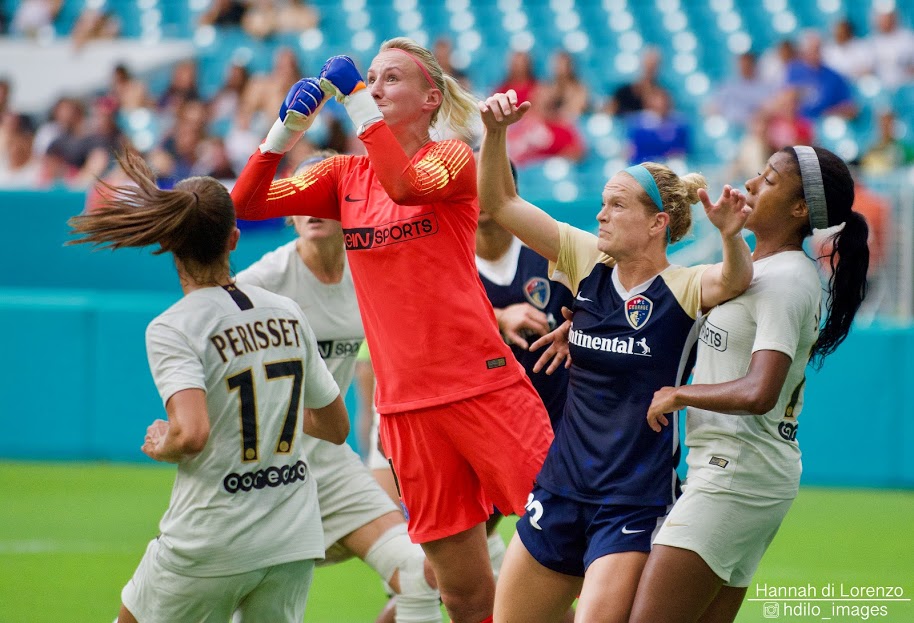 Former first-round pick Darian Jenkins’ first professional goal in the 84th minute handed the North Carolina Courage a 2-1 victory over Paris Saint-Germain in the first ever women’s match at the International Champions Cup. The NWSL Shield holders and runaway 2018 leaders will play in Sunday’s final against French and European champions Olympique Lyonnais, who pounded Manchester City, 3-0 in Thursday’s other semifinal.

The Courage were without six regulars — defenders Abby Dahlkemper and Merritt Mathias; midfielders Debinha, Crystal Dunn, Samantha Mewis, and McCall Zerboni — all playing for their national teams this week in Tournament of Nations. Dahlkemper’s replacement, Kaleigh Kurtz, an undrafted free agent out of South Carolina who coach Paul Riley has said, “would throw herself in front of a train for anybody,” wound up leaving an important mark on the match.

First Kurtz delivered the pass that put Jess McDonald through and in for the opening goal of the match. Then in the 40th minute Kurtz succumbed to pressure and scored an own goal that left the sides 1-1 at halftime. Kurtz was pressured into the blunder by Canadian teenager Jordyn Huitema who is playing the tournament for PSG as an amateur which will allow her to maintain NCAA eligibility.

Jenkins, the No. 7 pick in 2017 but in her first season after a leg injury kept her out all of last year, replaced McDonald in the last quarter hour. Six minutes from time she found herself on the end of a Lynn Williams cross for the goal that decided the match.

In the nightcap, Lyon’s stars came to play in a 3-0 dismantling of Manchester City. Eugenie Le Sommer tallied twice and then assisted on an Ada Hergerberg goal during a stirring opening 16 minutes.

Lyon, French champions 12 years running and European champs the last three, will face the Courage for the title on Sunday evening. The opener will be PSG against Manchester City for third.