Australia opens 2018 Tournament of Nations with comfortable win over Brazil 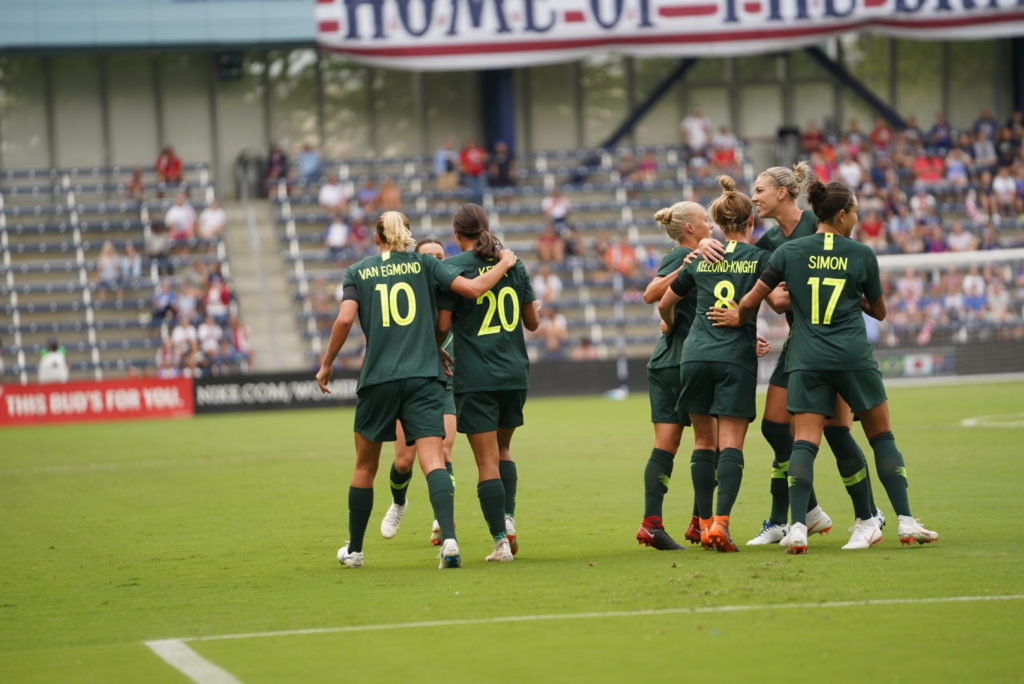 Defending Tournament of Nations champions Australia kicked off the 2018 competition on Thursday in Kansas City with a comfortable 3-1 win over Brazil thanks to a pair of well worked set-pieces and some poor Brazilian defending.

In a match that saw 13 NWSL players starting between the teams, it was Orlando Pride’s Poliana that opened the scoring with a headed own goal in the 9th minute, before midfielder Tameka Butt and the Chicago Red Stars’ Sam Kerr scored either side of halftime for the Matildas. North Carolina Courage forward Debinha scored 11 minutes from time off an assist from Marta from close range for a late consolation for Brazil.

The opening five minutes saw lots of the ball in midfield, with a Debinha left-footed effort from the left side of the box that went wide, the only effort of note.

Elise Kellond-Knight had already delivered some dangerous balls into the box for Australia before one of them paid off in the 9th minute.

A corner from the right-hand side was dangerously whipped in, and it was the unfortunate Poliana who got the vital touch, as she flicked a header past Barbara to score an own goal and give the Matildas the lead.

9' | A great cross from Elise Kellond-Knight forces an own goal to put @TheMatildas in front early in the match.

After the goal, Brazil started to play and control possession, but a frustrated Marta could not influence the game as much as she may have liked as her teammates struggled to get her into the match.

Australia almost went 2-0 up on 24 minutes when Tameka Butt headed over a close-range effort after a clever free-kick routine involving Kellond-Knight and Kerr.

It took the Brazilians half an hour to register their first effort on target, and it came from midfielder Andressinha, as she broke from midfield and unleashed a shot from the edge of the box, but it was a comfortable save for Lydia Williams in the Matildas’ goal.

Brazil’s inability to defend from corners came back to haunt them six minutes before halftime, when Barbara flapped at an Emily van Egmond set-piece, with the ball ricocheting off a Brazil defender to Tameka Butt, who headed home from close range.

38' | Another one for @TheMatildas! Corner kick taken by Emily Van Egmond and Tameka Butt was there to finish.

The second half didn’t take long to get going and less than five minutes in, Australia all but wrapped up the game following a deadly finish from Kerr.

A perfectly weighted through ball from Butt set Kerr away, and from the right-hand side of the box, she fired an unstoppable shot from close range past Barbara and into the roof of the net. It was a typical finish from the 2017 NWSL MVP.

The goal was Kerr’s 25th for her country.

50' | Tameka Butt threads a beautiful ball through Brazil's defense to find @samkerr1, who drills the top of the net to make it three.

Brazil arguably had the better of the game in the last 10 minutes, but other than an effort from forward Beatriz five minutes from time that was saved from close range by Williams, the South Americans couldn’t break down the stubborn Australia defense as the game finished 3-1.

79' | Brazil pulls one back! Marta dances past a defender and gets a low cross in, and Debinha is there to slot it home.

The second match day on Sunday will see Brazil look to earn their first win when they face Japan, while Australia will be hoping to repeat their win from last year over the United States when they meet in East Hartford, Connecticut.