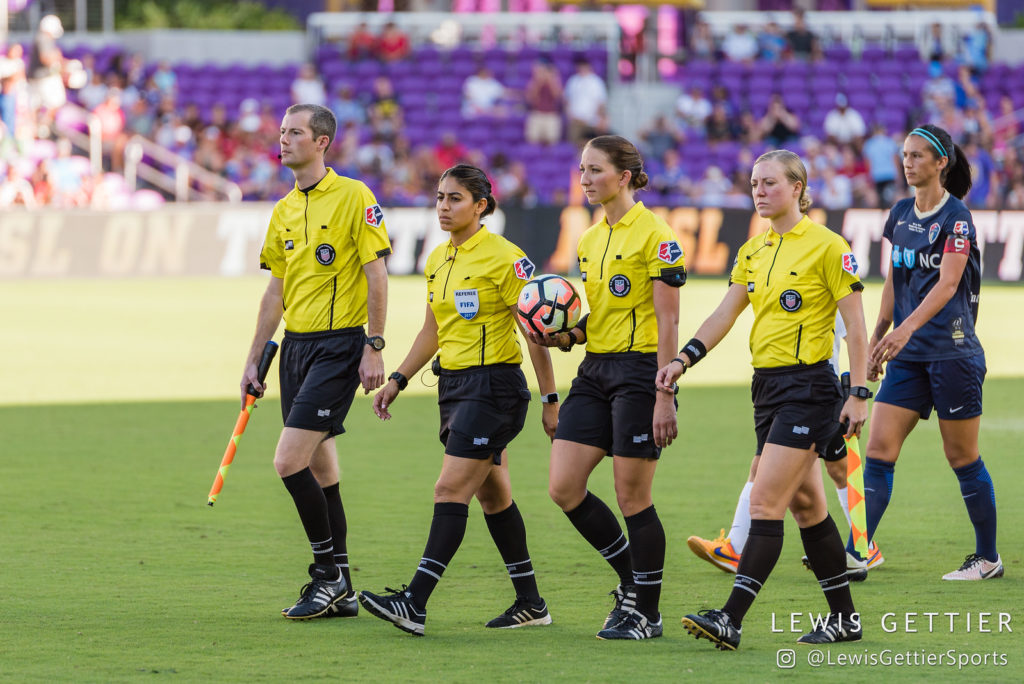 That the Brazilian legend succumbed to mounting frustration in the final seconds of another Orlando loss to Houston was not the cause for surprise. Nor was the actual action which produced it – shoving Rachel Daly near the face area, regardless of how forceful, is grounds for ejection. That a red card had finally come out at all over halfway through the league’s 2018 campaign was news in itself.

The preceding weeks saw a pair of dangerous – and, in one case, violent – plays in the league go under-punished, putting a microscope on an NWSL refereeing problem which has been brewing for years. Portland Thorns FC midfielder Meghan Klingenberg kicked out at Seattle Reign FC midfielder Allie Long seemingly within eyesight of the referee, the first assistant and the fourth official in a June 30 match. The incident was also right in front of the team benches and caught clearly on camera, but Klingenberg received only a yellow card. She was later suspended by the NWSL Disciplinary Committee for the following week’s match.

That’s a straight RED!!!! @NWSL not one but 2 refs missed that? That’s dirty and disgusting. pic.twitter.com/VUejBJxmsB

That following week, in a match between Portland and Utah Royals FC, Thorns midfielder Margaret Purce was sidelined for an extended amount of time after a brutal tackle from Utah midfielder Diana Matheson just before halftime. Center official Farhad Dadkho was only a few yards away from the studs-up challenge, but chose to only issue a yellow card. Matheson was later suspended by the NWSL Disciplinary Committee for the following week’s match.

Those around the league agree that these incidents were out of character for the players in question, and that they were still clear and obvious red-card offenses. But they were also part of a larger trend, perhaps the most egregious incidents in a season that has seen a bizarre number of dangerous, late or violent challenges go under-punished or unpunished altogether. It all has NWSL coaches not so quietly asking questions of the referees.

Over half of the coaches in the NWSL spoke to The Equalizer on the condition of anonymity, expressing both discontent with the level of officiating and confusion over what’s being done to improve it. Referee consistency, accountability and communication were central themes among coaches, who feel they have reached a breaking point in the homestretch of the league’s sixth season. Just like fellow owners demanding higher standards this offseason, and players recently speaking out about subpar conditions, coaches feel there has been enough of a grace period.

Access the best women’s soccer coverage all year long
Start your FREE, 7-day trial of The Equalizer Extra for industry-leading reporting and insight on the USWNT, NWSL and beyond.
Subscribe
Existing Users Sign In Here
Related TopicsExtraFeaturedPROSandra Serafini

Wednesday Roundup: Sky Blue FC waive Thaisa and Michaela Abam
The World Cup is farther away than it might seem: Why injuries mean more questions than answers for USWNT