NWSL Week In Review: Recognizing Nicole Barnhart as one of all-time greats 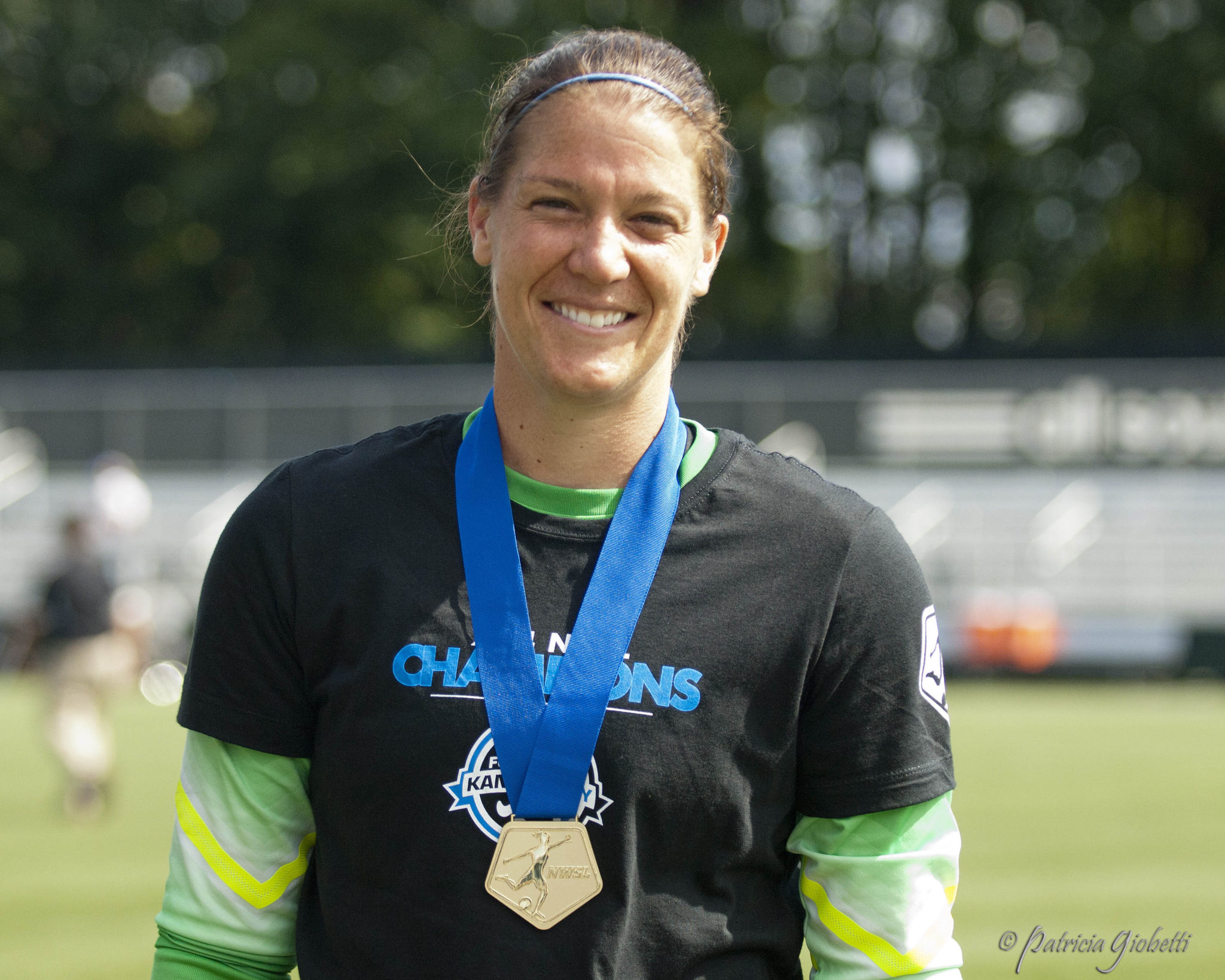 In a week where we lament the fact U.S. national team players were not allowed to participate (while other international players were), I feel it’s appropriate to recognize one of the more underappreciated players in the recent history of women’s professional soccer.

Nicole Barnhart made only four saves in posting a shutout Friday for the Utah Royals in a 0-0 draw with North Carolina, but like her career, that doesn’t really tell the whole story. At least two were extremely difficult and despite missing a plethora of U.S. players, the Courage kept the Royals under siege for most of the evening.

It was only Barnhart’s third appearance and second start of 2018, as she might be the player most affected by the untimely demise of the Boston Breakers last winter. Had that not happened, Barnhart would likely be the starting goalkeeper for Utah as she had for the franchise’s first five seasons in Kansas City. But up-and-coming youngster Abby Smith was available for selection, Barnhart was slightly injured at the beginning of the campaign, and so the job has been Smith’s.

At 36, Barnhart is 12 years Smith’s senior (almost to the day) and the oldest player in the NWSL by almost a year (with Joanna Lohman and Carli Lloyd next on the list). Her perseverance deserves plenty of credit to begin with. When she graduated Stanford in 2005 (where she still holds most of their goalkeeping records), the WUSA had recently collapsed, but along with Hope Solo (three months older), Barnhart was able to get some looks in the national team pool.

By the disastrous 2007 World Cup, Barnhart was on the roster as the third goalkeeper as Brianna Scurry and Solo got the playing time, and Barnhart was Solo’s unused backup for every game of 2011 World Cup, as well as the 2008 and 2012 Olympics (where she did get a gold medal in each). Barnhart was the starter for a time in 2010 when Solo was injured, but has never appeared in a major competition. Barnhart was eventually phased out of national team duty (mostly under Tom Sermanni) with the arrival of Ashlyn Harris and Alyssa Naeher on the scene.

Still, her club form has never really wavered. After four years of waiting, Barnhart played three seasons with FC Gold Pride, winning WPS Goalkeeper of the Year in 2010, along with a league title. She was NWSL Goalkeeper of the Year in its first season (2013), and won two more league titles in 2014 and 2015. She was excellent again in 2016, but – finally – showed a slight dip in form along with her team last season as Kansas City had its problems on and off the field.

With some irony, Barnhart was basically the antithesis of Solo in her career: never flashy, rarely spectacular either on or off the field, but extremely solid and consistent wherever she went. Barnhart rarely sought the spotlight and – for better or worse – was never truly thrust into it on a large scale. However, that should not diminish any of her accomplishments in her long career, particularly in a business where there just aren’t many long careers.

Barnhart got her chance this time because of an injury to Smith (who likely would have been called into camp if not injured), and while goalkeepers can obviously play longer than field players (or be Christie Pearce), might the last six matches of the season (Utah’s playoff hopes look slim at the moment) be the last hurrah for one of the all-time greats in women’s professional soccer history?

If it is, hopefully Barnhart will be remembered as she deserves to be, one of the greatest goalkeepers of all-time.

Subscribe to The Equalizer Extra for exclusive interviews, analysis and in-depth features

What did we learn in Week 17 of the NWSL season, where the U.S. players were relegated to tweeting good luck to their teammates?

What Went Down: The Royals escaped with a point, but it was hard to call this a good performance given that North Carolina was missing seemingly half its team (McCall Zerboni, Sam Mewis, Jaelene Hinkle, Abby Dahlkemper, Merritt Mathias), still outshot Utah 21-5, and the Royals desperately needed three points in the playoff race. They were missing lots of firepower in Christen Press and Amy Rodriguez, but looked fairly lifeless offensively.

For the Courage, Lynn Williams – even with a hat trick last week – still has her finishing problems, most glaringly shown late when she was a few steps ahead of Rachel Corsie with Jess McDonald on her left, but a poor touch allowed Corsie to catch up (and make a great sliding tackle). But if Williams doesn’t make the bad touch, it’s likely a goal. Nitpicking, I know, but that’s all I have.

Player of the Game: Nicole Barnhart – She only had four saves, but – as I wrote – two of them were excellent and necessary.

Under the Radar: Meredith Speck – Perhaps the most amazing thing about North Carolina’s run lately is its ability to just plug seemingly random players into spots and watch them excel. In this case, it was Speck at right back having an excellent outing. Of course, if it were so easy, every team would be able to do it and they can’t, so these players do deserve plenty of credit.

Inside the Numbers: 0 – Number of yellow cards issued in the contest as there were only 14 fouls called total in a clean game.

What Went Down: Paul Riley will probably (deservedly) win Coach of the Year, but Vlatko Andonovski deserves a lot of credit for what he’s done in Seattle, and this game was a prime example. Orlando lost less than most to the U.S. (Alex Morgan, Ashlyn Harris), and has a little more depth to work with. The Reign were so thin that they started Rumi Utsugi and Beverly Yanez despite both having minor injuries and, sure enough, both had to be replaced with Seattle already down a goal in the first half.

And then, on a humid afternoon, Seattle dominated the second half anyway, eventually getting the equalizer through Jodie Taylor on a beautiful goal. Andonovski has largely gone with the same back four all season and that has seemed to play dividends with another solid performance. It’s another two points dropped in what is turning out to be a disappointing summer, but all that doesn’t matter, of course, if they can get into the playoffs and save their best for last.

We have the highlights from the 1–1 draw in #ORLvSEA ⤵️ pic.twitter.com/slZ9EV8c6l

Player of the Game: Jodie Taylor – She still had her finishing troubles, but she did get her goal and seems to be closer to breaking out, registering four shots on goal and forcing a couple of good saves out of Haley Kopmeyer. If the Reign are to win in the playoffs, they will need her.

Under the Radar: Morgan Andrews – Andrews has had a very difficult time adjusting to the NWSL and therefore her playing time has been scarce since moving to Seattle. But pressed into action for 65 minutes due to the injuries, Andrews held her own, especially in the second half when Seattle played at their best.

Inside the Numbers: 98 – Heat index at kickoff for this contest, which hopefully will be the last afternoon kickoff in Orlando (at least in the summer months) ever.

What Went Down: We all know things have been horrific for Sky Blue this season, but it does take a good deal of bad luck to go 0-13-3 (and 0-8-1 at home) through 16 games. Two dreadful defensive mistakes (one from Caroline Casey, who was given the start over Kailen Sheridan) in the first eight minutes made it appear as if the Thorns would run them over. Instead, Sky Blue got stronger and stronger as the weather deteriorated (and we could barely see the game through the rainy camera lens). Shea Groom hit the inside of the post and then Portland survived a wild scramble in the closing seconds to survive.

For the Thorns, getting outshot 18-8 by a winless team will not inspire complete confidence, but we’re at the point of the campaign when style points are not terribly important. There are some worries about Portland’s defense (which was without Emily Sonnett and Adrianna Franch) as Sky Blue kept pouring on the pressure, but should they escape without injury, they should have everyone back for their showdown with North Carolina on Aug. 5.

Player of the Game: Hayley Raso – While she didn’t do much in the second half, both of Portland’s early goals were a result of Raso pressuring and wreaking havoc in the final third, and that’s what she does best.

Under the Radar: Imani Dorsey – It took a while for Dorsey to break into the starting lineup, partly because she had to finish her degree at Duke before joining the team. But she’s making a late push for Rookie of the Year with another outstanding performance.

Inside the Numbers: 11 – Record for lowest number of points in an NWSL season, set by Boston in 2016. But that was in only 20 games as well.

What Went Down: Unfortunately, we had no video in this one after it was postponed to Sunday morning due to miserable field conditions after several inches of rain in Maryland. We know that Rachel Daly scored in the third minute when Aubrey Bledsoe got caught in two minds on a Sofia Huerta cross. And we know Washington put a good deal of pressure on the Dash goal at times and put nine of them on goal, but could not beat Jane Campbell.

The Spirit are now 0-7-2 in their last nine in what has turned into a miserable, miserable season. They are also now 12 points behind seventh in the table, which is not Houston, but Utah (with both of them having played the same number of games). The Dash are six points out of a playoff spot, still a longshot, but they showed again in this one what they like to do: defend and look to counter, preferably through Rachel Daly.

Player of the Game: Amber Brooks – Again, we only have bits and pieces, but Brooks has asserted herself as one of the top center backs in the league this season, and even without Janine Van Wyk (who left with a first-half injury), the Dash posted another clean sheet.

Under the Radar: Rachel Daly – If Houston had a few more points, would Daly be a serious contender for MVP?

Inside the Numbers: 0 – Minutes for Mallory Pugh, but she was on the bench, meaning Washington might actually have all its attacking talent when they return in two weeks?