The Lowdown: The Courage are in a race against themselves 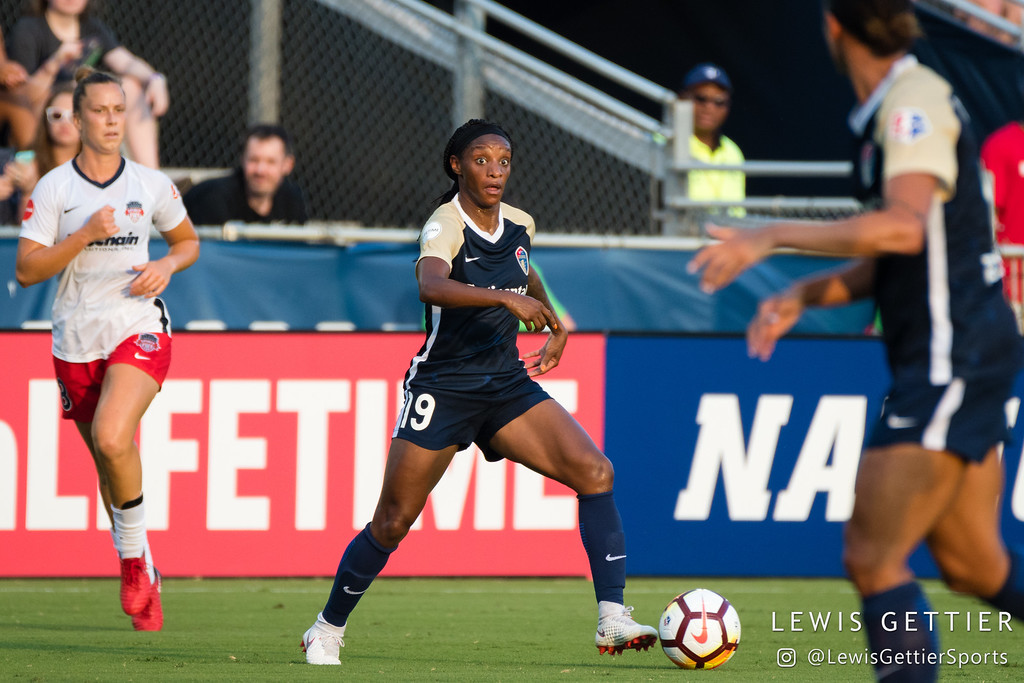 Crystal Dunn and the Courage have eyes wide open heading into the final six matches of the season. (Photo copyright Lewis Gettier)

Ben Comen was a cross-country runner at Hannah High School in South Carolina in the middle of the aughts. And he has been the subject of inspirational talks by Paul Riley to the North Carolina Courage this season. If that seems an odd connection to make, consider that Comen has cerebral palsy, and that his high school athletic career was less about winning—not about winning at all, in fact—and more about perseverance.

“He trips over, and he can’t run, but he runs against himself,” Riley explained with the enthusiasm of a man who had just spent the afternoon watching Ben Comen run, not discussing something more than a decade old. “So everyone finishes the race after 25 minutes; he finished after 45 minutes. So after 25 minutes, they all come back and help him run. He’s on his own. He’s racing against him.”

And there is the correlation. Comen may have been the slowest cross-country runner in his county, but he was out there racing against himself. (For more see this outstanding profile by Sports Illustrated’s Rick Reilly from 2003.) The Courage are out in front—and they are racing against themselves.

“We’re racing against us,” the North Carolina head coach said following Saturday’s 4-0 win at Sky Blue FC. “There’s nobody else that we’re racing against. It’s about us. We’ve got a mini lead here and we’re gonna play all eight teams—we’ve seen the bottom two, we’re going to move our way up.” (In RileySpeak, that means the final eight Courage matches were spread out among the other eight NWSL clubs, and they played the bottom two teams last week, leaving the other six.)

“We’ve got to get better. These teams are going to adapt to us and they’re going to give us different looks and different things. It’s a great challenge for us.”

Riley’s mention of a “mini lead” is a stretch, and likely an intentional one. The Courage have won 14 of their 18 matches this season, losing only once. They have 45 points and are already in the playoffs. If they win Friday night in Utah and the Reign lose or draw the next day in Orlando, the Courage will clinch the Shield—in July. Speaking of the Reign, the Courage are averaging 2.50 points per match, which is a full 0.25 better than the 2014 Reign, whose regular season is the current standard bearer for NWSL.

Back to Saturday in New Jersey. The Courage led 1-0 at halftime against a Sky Blue team that is staring at a historically bad season. It wasn’t nearly good enough.

“Paul just ripped us at halftime to be honest,” Heather O’Reilly said after her third match in a Courage uniform. “It wasn’t our first-half performance that I think is the standard for this group. It’s just about ourselves getting better.”

“I was not happy at halftime,” Riley confirmed. “Irrespective of the score it’s all about performance for me, we never look at the score. The first half we lost every tackle, every 50/50. We didn’t read the game well. We didn’t tackle well. We didn’t win the first ball, the second ball, we didn’t cover well…”

And on he went. “I just keep telling them you can’t rest on your laurels, it doesn’t matter who you’re playing against. Anyone in this league can win. At halftime I had a go at them—first time all season to be honest with you. And we got a great reaction [in the] second half. All I expect is to control what can be controlled. You control your own effort.”

Riley got what he wanted and cited an early second-half play by Denise O’Sullivan, who imposed her will on a Sky Blue players to win a ball and set the tone for the half. Forty-five minutes and one Lynn Williams hat trick later, the Courage had another lopsided win. Since slipping up against the Royals, the Courage have now won five games in a row by an aggregate of 17-2.

“I told them at halftime,” Riley said, “Ben would not be ****ing happy with this first-half performance. You need to go against yourself. You battle yourself every single day to get better. That’s who you battle. It’s not about anyone else in the league other than yourselves. You fight yourselves until the end of the season. I don’t think you’ll see much complacency.”

Here is the full text of Riley’s team talk ahead of the Sky Blue match, printed with permission: 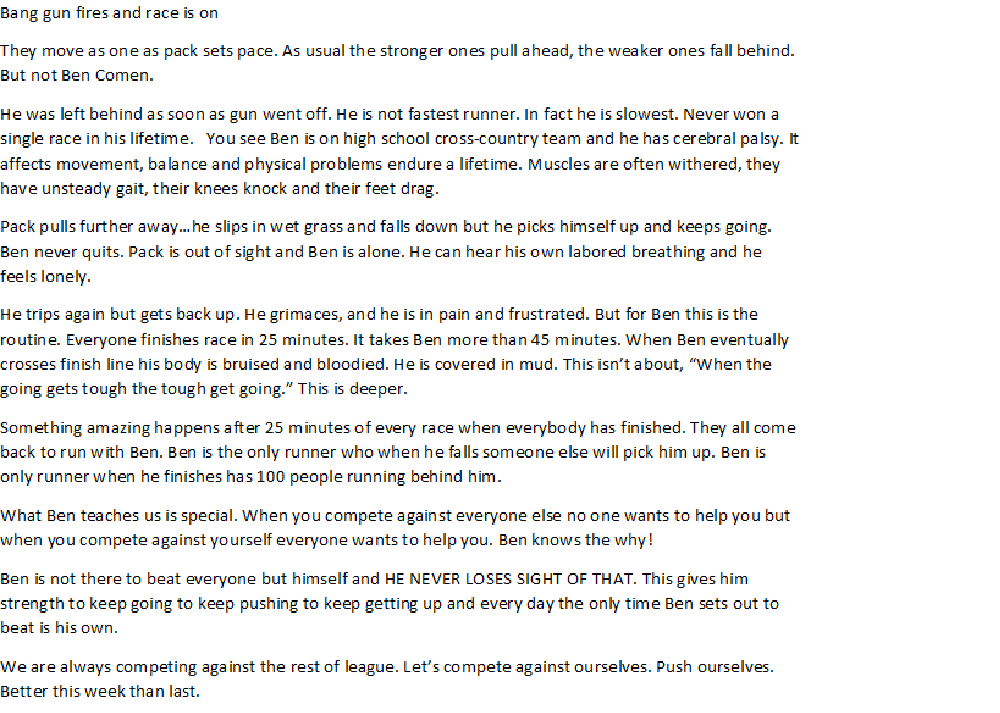 — Sky Blue head coach Denise Reddy and captain Carli Lloyd were both given a chance to comment on the whirlwind created by Sam Kerr’s postmatch comments a week earlier (this was before The Equalizer’s story came out this week). Reddy: “No comment.” Lloyd: “I really don’t have any comment. I just focus on playing.”

— Sky Blue are now 15 games into the season and have neither won nor had the lead. Both are league records.

— It was not a good weekend for goalkeepers. Abby Smith probably had the worst weekend not only because she wandered into an indefensible position while allowing Kristen Edmonds to score the game-winner, but she later left the game injured after a collision that she more or less caused. The Royals have not released any information on Smith’s health. Not to worry though, as Ashlyn Harris, Kailen Sheridan, Jane Campbell and Adrianna Franch were all in on making keeper errors during Week 16.

— Ali Krieger is the latest NWSL player to reach 100 regular-season appearances. Many of us, especially those who were on the frontlines for the death of WUSA and WPS, rejoiced last season when clubs and then players reached the century mark. Now we’re at the next phase where we are unfazed every time a player reaches triple figures. Krieger deserves much credit, though, having transitioned away from being an allocated player. She was also the first U.S. player to break the mold when she returned early to play for the Spirit in a make-up match following the 2016 Olympics.

— Lynn Williams had her first NWSL hat trick on Saturday and walked through the mixed zone without being stopped. That’s a first for me.

— Laura Harvey’s referee rants were certainly entertaining, and I will reiterate that I see no reason for her to be fined (she will be though nothing has been announced yet.) The two issues I have are as follows: one is, I disagree with her assessment about the penalty call that went against the Royals on Saturday. Two is, she admitted the team never recovered from the penalty even though they were in the locker room for halftime just a few minutes after. A good team should be able to shake that off.

— All that said, Harvey (and other coaches) is correct that officiating can be an issue in NWSL. But consider the Men’s World Cup final on Sunday after which the Croatian coach said the penalty awarded to France should not have been called in that spot, and you’ll see that referee complaints go right to the very top levels of the sport around the globe.

— All THAT said, the bigger problem for the Royals may be the absence of Becky Sauerbrunn on defense.

— Do you think Rachel Daly was proud of herself for enticing Marta to get the first red card of the season?

— Lots of nuance, as I discussed several weeks ago, but the more I think about it the more I’m convinced that it’s just flat wrong to pull the U.S. players for this weekend’s games. And consider this — news that these players will miss the weekend has been subtly floated by coaches and reported by me and other media members. Has anyone from the league or U.S. Soccer bothered to let anyone know about this?