The Lowdown: The most indispensable players on all nine NWSL clubs 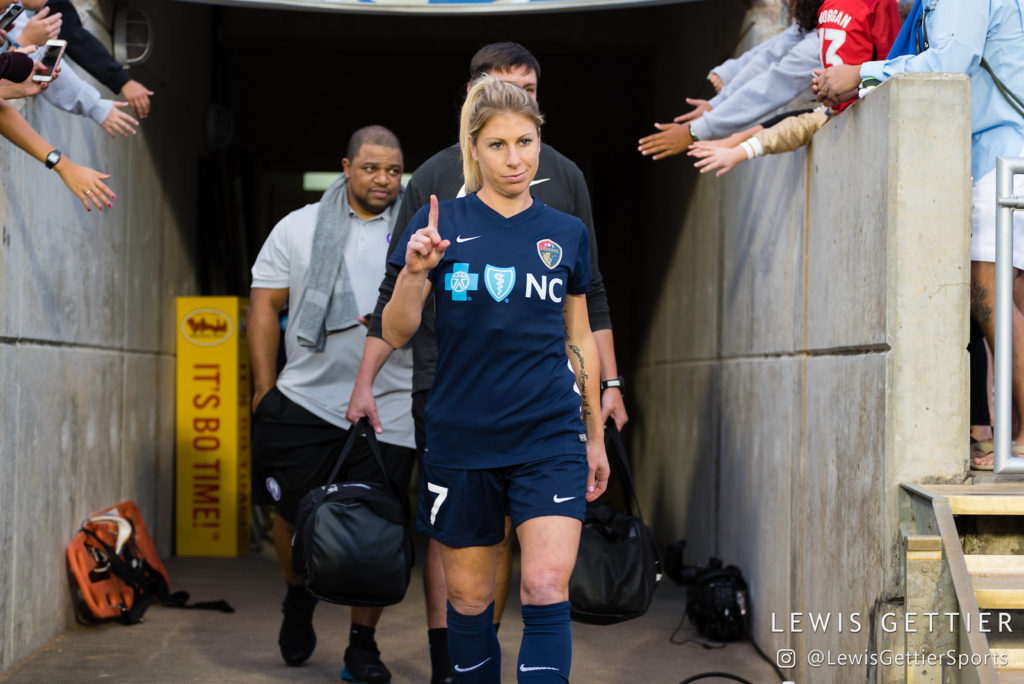 The National Women’s Soccer League season is approaching the two-thirds mark and at there are fewer and fewer scenarios in which the North Carolina Courage won’t win the Shield, or that the Washington Spirit or Sky Blue FC will make a push for the playoffs. But the other five teams are separated by five points, and the Houston Dash have recovered from an atrocious start to reach the fringes of playoff contention. Of those six, only half will play beyond the regular season.

With that in mind, this week I look at one player from each team who has been the most indispensable, and one who will need to be better for each team to take the next step.

Indispensable – McCall Zerboni: It’s tough to narrow it down on a team this good, but Zerboni is the one that has made things happen through her extraordinary work rate in the midfield which hardly missed a beat while Samantha Mewis was out. Zerboni is also a perfect extension on the field of the Paul Riley Way that keeps the Courage motivated even as they breeze through the regular season.

Longing for more – Abby Dahlkemper: The reigning NWSL Defender of the Year hasn’t been quite the same player this season, and for the first time as a pro has shuttled in and out of the lineup, due to knee pain. If she can rediscover 2017 form, the 12-1-3 Courage could be even better down the stretch.

Indispensable – Megan Rapinoe: This one is fairly obvious as a run of career-best form for club and country has Rapinoe squarely in the MVP discussion.

Longing for more – Jessica Fishlock: Fishlock has not played in several weeks and there is a certain something missing from the Reign when she isn’t there. It has been an injury-riddled season for Fishlock even when she has been on the field, but the Reign are certainly missing her box-to-box energy in the middle of the park. Honorable mention here to Jodie Taylor, who has suddenly scored in consecutive matches—both Reign wins.

Indispensable – Marta: She proved it again Saturday night against Washington. The most dynamic one-v-one player the game has seen took matters into her own hands by taking what appeared to be a dangerous but complex situation and winning the game by twice deking Whitney Church and then beating former teammate Aubrey Bledsoe at an impossible angle high and toward the tightly-guarded near post. It has not been the most productive season for Marta, but she is still the most dangerous offensive player around and one who demands the full attention of opposing defenses.

Longing for more – Alex Morgan: Last year, Morgan was the final piece of the offensive puzzle and when she got rolling, so did the Pride. If she can find that form again the Pride could be the team mostly likely to bump off the Courage in September.

Indispensable – Katie Naughton: Laugh if you want, but Naughton has been a quiet key to two of the most important personnel decisions the Red Stars have made the last two seasons. Her proficiency as a center back allowed Julie Ertz to move into midfield in 2017, and then to put Sam Johnson in the recent trade. Naughton is not the best player on the Red Stars — she’s not even the best center back — but in many ways she has been the most important player in the side. That said, the partnership between Sam Kerr and Yuki Nagasato is on the verge of becoming special.

Longing for more – Morgan Brian: If Brian can get healthy, stay healthy, and play anything like she did around the time of the 2015 World Cup, the Red Stars could become the most dangerous team in the NWSL, at least in the starting lineup. It is fair to question whether or not this will ever happen again, but we know the talent is there and Brian is still only 25. 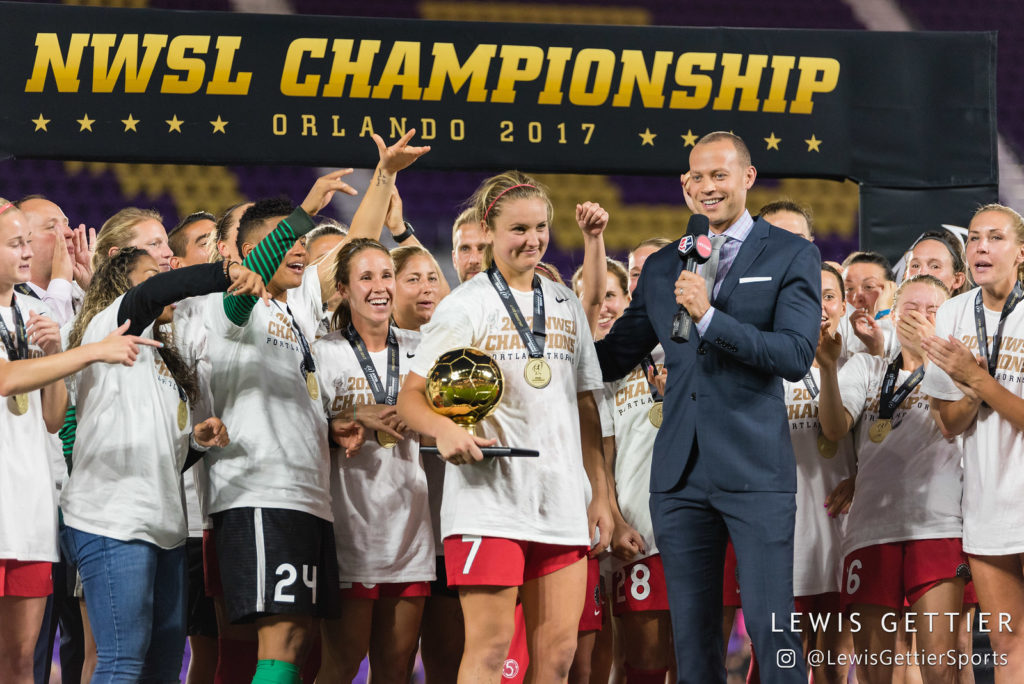 Portland Thorns midfielder Lindsey Horan (7) is awarded the Golden Ball as the MVP of the 2017 NWSL Championship Game between the NC Courage and Portland Thorns FC in Orlando, FL. Photo by Lewis Gettier.

Indispensable – Lindsey Horan: You could just as easily put Christine Sinclair in this spot because the pair has been carrying the club along with Tobin Heath, when she has been in the lineup. Horan plays both ends of the midfield and is virtually unmarkable in the air as the Utah Royals found out last Friday.

Longing for more – Emily Sonnett: The central defender has had some extraordinary moments but also some lapses that have led to conceding goals. Shuttling in and out of the lineup likely hasn’t helped, but if the Thorns are going to regain their identity as the toughest team in the league to break down, they’re going to need a more consistent Sonnett the rest of the way.

Indispensable – Becky Sauerbrunn: I recently asked Laura Harvey if she thought that Sauerbrunn’s foot injury was a blessing in disguise, in that it allowed the player to be off in January and February. Harvey said she hadn’t thought about it, and maybe the question was unfair since they have never been coach/player together before. I think it did Sauerbrunn a world of good as she has followed up two seasons of being merely outstanding by returning to otherworldly.

Longing for more – Amy Rodriguez: There, I said it. It isn’t like she is playing below expectations — considering she essentially missed two-and-a-half years to have a baby and then have her torn ACL repaired. At the same time, I don’t see the Royals being one of the top four teams at season’s end without more consistent contributions from A-Rod.

Indispensable – Amber Brooks: A calming presence early in the season when things almost went entirely off the rails, Brooks is quietly one of the more reliable center backs in NWSL and is one of the club’s few consistent elements of the past several years.

Longing for more – Sofia Huerta: She has been great so far since being acquired from the Red Stars. If she can keep it up, and Kealia Ohai continues to improve as expected, the Dash could actually have enough offense to overcome the occasional — or, at this point, inevitable — defensive disaster.

Indispensable – Aubrey Bledsoe: Not much has gone right for the Spirit, but it could be a whole lot worse if not for Bledsoe being the last line of defense. On two occasions she helped secure draws on days the Spirit did not score a goal.

Longing for more – Andi Sullivan: The rookie midfielder has been decidedly average as part of a group that has been badly outplayed more often than not. And she took a poor penalty, saved by Kailen Sheridan, late in a 0-0 draw at Sky Blue. 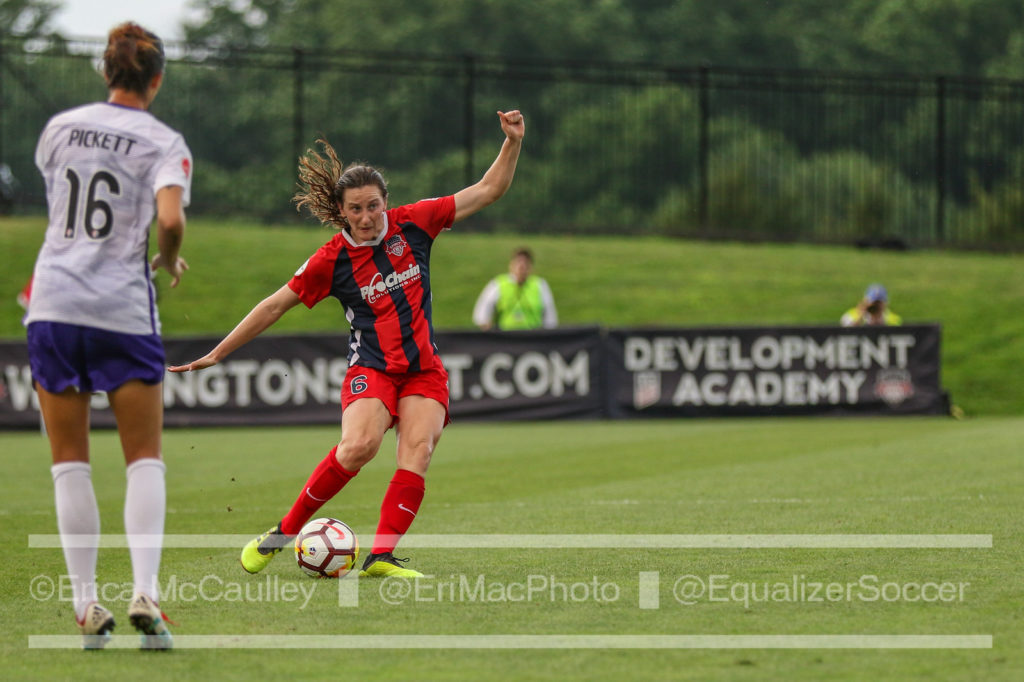 Indispensable – Carli Lloyd: They’re 0-11-3, so is anybody really indispensable? It may have been Rebekah Stott before she got hurt. In her absence it is Lloyd who has dutifully performed her role while scoring the occasional goal all while the team falls apart around her, on the field and quite possibly off it as well.

Longing for more – Shea Groom: Again, they’re 0-11-3 so it’s not like one player is going to shoot them to the middle of the table by improving her performance. Groom has been hesitant to take her shot when inside the opponent’s penalty area and has not been able to impose her will on matches with her physical play as she did at times in Kansas City.

— Congratulations to McCall Zerboni on becoming the first NWSL player to log 10,000 regular-season minutes. While the milestone is at least partly attributed to her lack of activity with the U.S. national team it is a testament to her durability and dedication. And for those of us who saw two leagues crumble after three seasons, every new statistical landmark is a nice reminder of how far we have come.

— Does anyone think Jaelene Hinkle has a chance to be in Tournament of Nations camp? I wouldn’t dismiss the idea.

— Unpopular take here but the Dash are not playoff contenders. They have done fabulous to get into contention after a wretched start but they are clearly not on the same level as the five teams immediately ahead of them. They are moving in the right direction though.

— Sky Blue now have 14 straight matches without a win which has erased the 2013 Washington Spirit from the record books. What’s more amazing than that is that the team has yet to be in front in any game. That is 1,260 minutes of soccer without ever being in front. Their reward is a visit from the first-place Courage who have outscored opponents 11-2 in three straight wins since their only loss of the season.

— Every time I watch Crystal Dunn play I find myself saying: “Why doesn’t she play (insert position) every week?” It doesn’t matter what line she’s in. That said, if she is on with Lynn Williams and Jess McDonald, Dunn should be underneath those two always and forever.

— Laura v Vlatko XVIII is Wednesday night and it will double as Laura Harvey’s return to Seattle for the first time since guiding the Reign through five seasons and winning two Shields. When she left, Harvey recommended Vlatko Andonovski as her replacement and ownership quickly moved in and hired him. Can you name five better current coaching rivalries in North American professional sports?