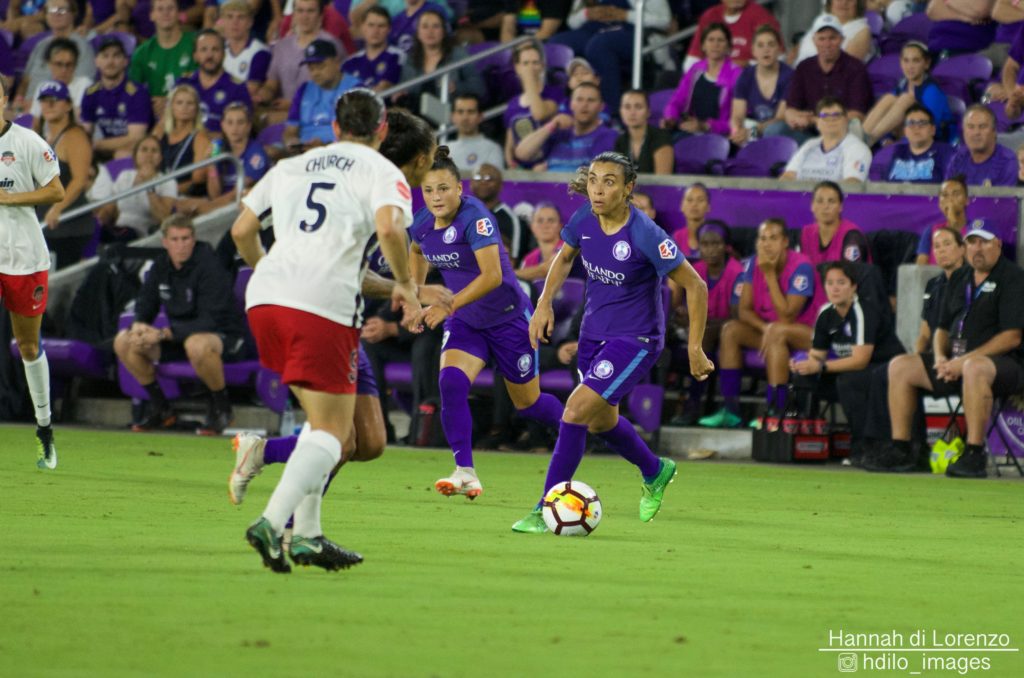 In the final match of the weekend, the Reign hosted the Dash in a match that could’ve proven tricky for both teams. Houston tried to play spoiler, but ultimately the home team walked away with the full 3 points, taking a 3-1 victory behind goals from Jodie Taylor, Megan Rapinoe, and Allie Long (and an opener for Houston from Amber Brooks.)

Houston has been something of an enigma in the past few weeks, and they came out on the front foot for the beginning of the match. The effort culminated in the opening goal in the matchup, an Amber Brooks header off a corner kick sent in by Sofia Huerta in the 12th minute.

The early goal set Seattle back on their heels a bit, and they struggle to come up with the counter despite possessing well in the midfield. They did eventually come up with the equalizer, a brilliant chip from Jodie Taylor. The sequence began with a quick throw-in from Megan Rapinoe, who utilized the slow positioning from Houston in a dead ball situation, and Taylor had plenty of time to make a decision to lob the ball over Dash keeper Jane Campbell and into the back of the net.

Up and over! @Jodes_14 with the finish to even it up for @ReignFC.#SEAvHOU | #NWSL pic.twitter.com/FszlVb9YJa

The score-line would hold going into halftime, and both teams came out of the half looking for an advantage. It would ultimately be Seattle that struck next, when Elizabeth Addo was brought down in the Houston box by Allysha Chapman, drawing a penalty for the Reign. Megan Rapinoe would slot the shot away with professionalism, and the hosts suddenly had the lead in the 56th minute.

Houston would look for an equalizer throughout much of the rest of the half, but they couldn’t get enough separation from the Seattle defense to provide many dangerous looks in front of goal. After weathering the storm for almost a half hour, the Reign put the match to bed in the 84th minute, when Rapinoe slid the ball through the center of Houston’s defense to find the run of Allie Long, who had no problem tapping the ball in to create the final 3-1 scoreline of the match.

The Dash will look to bounce back against the Orlando Pride on short rest on Wednesday the 11th of July, and the Reign will host the Utah Royals on the same evening.

Sam Kerr returned to haunt her old club as she scored a hat-trick for the Chicago Red Stars in a 3-1 win over rock bottom Sky Blue FC. The defeat for Sky Blue broke an unwanted NWSL record of 14 games without a win, overtaking the Washington Spirit side of 2013, who went 13 games without tasting victory.

The game saw the return to Yurcak Field of Kerr and Nikki Stanton following their trade to the Red Stars during the off-season, and it was the visitors who started the brighter, with Kerr weaving her way through the Sky Blue defense to win an early corner. At the other end, Imani Dorsey was denied by Alyssa Naeher when she was played through one-on-one by Carli Lloyd on seven minutes, before minutes later, Kerr was denied in her own one-one situation by keeper, Kailen Sheridan.

Kerr’s pace was proving a problem for the home side as she was denied twice in a minute by Sheridan and a last-ditch tackle by Mandy Freeman, before Yuki Nagastao was also shut out by Sheridan just a few minutes later. Australian Kerr’s persistence paid off five minutes before half-time when she found some space at the top of the box, before firing off a right-foot shot that deflected past Sheridan into the bottom left hand corner.

Julie Ertz almost made it 2-0 from close range after a Danielle Colaprico free-kick eventually found its way to her, but after she was denied, it was the home side that almost leveled right on half-time.

Savannah McCaskill broke down the right-hand side and slid a ball across the box to her fellow attacker, Dorsey, but her blasted effort was brilliantly saved by Naeher.

The second-half was only seconds old when Kerr doubled Chicago’s lead after she received a Nagasato pass and rifled an effort past Sheridan into the bottom-corner.

The same combination worked together again in the 63rd minute as Nagasato slid a pass through for Kerr and one-one-one with Sheridan, she easily slotted past the Canadian to claim her hat-trick and her eighth goal of the season.

Hats off to Sam Kerr. It's a hat trick at Yurcak, and @chiredstarsPR are up 3–0.#NJvCHI | #NWSL pic.twitter.com/sCBPl4PEcu

Carli Lloyd tried to get her side back into the game but fired over when she should have hit the target a few minutes after Kerr’s third. Sky Blue did score a consolation on 73 minutes when a well worked move was finished by rookie Imani Dorsey, who deserved her goal following some good overall play.

That finished the scoring, with the win for Chicago taking their record to 6-4-7, moving them back into the play-off spots and third place. While the loss for Sky Blue leaves them a desperate 0-11-3 in last place. Chicago hosts Seattle next Saturday, while Sky Blue hosts North Carolina.

Alex Morgan was missing from this match with a calf injury that saw her exit last week’s match early, although she did make an appearance in the broadcast booth. Orlando dominated the match early and tested goalkeeper Aubrey Bledsoe, but good work from the keeper and their own lack of finishing and combination play kept them off the scoreboard.

On one of their few attacks, the Spirit earned the first corner in the 25th minute. Whitney Church took it, sending the service far, where Ashley Hatch rose above her defenders and headed it in at the open post. This was the Spirit’s first goal since their 3-2 loss in Houston in late May.

.@ash_hatch33 rises above the rest and gives @WashSpirit the lead on the road!#ORLvWAS | #NWSL pic.twitter.com/2szYwJtUId

The Pride continued to press the attack for the remainder of the half but couldn’t find the back of the net until stoppage time. Alanna Kennedy recovered a loose ball and passed it up to Sydney Leroux, who took it endline, cut back, and slotted it past Bledsoe at near post, a difficult angle to finish.

.@sydneyleroux equalizes for @ORLPride right before the break. All evened up at 1–1 heading into halftime!#ORLvWAS | #NWSL pic.twitter.com/FV2KGwWYWM

The second half saw more of the same. Both sides preferred to skip their midfields more often than not, going wide or sending long balls. The woodwork made an appearance on either end, with the post denying Estefania Banini the lead and the crossbar doing the same against Kennedy. Both sides also saw a welcome return, with Camila making her first appearance since tearing her ACL last season, and Rose Lavelle joining the match for the last 15 minutes.

Controversy erupted in the 76th minute when Weatherholt found the back of the net, but the goal was nullified by a whistle for a foul prior to the shot. Camila was judged to have tugged on the arm of Tori Huster. Although the replay showed minimal contact, Huster went down and had to have her wrist wrapped before continuing. Orlando assistant coach Khano Smith was ejected immediately following the call.

The game looked to be headed for a draw, but Marta said otherwise. In the 86th minute, she received the ball from Leroux and headed upfield with plenty of space. Inside the box, facing down Whitney Church, Marta sent the defender first one way, then another, and then another before taking the shot and chipping Bledsoe at the near post.

Sometimes we have no words. You just need to see this goal from Marta. @ORLPride take the lead late at home.#ORLvWAS | #NWSL pic.twitter.com/FOxP6nGm55

Orlando improves to 7-5-4 and takes second place. They will travel to Houston next Wednesday. Washington remains in eighth place at 2-10-4 and travels to North Carolina next Wednesday.