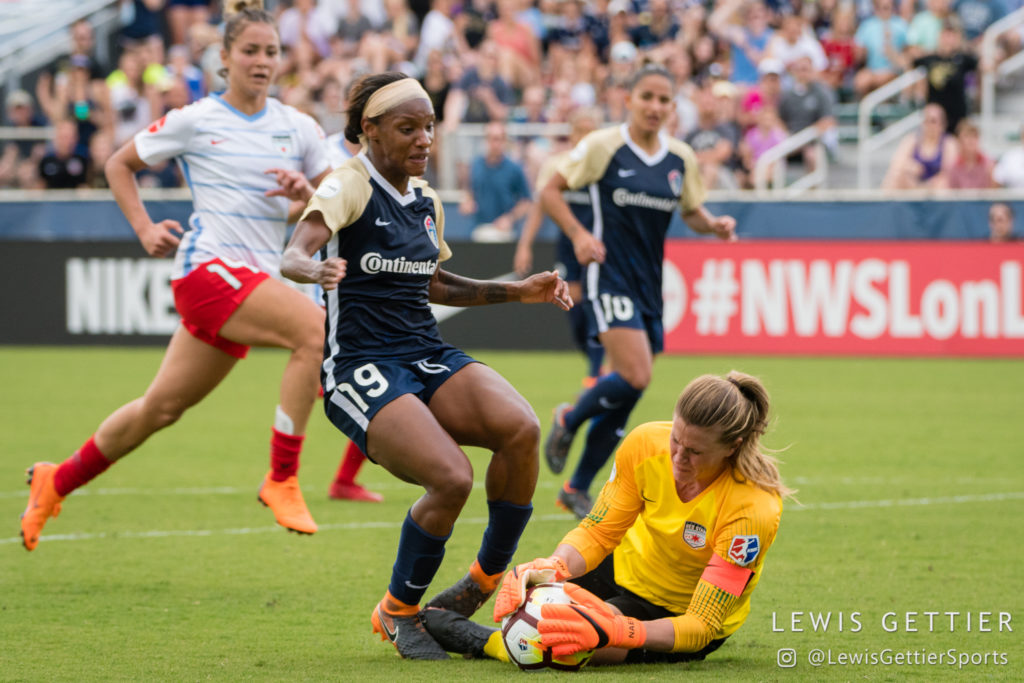 North Carolina continued their winning ways on a rainy Fourth of July evening, overrunning the Chicago Red Stars 4-1 courtesy of goals from Crystal Dunn, Lynn Williams, Debinha, and Kristen Hamilton. Chicago pulled one goal back in stoppage time due to a penalty strike from Yuki Nagasato.

The Red Stars hung in with North Carolina for much of the first 20 minutes of the match, with Sam Kerr missing a 1v1 with Katelyn Rowland early in the game. However, 20 minutes was all it took for the Courage to find their feet and pull ahead.

It took Dunn placing the perfect ball past Alyssa Naeher’s near post from the top of the box to break the deadlock, but it pulled NC up 1-0, and some of the air let out of Chicago’s attack, though the half would end with that 1-0 scoreline. (Dunn’s strike put her at seven goals on the season, tied with Christine Sinclair for the lead in the 2018 Golden Boot race)

In the second half, North Carolina took over, and in quick succession. Lynn Williams had a golazo of her own in the 67th minute, firing a rocket from the top of the box into Chicago’s upper 90. That momentum pushed the Courage further into the Red Stars defensive third, and Debinha got a quick follow up in the 69th minute, scoring off a rebound from a shot from Williams. Suddenly a manageable deficit of one goal had become three, and North Carolina started to run away with the game.

Lynn Williams comes through with the second half strike to double @TheNCCourage's lead!#NCvCHI | #NWSL pic.twitter.com/8dlT5xD0fy

The second half of the match would also see the return of Heather O’Reilly to the NWSL, making her North Carolina debut in the 75th minute. And it would be the Courage subs that would push for their fourth and final goal, that ultimately came in the 87th minute. Williams again created an opportunity, working the ball to the end-line, where she found Kristen Hamilton streaking in front of Chicago’s goal for the tap-in.

After Hamilton’s strike, it looked like the Red Stars would suffer the worst defeat at the hands of the Courage as compared to Seattle, Portland, and Orlando, but a foul called on Abby Dahlkemper in stoppage time resulted in a Yuki Nagasato penalty. Nagasato took the pk cleanly, and Chicago walked away with a respectability goal in the final moments of the match.

Chicago will look to bounce back against Sky Blue on Saturday, July 7th. North Carolina will get the weekend off, and continue their campaign against the Washington Spirit on Wednesday July 11th.