Kerr continues to rack up awards for her performance for club and country (photo: Perth Glory)

Chicago Red Stars and Australian international forward Sam Kerr was named PFA’s Women’s Footballer of the Year for the second time in a row.

In the NWSL, she set a new league scoring record with 17 goals in a single season, won the league MVP award, and became the all-time leading scorer in NWSL history.

For the Matildas, Kerr has been instrumental, specifically in their triumph at the Tournament of Nations in the United States last summer where Australia won the tournament ahead of the USWNT, Japan, and Brazil. Kerr was the leading scorer of the tournament with four goals.

The 24-year-old was also named the AFC Women’s Footballer of the Year. Additionally, she won the Julie Dolan Medal for the 2016/17 season and joint winner for the 2017/18 season as a result of her success in the W-League. She was also awarded Young Australian of the Year as well.

Also honored at the PFA Players Awards was Adelaide United’s 19-year-old midfielder Alex Chidiac as she took home the award for Young Women’s Footballer. Like Kerr, this was the second year she had won the award. She scored her first senior international goal for the Matildas against Thailand during a friendly in Perth ahead of the Asian Cup.

Today, the Orlando Pride announced that they have waived Swedish defender Lotta Ökvist.

Ökvist first signed with the Pride on March 21 after she was acquired by Orlando in a trade with the Houston Dash in exchange for Orlando’s third round pick in the 2019 NWSL College Draft. The 21-year old was selected by the Dash in the 2018 Dispersal Draft after the Breakers folded in January.

“Lotta has been an outstanding professional with a terrific attitude during her time with the Pride,” Orlando head coach Tom Sermanni said in the club’s official release. “With her game time being limited, we felt it was better for her to take an opportunity in Europe where she will see more playing time. Her personality and character will be missed around our team. We wish her the best of luck.”

Prior to joining the NWSL, Ökvist played for Swedish clubs Umeå IK and Piteå IF of the Damallsvenskan

Lloyd to be inducted to Rutgers Hall of Fame 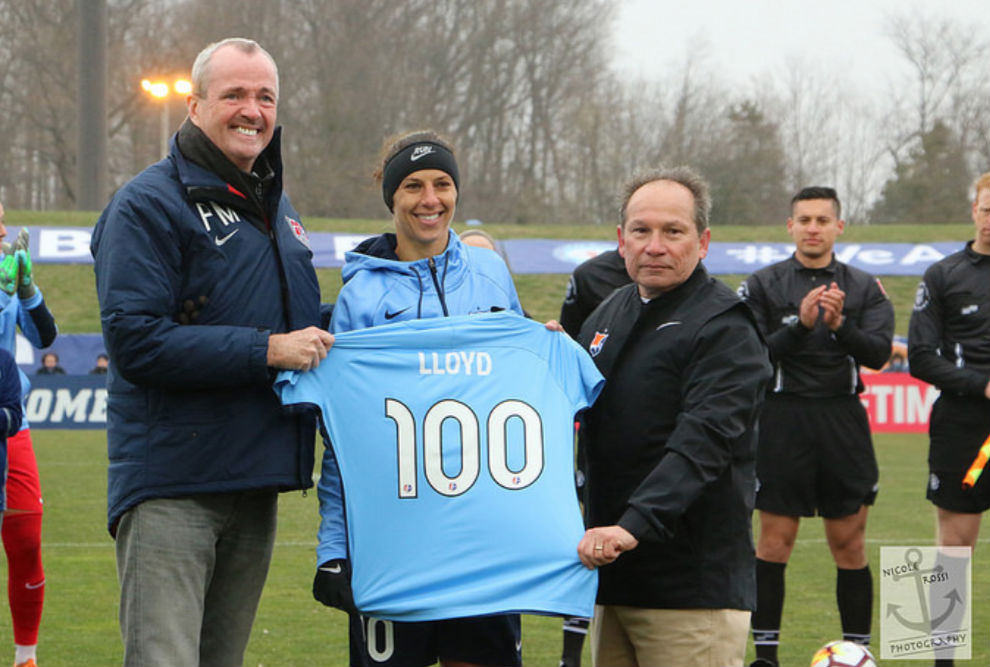 Long overdue, Carli Lloyd will be inducted into Rutgers athletics Hall of Fame with the Class of 2018 (photo copyright Nicole Rossi for The Equalizer)

Birmingham City announced that its women’s club will not be known as Birmingham City Women, replacing Birmingham City Ladies. According to the club, the new name reflects the club’s position as a leading club in the sport and is representative of a modern view on language and equality.

The Blues announced this change ahead of the 50th anniversary of women’s football at the club. Officially, the change will see the removal of all reference to ‘Ladies’ and additionally, wherever possible, the women’s team will be known as ‘Birmingham City’

To coincide with the announcement of Birmingham City Women, the club also announced a women’s charity partnership with Birmingham & Solihull Women’s Aid for the 2018/19 season. This organization supports women and children affecting by all forms of violence.

“This is a pivotal moment in the evolution of our women’s team,” said Xuandong Ren, Birmingham City FC Chief Executive and Director according to the club’s official release. “As a Club we are incredibly proud of the team and their achievements to date. We are fully committed to be a beacon for women’s sport both locally and nationally.”

The new name reflects Blues’ position as a leading club in the sport and is representative of a modern view on language and equality.

The NWSL released it’s injury report ahead of tomorrow’s mid-week NWSL match up between the first-place North Carolina Courage and the fourth place Chicago Red Stars. The Courage, who will be welcoming the Red Stars to Cary, North Carolina have Abby Dahlkemper, Jaelene Hinkle, Sam Mewis, and Katelyn Rowland all listed as questionable.