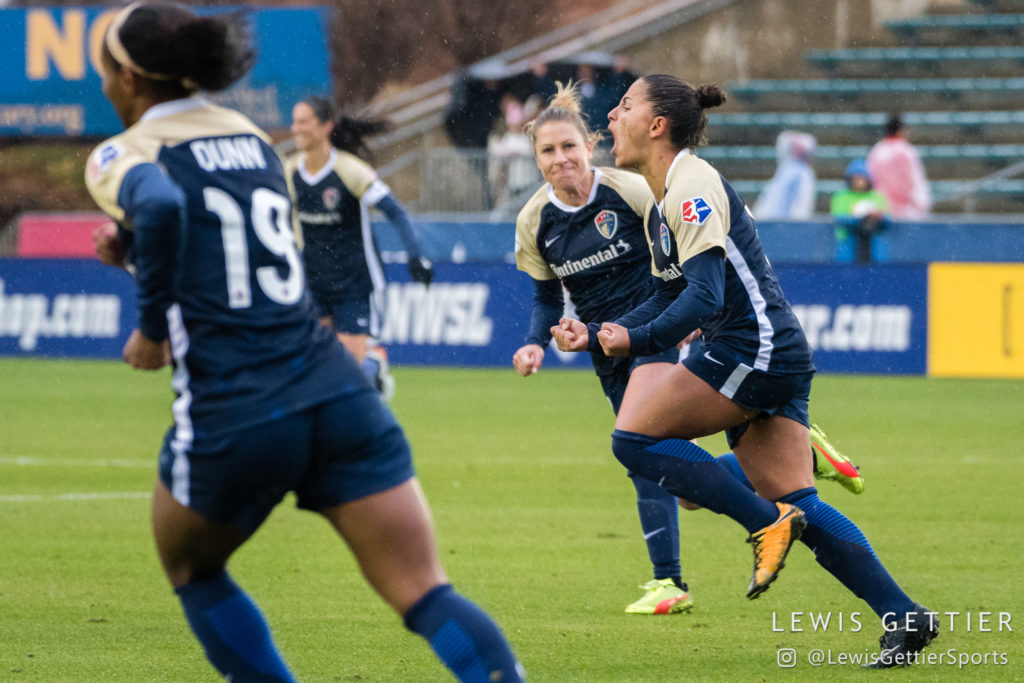 It was all over in three minutes. For the majority of the game up to the 37th minute, and nearly all after the 40th, it was a fairly evenly matched game. But for three minutes the Pride defense fell apart, and North Carolina pounced on them in a way the Courage do best.

Pride head coach Tom Sermanni made a formation change to start the game, asking Sydney Leroux and Rachel Hill to roam the flanks while Alanna Kennedy and Emily Van Egmond handled the midfield. It was a mistake from kickoff, as North Carolina completely dominated the midfield, helped by a very poor match from Van Egmond. Once Dani Weatherholt came in for Hill to start the second half, the Pride did much better although the damage was done.

Orlando almost took the lead in the 22nd minute, when an Orlando corner kick bounced off Jess McDonald into the back of the Courage’s net, but the goal was called back for a foul in the box.  Later, in the 37th minute, Crystal Dunn chipped the ball over Shelina Zadorsky. Monica flicked it to Van Egmond, who let it go for Debinha to grab. The Brazilian turned and let loose, firing a shot that Ashlyn Harris got one hand on, which wasn’t enough to impede its progress.

This was the beginning of the end. Two minutes later Ali Krieger attempted to pass up the field to Hill, but the pass was intercepted by Denise O’Sullivan, who sent it across the top of the box for Debinha. She sent it into the path of Merritt Mathias, who had plenty of space to run onto the ball and launch a rocket past Harris to double the Courage lead.

And then, @merrbear11 scored her third goal of the season to double the lead for @TheNCCourage.#ORLvNC | #NWSL pic.twitter.com/GVSsZLwZn6

With the Pride in complete defensive disarray, the damage wasn’t done yet. Just one minute passed before McDonald snuck in behind Orlando’s backline and got on the end of a Dunn pass, easily notching the Courage’s third of the night.

Spurred by the personnel change which resulted in more possession, Orlando came out strong in the second half. They spent nearly ten minutes in the Courage box around the 55th minute with a number of corners, hitting both the crossbar and the post but were unable to capitalize on the Courage’s inability to fully clear. They limited North Carolina to attempts that were small work for Harris but never could find even a consolation goal on the other end. To make matters worse, Alex Morgan came off in the 80th minute with what was apparently a foot problem despite the Pride being out of subs, meaning they played a player down for the last 11 minutes.

Now with more than twice the points of the seventh place team, North Carolina (11-1-3) retains their firm grip on first place and will host Chicago next Wednesday. Orlando (6-5-4) falls to third place and host Washington next Saturday.

Carli Lloyd scored for the second game in a row, but it wasn’t enough to deny Christen Press’ first goal as a Royal and Katie Stengel’s first NWSL brace.

Royals head coach Laura Harvey made several changes after the midweek match, giving Sam Johnson her first start in Utah in place of Rachel Corsie and putting Stengel and Erika Tymrak up top. The changes worked, as Utah came out firing and were on the board within 8 minutes.

Katrina Gorry sent a through ball into the box, where Gunny Jonsdottir ran into its path and got a touch, but not enough to deflect it. Instead it continued rolling where it found Press at the far post for an easy tap-in.

Utah dominated the first half and it didn’t take long for them to double their lead. In the 25th minute, Press sent a long pass forward for Stengel, slicing through Sky Blue’s backline. Stengel avoided an onrushing Kailen Sheridan with a neat finish.

Just three minutes later, Stengel doubled her tally when she completely shook her mark inside Sky Blue’s box and got her head on the end of a Katrina Gorry free kick.

Sky Blue head coach Denise Reddy made an adjustment at halftime, subbing Savannah McCaskill for Amanda Frisbie while Madison Tiernan dropped to the backline. The switch paid off, helping Sky Blue to grow back into the game. They saw more possession and finally registered their first shot of the match in the 60th minute.

Two minutes after that, Shea Groom ran into Utah’s box, where her shot was blocked by Abby Smith with a kick save. Imani Dorsey recycled the rebound back to Lloyd at the top of the box. The captain launched a shot with her first touch that sailed into the back of the net.

Unfortunately for Lloyd and Sky Blue, her goal would only be a consolation prize. Savannah McCaskill thought she had a second late, but it was called back as the offside flag went up. This was Sky Blue’s 13th consecutive game without a win, tying the all-time NWSL record for a winless streak. At 0-10-3, they remain in last place and will host Chicago next Saturday. Utah (5-3-6) moves up to fourth place and travels to Portland next Friday.

Seattle extended their good form over the Portland Thorns after a late Jodie Taylor goal saw the Reign leapfrog the Orlando Pride into second place in the NWSL table. Taylor’s 89th minute effort from a Megan Rapinoe cross earned her side its sixth win over Portland in the last eleven meetings, and ensured they stay ahead of their rivals, who drop to fifth following Utah’s win over Sky Blue.

The opening ten minutes saw few clear-cut opportunities, with a lot of play in midfield and both teams failing to find that killer pass to carve open either defense.

The first half chance of the game arrived after good work down the right-hand side between Allie Long and Theresa Nielsen saw a cross into the box that was met by Bev Yanez, but her header was straight at keeper, Adrianna Franch. A minute later, England forward Jodie Taylor found some space in area, but her swivel and left-footed shot was just wide of Franch’s right-hand post.

The Reign began to get into their stride, and the always dangerous Megan Rapinoe forced the first real save out of Portland’s Franch, as she cut in from the left-hand side to unleash an effort from 20 yards, that was well saved by the Portland keeper down to her right-hand side.

It took the Thorns almost half an hour to register their first real effort on goal when Brazilian midfielder Andressinha countered with pace following a Reign corner through the middle of the field, before laying off a ball for Meghan Klingenberg, whose floated cross was headed wide by Hayley Raso from close range.

Franch proved why she is seen as one of the best keepers in the league with a superb reaction save to deny Yanez again, keeping out a powerful header after another pinpoint Nielsen cross.

A minute before half-time, the Thorns thought they were taking a lead into half-time when forward Ana Crnogorcevic brilliantly headed past Reign keeper Lydia Williams from a Klingenberg free-kick, but her effort was ruled out for offside.

The Thorns came out flying in the second half and almost broke the deadlock with Lindsey Horan flicked on an Ellie Carpenter long throw to Raso, but her rasping right-foot effort flew over Lydia Williams’ crossbar when she will have expected to hit the target. The next 15 minutes saw few chances created, and it was Elizabeth Addo who registered the most notable effort, as she met a Steph Catley cross with a shot from the corner of the box, but again, it was straight at Franch.

Raso will feel she should have given her side the lead in the 62nd minute when Horan managed to skip past the Reign defense down the right-hand side, before finding a cross for the Australian forward, who headed over the bar from close range when she should have at least hit the target.

There were half chances for both sides that followed, with Megan Rapinoe having the best of them a few minutes from time when her clipped effort from 25 yards was again well saved from Franch. But the killer blow came in the 89th minute when Rapainoe was able to beat Ellie Carpenter down the left-hand side and cross for forward Jodie Taylor, who tapped home from close range for the winner in front of 4,781 fans.

Nothing like a late game stunner. @mPinoe finds @Jodes_14 to give @ReignFC the 1-0 lead!#SEAvPOR | #NWSL pic.twitter.com/C4hvB08Uk5