The Lowdown: Is anyone capable of hanging with the Courage? 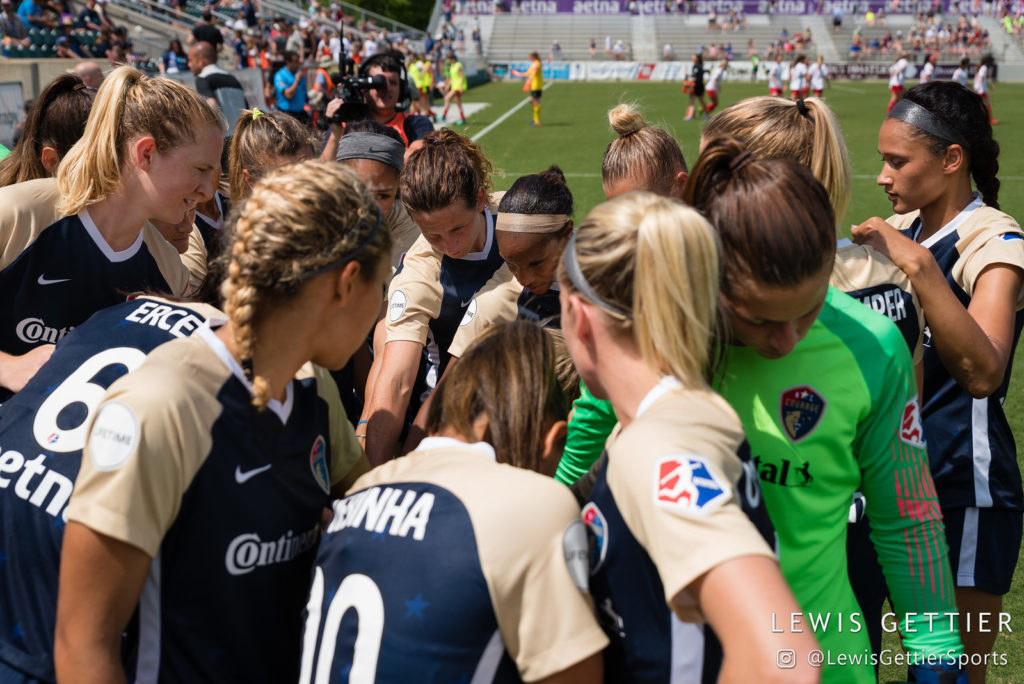 As the North Carolina Courage continue to roll on, a feeling of inevitability has set in about a Shield repeat. Now Heather O’Reilly is on the way, which will only add width to the attack and potency to the bench. With a 24-8-5 mark since the start of 2017 — including 10-1-3 this season — there is little doubt the Courage are the NWSL’s best team at the moment. My colleague Claire Watkins devoted column space to dissecting what tactics their opponents might use to break them down.

At the moment, though, is there another team really capable of hanging with the Courage even under optimal conditions? Even though the Utah Royals clawed their way through 90 minutes without going down a goal and wound up beating the Courage at the death, the current state of the NWSL is such that the pack of chasers are all operating under varying degrees of uncertainty.

At the start of the week, the Orlando Pride looked like the team most like to challenge the Courage. In fact they looked the part for the first hour of Wednesday’s home game against the Houston Dash. They had secured wins over Sky Blue FC and the Washington Spirit with Marta making only cameos off the bench. Against the Dash, Marta started and the Pride were comfortably controlling a 1-0 game when Tom Sermanni subbed out her and, a short while later, Alex Morgan. He paid for it with the result. First, Kealia Ohai scored on what looked like an attempt to cross, and then an Ohai cross was handled by Monica, leading to a game-winning penalty kick. Earlier in the match, Morgan put a penalty off the post — with the keeper going the other way.

“Different thoughts than the last few press conferences I’ve had here,” Sermanni said afterward. “I thought the first 30 minutes tonight were the best we’ve played all season; the best we’ve played for a long time. We were incredibly dominant in the game and probably should have come into halftime in a significant lead and finished the game.”

Few would have argued. The Pride moved the ball quickly and sharply, dominated midfield, were tight defensive when they needed to be and aggressive getting into the Dash penalty area. That they should have been ahead by multiple goals was less a product of poor finishing a la the Courage, and more just that they were so far and away the better side. But 1-0 leads are tenuous, and the Pride paid for not increasing it.

“In soccer, sometimes, one-nil is never safe,” Sermanni continued. “We didn’t get that second goal to finish [Houston] off to then ease the pressure on us and a miss hit cross goes in the top corner and an unfortunate penalty and suddenly the game turns on its head. I can’t really fault the performance except the fact that we didn’t capitalize on the chances that we created and we got punished for being a little bit sloppy a couple of times and lost a couple of goals. It’s just as simple as that. But overall I thought our performance in general was very, very good tonight.”

The loss took a bit of luster off Saturday’s visit from the Courage on Lifetime, but a rebound performance will throw the Pride into the discussion of biggest threat to the leaders just as quickly as the final 20 minutes against the Dash raised doubts.

The Portland Thorns defeated the Courage in the NWSL Championship last October and are sitting north of .500 and in a playoff position, but little about their encore has been encouraging. Wednesday night, they managed a single goal against a Sky Blue team without their defensive anchor Rebekah Stott, and the end of the 1-1 draw saw the winless New Jersey side taking it to the home team. And the one goal the Thorns did get was off a long set piece.

It was hardly business as usual for the Thorns, who had to scratch Tobin Heath just before lineups dropped and later Emily Menges in the minutes leading up to kickoff. Later, coach Mark Parsons subbed Emily Sonnett off after the half, citing rest in her second game back after missing time through a back injury. The back five — including keeper Adrianna Franch and outside backs Meghan Klingenberg and Katherine Reynolds — was back together for exactly one match.

Even though the Thorns kept the sheet clean through the first half, having to scratch Menges exposed their lack of depth through the middle of the park. The Emilys are a daunting center-back pairing when right, but they have had sporadic health and quite a bit of rust this season. With a decided lack of scoring pop up top, and Heath shuttling in and out of match fitness, getting the defense in lock step seems important if the Thorns are going to lift hardware a third season in a row.

The Royals and Chicago Red Stars are still settling into new lineups following a major trade. The Red Stars, with Morgan Brian a late scratch due to that nagging groin injury, played very well in the second half of a win over the Royals. On Wednesday the Royals, in Christen Press’ debut, generated the majority of chances but came away with a scoreless draw. They are each hosting the two worst teams in the league respectively this weekend and neither are in a position to drop too many frivolous points.

The Reign are badly missing the energy of Jessica Fishlock in the middle of the park and won’t have her again for Saturday’s Cascadia Clash against the Thorns. Perhaps Allie Long will revisit their first match in May, which was her best of the season. Or perhaps Jodie Taylor will remember that she once scored double digit goals in an NWSL season and become more of a force around the goal.

And what about the Dash? They could have beat the Thorns but were never really in the match, and they were run over by the Pride but stole a win. Sofia Huerta is not playing her preferred position but has scored in both matches in a Dash uniform. They probably have the smallest margin for error among the chasing teams, and more than any other they need to learn how to win. Another weekend off will give them a chance to help immerse Huerta and Taylor Comeau, and every day further removed from surgery seems to do Ohai a world of good.

But is any team really built to have a chance at overtaking the Courage in the short or long term?

With apologies, the attendance table will return next week.

— Congratulations to McCall Zerboni on becoming the first NWSL player to log 10,000 regular-season minutes. While the milestone is at least partly attributed to her lack of activity with the national team, it is a testament to her durability and dedication. And for those of us who saw two leagues crumble after three seasons, every new statistical landmark is a nice reminder of how far we have come.

— Speaking of minute milestones, Abby Dahlkemper has now missed two straight Courage matches due to knee pain — the first two NWSL matches she has ever sat out due to injury. The only other games Dahlkemper has missed were April 18 due to the WADA warning and June 3 for U.S. national team duty. The April 18 absence snapped her league-record consecutive minute mark at 5,850.

— I have to assume Marta is not 100 percent in terms of health, but clearly she can still leave a mark on a match and, as stated above, the Pride are playing well enough that it seems foolish to push her.

— Does anyone think Jaelene Hinkle has a chance to be in Tournament of Nations camp? I wouldn’t dismiss the idea.

— Every time I watch Crystal Dunn play I find myself saying: “Why doesn’t she play (insert position) every week?” Doesn’t matter what line she’s in. That said, if she is on with Lynn Williams and Jess McDonald, Dunn should be underneath those two always and forever.