Also in today’s roundup, the Courage to be featured in season-long docuseries, Verizon shuts down Go90, and the Dash to face La Liga MX Femenil club in friendly. 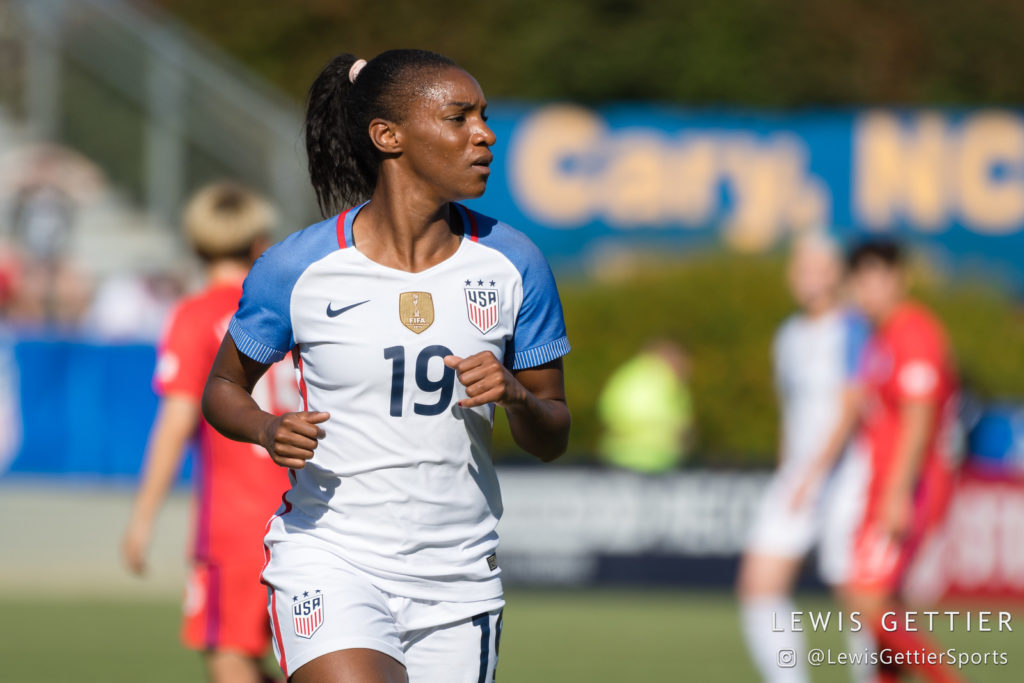 Crystal Dunn is one of two USWNT players to be featured on the covers of the 2018 ESPN Body Issue. (photo copyright Lewis Gettier)

United States women’s national team and NWSL stars Megan Rapinoe and Crystal Dunn are two of just 10 athletes chosen to be featured on the covers of the 10th annual edition of the ESPN Body Issue. Although photographs from the magazine have already been released online, the magazine hits newsstands on Friday, June 29.

Although this is the first time Dunn has been featured, it is Rapinoe’s second time. She was previously featured in the 2014 edition. However, this year she was photographed with her partner, WNBA star Sue Bird of the Seattle Storm, and the pair are the first LGBTQ couple to be featured on the magazine’s cover.

The Body Issue, which was first published in 2009, is meant to highlight the different physiques of athletes at the highest level of their sports. Also included in this year’s issue are Seattle Storm forward Breanna Stewart, LA Galaxy forward Zlatan Ibrahimovic, Olympic figure skater Adam Rippon, and pro softball player Lauren Chamberlain.

Other USWNT stars to be featured in past Body Issues are Hope Solo, Abby Wambach, Ali Krieger, Christen Press, and Julie Ertz.

Courage to be featured in season-long docuseries

The North Carolina Courage will be featured in an eight-part docuseries tentatively scheduled for a 2019 release. (photo copyright Lewis Gettier)

The North Carolina Courage are the subjects of a season-long documentary series being filmed in a joint venture by Verizon, NWSL Media, and Film 45, a non-scripted entertainment production company, as reported by WRAL’s Neil Morris.

The series is being filmed under the working title Goal Line and will be about the Courage’s 2018 season. The plan is for the series to consist of eight 30-minute episodes that will tentatively be released early next year on a broadcast platform yet to be announced.

“We obviously have a partnership with Verizon, since they have the exclusive streaming rights in the U.S. to NWSL games,” said Evan Silverman, executive vice president of digital media for A+E Networks, which oversees NWSL Media. “When [Verizon] told us they had a potential deal to work with Peter Berg [director of Friday Night Lights, Lone Survivor, and Deepwater Horizon] and Film 45, we were extremely excited just given the quality of the production that Film 45 has done in the past.”

The budget for the project is reportedly “north of seven figures” according to producer and Film 45 partner Brandon Carroll.

Multiple sources have reported today that Verizon is shutting down Go90, the free video service that currently streams the majority of NWSL matches. The three-year-old streaming platform will officially cease operations on July 31, more than a month before the NWSL regular season concludes.

However, Go90’s operations have already been combined with Oath, the division that merged AOL and Yahoo. Oath CEO Tim Armstrong reportedly said at the Code Media conference that content procured by Go90 would be distributed across Yahoo and other Verizon properties.

“Under Verizon’s reformulated mobile-video strategy, the tip of the spear is live sports. The telco has exclusive pacts with the NFL and the NBA for games and related content that’s distributed through Yahoo Sports. Verizon now is looking at inking other deals for news and entertainment mobile content,” wrote Variety‘s Todd Spangler.

As for what this means for the domestic fans of the NWSL, matches following Go90’s July 31 end date will be streamed lived on the league website and app, the same place international fans have been watching live games over the past two seasons.

“The NWSL continues to maintain a strong relationship with Verizon and was aware of Verizon’s intention to discontinue the operation of go90,” a spokesperson for the NWSL told The Equalizer. “Games scheduled to appear on go90 in August and September in the US will stream on NWSLsoccer.com and the NWSL app, and we look forward to working with Verizon to reach existing and new fans by streaming NWSL games on other Oath platforms.”

Liga MX Femenil club Las Rayadas will travel to Texas next week, where they will take on two Texas-based clubs as part of their preseason preparations. The second of those friendlies will be against the Houston Dash on Tuesday, July 3 at Houston Sports Park.

Las Rayadas will also take on a FC Dallas team on Sunday, July 1. Following the pair of preseason matches, the Liga MX Femenil side will return to Monterey ahead of their July 22 season opener.

The friendly will not interfere with the Dash’s regular season schedule, as the team has a bye this weekend and will not return to the field until July 7.

Up Close: North Carolina Courage forward Jess McDonald
The Lowdown: Is anyone capable of hanging with the Courage?