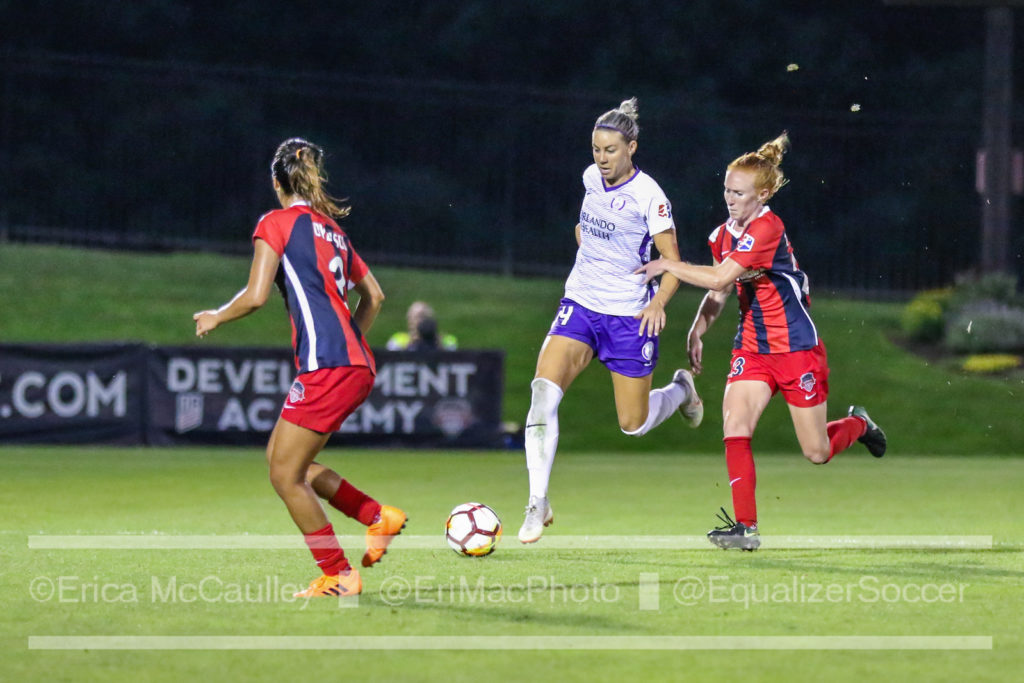 BOYDS, Md. – Everyone has bad days or off moments, no matter your job. For professional athletes, though, those moments are on full display for everyone to see, dissect and discuss. Many people noticed when Orlando Pride midfielder Alanna Kennedy had a first half to forget against Sky Blue FC on June 16.

Perhaps in the worst flub of the half, Kennedy was caught waiting for the ball as Sky Blue striker Imani Dorsey swooped in and raced off towards net, the sequence that ultimately led to a Sky Blue tally. Kennedy would rebound in the second half, finishing the match at the level that fans expect from the Australian international. Nonetheless, she would apologize to her coach for her poor play in that first 45 minutes.

This week, the midfielder had an impressive start to the match against the Washington Spirit highlighted by a potential goal-of-the-season strike in the 11th minute. Kennedy intercepted a ball at the midfield stripe, took a couple of touches and launched a shot over Washington Spirit goalkeeper Aubrey Bledsoe from just inside the Spirit’s half of the field. That strike would stand up as the game-winner.

“Sometimes, it’s not going to come off the way you want but this week I was very determined to sort of do my part for the team,” Kennedy said. “Obviously, I wasn’t happy with how I played last week, but obviously very happy with the goal and I think the most important thing was that we played really well.”

Of course, the half-field rip is a very audacious maneuver, one requiring not only skill, but a certain level of confidence to attempt. Kennedy’s willingness to take the shot showed a commitment to letting the past be the past. For Orlando head coach Tom Sermanni,  the goal also showed Kennedy’s promise as a world-class player.

“It just shows the quality of a player like Alanna,” Sermanni said. “We believe she’s potentially one of the best midfield players in the world. She’s still only [23 years old] and then when you’ve got that kind of vision and technique to do that, it’s rare in the playing field for players to be able to do that.”

On the other side of that game-defining play was the reigning NWSL player of the week, who was well caught off her line. A week after Bledsoe stood on her head to earn Washington a point, the former Orlando goalkeeper now finds herself on the wrong side of an outstanding play.

While it’s obvious that straying outside the 18-yard box is a risk that keepers must weigh carefully, laying the full weight of the goal on Bledsoe’s feet or rather gloves is a considerable oversimplification. Rewind the game tape a few segments from Kennedy’s wonder strike and a consistent sin for the Spirit emerges: an inability to hold possession for longer than an eight clap far too often. The sequence that led to the goal started with a quick turnover at midfield.

“It’s not so much only the midfield, it’s our defenders too,” Spirit head coach Jim Gabarra said about maintaining possession. “I mean, when we win possession in our transition, we have to link up a couple passes and in the first half it was, we were either giving it away on the first ball or we were staying and waiting on some movement – which there wasn’t enough of – and then we’re getting caught in possession and then you’re defending in transition.”

It remains to be seen if Washington can address this glaring issue. The Spirit are next in action at the Chicago Red Stars on Sunday. Orlando will face the Houston Dash at home on Wednesday.

Want access to the best women’s soccer coverage in the United States? Subscribe to The Equalizer Extra for exclusive interviews and analysis, as well as our weekly podcast.

Tuesday roundup: Press set to debut in Utah
Tracking Back: What can be done to stop the North Carolina Courage?