Laura Harvey has long coveted Christen Press. Now she has her. (Photo Copyright Patricia Giobetti for The Equalizer)

Laura Harvey never met a draft pick she wasn’t willing to trade. And so when she took over as coach of the Utah Royals, who slipped into National Women’s Soccer League with assurances of holding the first overall pick in 2019, she knew in the back of her mind it could be an asset capable of helping her team in 2018.

Having long coveted the chance to coach Christen Press is what allowed those two ideas to collide earlier this week when Harvey used that top pick as the centerpiece of a package that landed her Press. And five months after spurning the Dash, Press is indeed on the verge of joining Harvey in the Wasatch Valley.

“Christen Press is somebody that I have watched and admired for a long time and wanted to be part of my team in Seattle and here, and I have worked hard to try to make that happen,” Harvey, who confirmed she did speak directly to Press before making the trade, said earlier this week. “We spoke to Rory (Dames, Red Stars head coach) in the offseason about Sam (Johnson) and it wasn’t quite right with the timing. Once the Christen thing got back on the table we opened up the conversation again to include Sam.”

As the 2017-2018 NWSL offseason began, it was an open secret that Press was likely done with the Red Stars. The Royals — who did not exist until more than a month into the offseason — were not, and then were on Press’ list of desired trade destinations. The framework of a deal that may have happened was mostly in place, but then the Royals used some of the pieces to trade for Kelley O’Hara and Press wound up in Houston. Or didn’t wind up in Houston, since she declined to report to the Dash and instead signed a short-term contract to play in Sweden.

Enter Brooke Elby. The 23rd player selected in the Boston Breakers dispersal draft, Elby has shined for the Royals, particularly in the weeks since Kelley O’Hara went down with a hamstring injury. (Only four players were selected after Elby: Sammy Jo Prudhomme, third string keeper in Houston, Joanna Boyles, a fourth-round pick not currently in NWSL, and two retired players.)

“One of the reasons we really wanted Brooke is because of her versatility,” Dames said on The Equalizer Podcast. “But the best thing about Brooke was that everybody I talked to from her college coaches to Laura to other players to know her was, she’s a great teammate, she’s great in the locker room, and she works her butt off for the team.”

Unprompted, Harvey credited Elby for her performance this season, which she said was instrumental in helping form a deal to finally land Press.

“Credit to Brooke because I don’t think without Brooke’s performances we’d have been able to generate the value that was needed to make it happen,” Harvey said.

Harvey said she did not speak to the Dash during the trade process and only negotiated with the Red Stars, who first had to reacquire Press for Sofia Huerta and Taylor Comeau (a conditional first-round pick in 2020 also went to the Red Stars). Once that was done, Press and Johnson were headed to Utah for Elby, two first-round picks in 2019 — including No. 1 overall — and three conditional picks through 2021.

“I’ve always said if I feel I can use draft picks to make my team better now, I will do it,” Harvey told The Equalizer. “I think most teams have proven who have been successful that if you can invest in them now, short-term and medium-term — say between now and 2019 — I believe what we have done is an investment in our club for then, I believe you can solve for the long-term at a later date.”

Next comes the tricky but exciting process of trying to fit Press into an attack currently spearheaded by Amy Rodriguez. As an champion in both of her full seasons as an NWSL player, Rodriguez has excelled as a lone striker. But Harvey believes that both Rodriguez and Press are versatile enough to make it work. 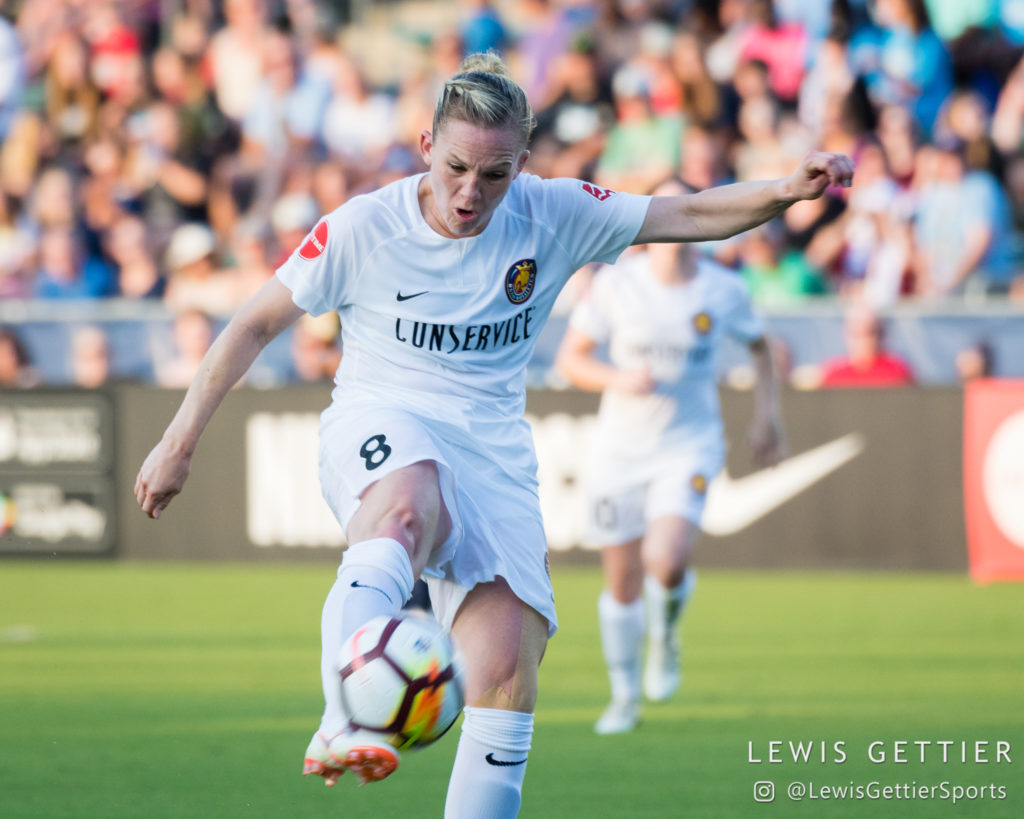 “I think they could work really well together. Both have proven for the national team that they don’t have to be the [No.] 9 to be successful. Christen has shown she can play wide, in the 9, in the 10 – I think it also allows us to have different dynamics with Amy, with Kate Stengel, with Britt Ratcliffe and Elise Thorsnes. We just have a really good balance now across multiple positions.”

One name Harvey did not mention was O’Hara. Still a few weeks out from a return to the field, Harvey hopes that when it happens it is again as an outside back, which she believes is now most beneficial to the Royals as well as O’Hara’s chances of being on the United States qualifying roster this fall.

As for Johnson, she figures to have a tough time cracking the Royals’ centerback pairing of Becky Sauerbrunn and Rachel Corsie, but Harvey feels she has enough versatility to make her way onto the field.

“In all my years in NWSL I’ve always wanted to have a solid four center backs who also can play in multiple positions,” Harvey said. “With Becky, Rachel, Sam and Sidney Miramontez we have that now. They an give us cover at center back, give us cover at outside back, give us cover in the midfield when we need it. I’ve always been a little on edge and probably the Sky Blue game was the biggest eye-opener for me where we didn’t have Becky and if anything happened in the game we were stretched in those positions. I think Sam definitely gives us that cover.”

During preseason, the questions looming over the Royals were how quickly (if at all) Rodriguez could rediscover her scoring boots, and who could serve as complementary scorers. One game shy of the halfway mark and the scoring issues are real. The Royals have scored only 10 goals in 11 matches. But they have surrendered only eight and are two games north of .500. More importantly, when the Royals handed the North Carolina Courage their first loss of the season, it vaulted them into fourth place with games in hand on all four teams within seven points of them.

“I think our back line has been exceptional and our defending as a team has been very good which has allowed us to be in the position that we’re in,” Harvey said. “The disappointment for us is not the record that we have it’s the record that we could have. I feel like the Portland game away was the only one I was really disappointed with. Of all the draws we’ve had, I don’t think there are any draws I’ve been happy with because I thought we should have won pretty much all of them. The reason that we didn’t is that we couldn’t put chances away at times. I think the record that we could have is reflective of the fact we haven’t scored enough goals.”

My quick thoughts on the trade

Here are my quick takes on this trade:

I’m not completely sold that Press is going to fit in seamlessly, but it is a worthwhile gambit for a club that makes very few mistakes in the back and is a few goals short of serious contention. They could also feel the Elby loss in the short term until O’Hara is ready to return. It’s a high-ceiling-low-floor kind of move, and if you’re a fan, it’s a move you have to love when your team makes.

Huerta and Comeau are not exactly players that figure to put the Dash over the top, but they have now added that pair plus Clare Polkinghorne and Allysha Chapman without giving up any players. For a team that has never made the playoffs and is averaging barely three home wins a season, fielding a competitive team is of the essence. They also held firm on Press and didn’t rush her rights out the door, making for a decent ending to what began as a bad dream. If they can unlock the best Huerta has to offer this trade should be remembered fondly.

Dames insists the Red Stars are not punting on the season, and if they’re not and they manage to climb into a playoff position, what a wonder those future draft picks will turn out to be. The key for me is committing to using Julie Ertz on the backline and freeing up Danielle Colaprico to go back to bossing the midfield. Dames is fabulous at gathering assets and then using some of them to acquire picks — as John D Halloran points out, Comeau and Johnson were both undrafted free agents that the Red Stars developed and used in a blockbuster trade. But this has been a ‘now’ team for a few years and there are still no playoff wins.

— It will be interesting to see if the Dash get any sort of attendance bump factoring in the following three things: they have not had a home game in 19 days, are playing much better soccer, and this week brought the Press fiasco to a close while adding Huerta and Comeau. 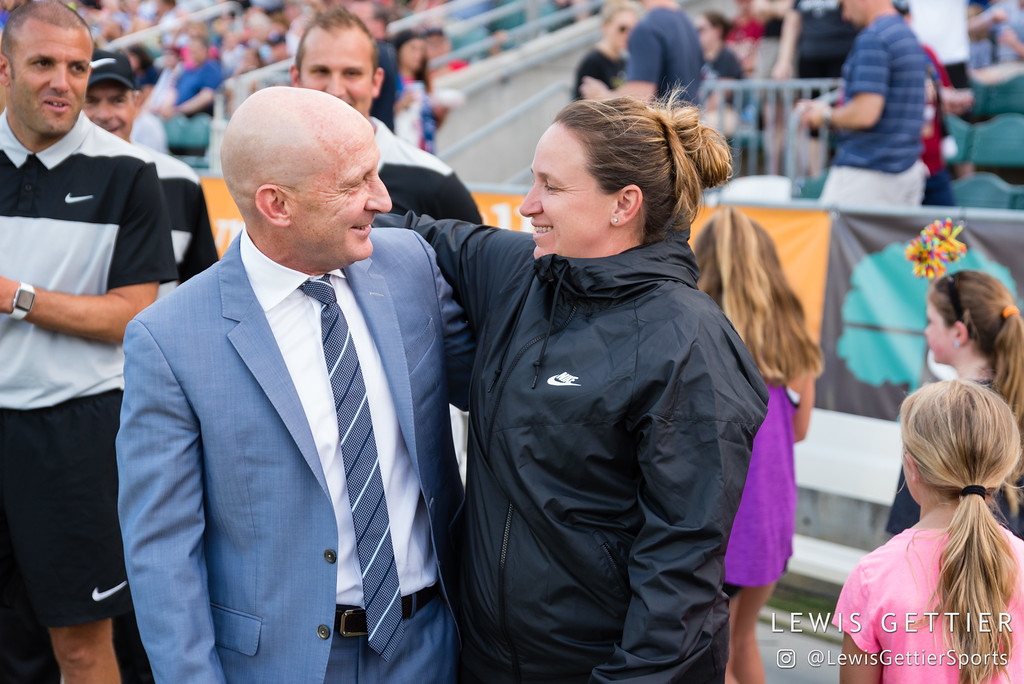 — Asked about Ratcliffe’s goal to beat the Courage, Harvey spoke of how hard the forward has worked this season, never missing a beat even after failing to make the game day roster for a recent trip to Portland. And then she let loose a bit of pleasure in halting the Courage unbeaten streak at 12, four short of the league record set by Harvey’s Seattle Reign four years ago: “I’m not letting them take that unbeaten streak away from me too easy.”

— On Harvey’s less attractive streak of opening the 2013 with 11 straight non-wins, she sees some similarities in this year’s Sky Blue side that has now equaled that record: “I see similar things in their team that I saw in my team in that they’re so close to being very, very good. It’s just going to take that one win and honestly I think their season will turn around. It’s hard to hear when you’re in that position. I definitely didn’t want to hear that when people kept saying that to me. One look, one goal, one clean sheet away from getting a win and I think when they’ll go on a little role to turn their season around.”

— Lindsey Horan is the first player suspended for accumulating five yellow card and her streaks of 41 starts and 2,970 minutes in the regular season will end.

— Christine Sinclair passed Allie Long to become the Thorns all-time leader in minutes last weekend and her next regular season appearance will be her 100th in NWSL.

— McCall Zerboni needs to play 21 minutes for the Courage on Saturday to become the first player to log 10,000 regular season NWSL minutes.

— Because the heart of women’s soccer remains the U.S. national team, there is a unique element to how the fan base is organized. Dames discussed it in the podcast interview when he said that some fans are loyal to teams and some fans are loyal to players. While that is true in all sports, it seems the pendulum is tipped farther to player loyalty in NWSL circles than any other I can think of. That needs to change if NWSL clubs are ever going to gain long-term viability within their markets. This tweet, and a few that follow, from noted Red Stars supporter Maggie Dziubek sum it up well:

People chattering about no longer supporting @chiredstarsPR because of an impending trade…if your support for a team is tied to a particular player, you are not contributing the kind of support women’s soccer needs to survive on a professional level. /1