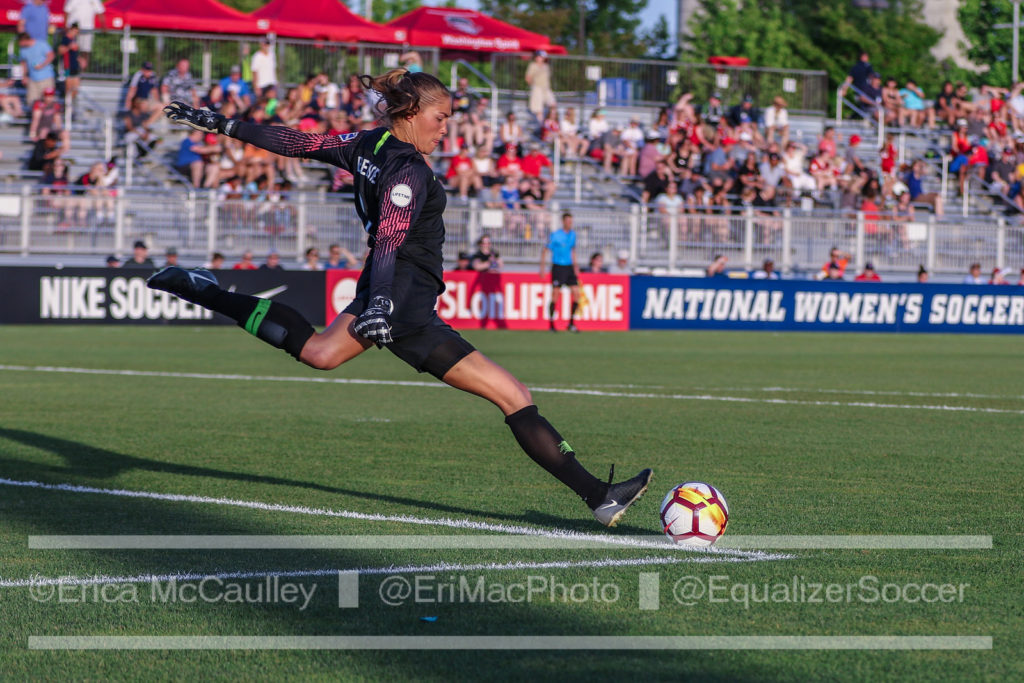 “At the end, I’m happy with the performance and can be with the result because like I said I felt like we created enough chances to score at least one goal,” Seattle Reign head coach Vlatko Andonovski said, staying true to his process-orientated approach to coaching.

The Reign had 17 shots but failed to score in their scoreless draw with the Washington Spirit on Saturday. Seattle undoubtedly would have been well served to put more than six of those on frame but in essence, Spirit goalkeeper Aubrey Bledsoe made the Reign settle for a point. The performance helped earn Bledsoe NWSL Player of the Week honors.

For the second time in as many weeks, Washington played in a game which featured a saved penalty. Unlike the game in New Jersey, however, the Spirit were on the positive side of the denial, with Bledsoe saving Megan Rapinoe’s attempt in the 53rd minute.

In truth, the penalty attempt by Rapinoe wasn’t well struck. Bledsoe was able to thwart the shot aimed at the middle of the goal fairly easily. However, as any soccer fan knows, regardless of the circumstances surrounding a non-converted penalty, it can lead to a momentum swing benefiting the team that committed the penalty-worthy offense.

The penalty set the stage for the rest of the match. The save seemed to reinvigorate the home side as they charged forward converting the contest into a high paced end to end battle.

Washington would end the scoreless contest with 15 shots, most of which came in the second half. As the Spirit gained confidence, the game opened up, in turn, making the Seattle attack more dangerous as well.

The most decisive period of the game came when Bledsoe was called upon the make a series of saves to keep the affair level. In a five-minute time span starting in the 81st minute, the Wake Forest product made three highlight-reel worthy saves beginning with a Jasmyne Spencer left-footed screamer that seemed destined to hit just inside the post.

Arguably, Bledsoe’s best save of that stretch would be the last, however, as she dove quickly to her right to deny a well-placed Rapinoe header.

“Luckily (I) was able to come up with some big-time saves to keep us in it today but that was me kind of feeding off the energy of the team,” Bledsoe said of her performance. “Everyone was out there sacrificing their body with some big-time tackles, Quinn had one towards the end, her knee almost fell off.”

And while much of Bledsoe and the Spirit’s defensive performance is understandably focused on the dramatic saves, it’s also important to mention what didn’t happen in the contest. Despite giving up a handful of free kick attempts in the 20-35 yard range — easily in the Rapinoe’s wheelhouse — Washington came away unscathed. This is in contrast to the 2-1 result in the Reign’s favor back in March, in which the midfielder converted such an opportunity.

The Spirit have now pieced together two gritty defensive performances in a row, holding their opponents scoreless in the process. When asked whether any specifics changes had been made that led to the results, Bledsoe answered the question rather bluntly.

“I think the past few games we’ve had more heart, honestly,” she said. “Sometimes our performances are a little lackluster but these past few games I feel that everyone is fighting for each other. Definitely a lot of blocked shots, people working back putting in the effort to get back and defend.”

Undoubtedly, Bledsoe will need another stellar performance next week for the Spirit to add to their points total for the third straight week against Orlando, the team with the most impressive arsenal of attacking weapons in the league.