The Chicago Red Stars and Portland Thorns played to a 1-1 draw on Saturday night at Toyota Park in a match played under a cloud of speculation about an impending trade involving the Red Stars, Houston Dash, and Utah Royals. The Red Stars announced earlier in the day that Taylor Comeau, Sofia Huerta, and Samantha Johnson were unavailable for the match due to an impending trade.

The ESPNews broadcast—the first of six moved from Lifetime—alluded to the possibility that the trade would lead to Christen Press’s return to NWSL. They also showed Morgan Brian in the stands and indicated that she has spoken to Rory Dames about a role in the team, possibly as early as next week. Brian’s departure from Lyon and subsequent return to NWSL was first reported by The Equalizer’s Kieran Theivam.

When the game started, the Red Stars came out of the box flying but were unable to convert until late in the half. Sam Kerr made an aggressive run to catch up to a ball in the box and when Kelli Hubly left her feet it was an easy penalty call. Yuki Nagasato’s penalty was saved by Britt Eckerstrom but she was able to follow up the play and score on her rebound to give the Red Stars the lead at halftime.

The Thorns wasted little time equalizing after the break. A free kick from beyond the strike zone was won in the air by Lindsey Horan with some help from Ana Crnogorcevic and Horan took a whack at the loose ball and converted.

The match featured the return from injury of three prominent players. Hayley Raso of the Thorns and Casey Short and Vanessa DiBernardo for the Red Stars all came off the bench in the final half hour. DiBernardo nearly returned a hero when she played a ball to put Kerr behind but it was not a perfect angle and Eckerstrom knocked away Kerr’s effort to find the far post.

The draw marked the 13th consecutive meeting between the teams the Red Stars failed to win.

With the draw both teams dropped a spot to the Utah Royals and both are now on the outside looking in at the playoff spots. The Thorns (4-4-4, 16 pts) are at Houston this Friday and will not have the services of Horan who took her fifth yellow card, triggering a one-match suspension. The Red Stars (3-3-7, 16 pts), with a big trade pending, are home to the Royals on Saturday. 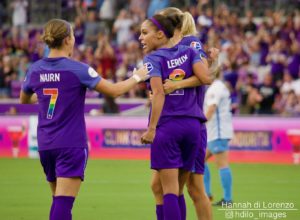 Both teams were swapping goals for much of the match, but the Orlando Pride ultimately had this one in hand from the beginning, getting the full three points and holding Sky Blue FC to a record-tying 11 straight opening games without a win.

Orlando struck early and first, after a cross from Chioma Ubogagu found the unmarked feet of Sydney Leroux, and the striker hit it home from close range in just the 2nd minute of the match. Sky Blue didn’t let the score-line last for long however, and a takeaway in the midfield by Savannah McCaskill was sent out to Imani Dorsey in the 16th minute, which ended in a shot that rebounded right back to McCaskill for the equalizer.

Orlando would pull ahead once again in the 31st minute, in a play that saw Alex Morgan hold up play after a quick run, flick it back to Christine Nairn, who sent the ball in for an expertly placed header from Leroux, who earned a brace and a Pride lead.

Sky Blue wouldn’t let the half end unevenly however, and pulled back once again in the 37th minute. Katie Johnson took a quick shot that was saved by Orlando keeper Ashlyn Harris, but the rebound again slid in Sky Blue’s favor, falling to Madison Tiernan who made it 2-2.

The second half developed slower than the first, but the mach was not without a game-winner, in the form of a fantastic header from Rachel Hill in the 83rd minute, after impressive build-up play from both late-sub Marta and Alex Morgan.

Orlando would ultimately take all three points from the night, and Sky Blue was again looking for answers.

No one saw it coming, but a goal late in stoppage time handed North Carolina their first loss of the season.

The game spent the first 93 minutes mostly battling it out in the midfield. While plenty of players from each side played during the international break, the starting lineups didn’t vary too much from the norm, with only Denise O’Sullivan taking a rest for North Carolina. However, the effect of the break was felt, as both teams struggled to combine regularly and find rhythm. As befits both sides, North Carolina saw the lion’s share of possession and had the majority of the shots, but Utah continually denied them with strong defending.

Although a few balls flashed wide, North Carolina came closest to scoring first in the 32nd minute, when Abby Smith made a huge save on Crystal Dunn, and again in the 64th minute, when Dunn juked to create space and pinged the ball off the crossbar.

When Utah did get the ball up top, Amy Rodriguez looked to be comfortable playing off Katie Stengel, but the pair didn’t see the ball often enough, and Rodriguez never really threatened Katelyn Rowland.

As the game wound down, both sides looked tired and ready to settle for the draw. However, out of nowhere, the Royals changed their mind. In the 94th minute, Elise Thorsnes was fouled on the left flank, well outside the box. Diana Matheson lofted a ball to the top of the penalty area, where it fell to no one initially. Brittany Ratcliffe collected the ball with a sliding tackle, pivoted, and chipped it past Rowland with a deceptive flick.

.@brit_ratcliffe is out here, scoring goals in stoppage time and ending streaks. This is one GIANT goal for @UtahRoyalsFC. #NCvUTA | #NWSL pic.twitter.com/uNOoYPsTDy

This was Ratcliffe’s second goal of the year, both against North Carolina. Last time they met she helped secure a point for the Royals, but this time she took all three.

Despite the loss, the Courage (9-1-3) will remain in first place regardless of the outcome of this weekend’s games, and they travel to Seattle next Saturday. The Royals (4-2-5) will jump into fourth place, pending the results of the last match of the night, and travel to Chicago next weekend.

Eight days after having a penalty kick saved in a 0-0 draw, Washington Spirit goalkeeper Aubrey Bledsoe turned the tables by stopping Megan Rapinoe’s PK in a second straight scoreless draw, this time to the Seattle Reign. The Reign won the penalty on a promising attack early in the second half but Rapinoe barely made Bledsoe work for it, smacking the penalty low and barely to the keeper’s left allowing for a clean save.

The Reign welcomed Megan Oyster and Steph Catley back to their defense after each missed time through injury. But they were without midfielder Jess Fishlock who traveled to Washington but was not deemed fit enough for the 18-woman roster. On the other side the Spirit gave Rose Lavelle her first start of the season. She played the first half and it was her dynamic run through the midfield that led to an Estefania Banini shot that trickled just wide of the far post.

The Spirit (2-7-4, 10 pts) made it two straight games without a loss for only the second time this season, but also failed to score for the third straight contest. They’ll be back at home next Saturday to host the Orlando Pride on ESPNews. The Reign (5-2-4, 19 pts) host the North Carolina Courage on Saturday at Memorial Stadium.
—Dan Lauletta