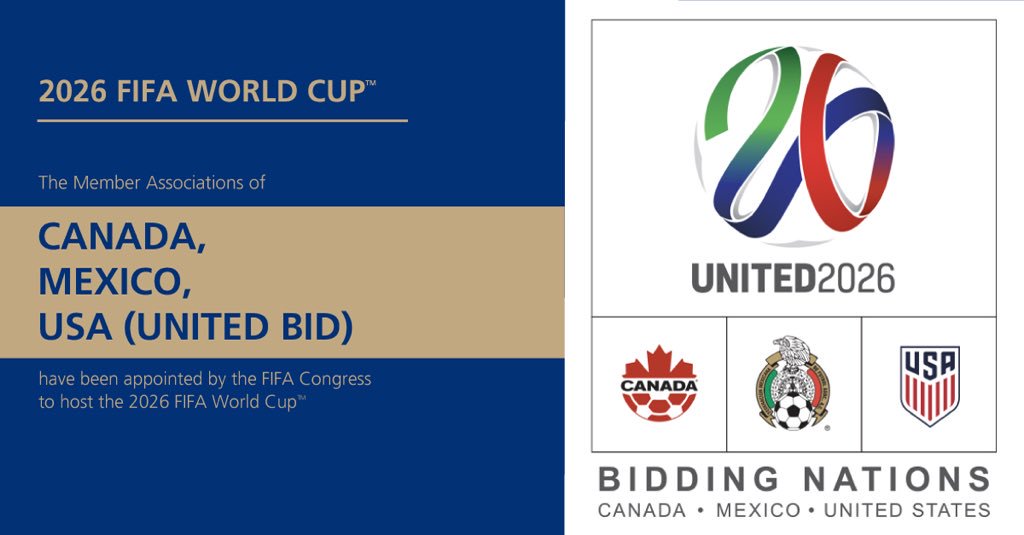 A joint bid by the United States, Canada, and Mexico won the bid to host the 2026 World Cup. The “United” bid easily defeated Morocco in a vote at the FIFA Congress in Russia ahead of Thursday’s opener to the 2018 event. The Men’s World Cup was last in North America when the United States hosted in 1994. Mexico hosted in 1970 and again in 1986, while Canada has never hosted the men.

Karina LeBlanc, who played for the Canadian women’s team at the last Women’s World Cup three years ago in Canada, was instrumental in helping to secure the bid and was on site for the vote.

Breaking news for those just waking up.
CANADA/USA/MEXICO WILL HOST 2026 WORLD CUP.
Let me just say the energy in the room went tense to jubilation!#United2026 @CanadaSoccerEN @ussoccer @miseleccionmxEN @Concacaf pic.twitter.com/6acRJfoQmQ

The United States is expected to host 60 of the 80 matches at the tournament which will be the first to feature 48 teams. Canada and Mexico will each have 10.

Landing the Men’s World Cup could put a crimp in U.S. Soccer’s attempts to bring the Women’s World Cup back to the states in 2027. World Cups have been awarded to the same confederation in consecutive years twice before including this year’s men’s event in Russia and next year’s women’s tournament in France (the other time never happened when the SARS breakout forced the 2003 Women’s World Cup to be relocated from China to the United States) but never in the same country.