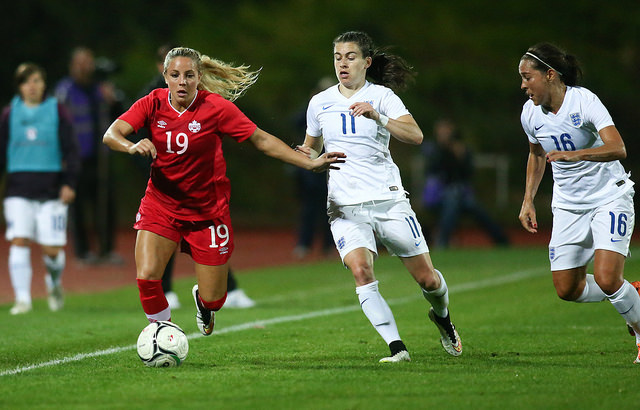 For the NJ side this year, Leon has only played in two matches, logging 33 minutes. Leon ended up at Sky Blue for the 2018 season after the Boston Breakers folded ahead of the season start. Leon started her NWSL career with the Breakers in 2013 before being traded to the Red Stars. In Chicago, she played 35 matches in two seasons. From there, she went to the Western New York Flash before re-joining the Breakers for the 2017 season. Last year in Boston, she scored six goals in 24 matches with the club.

Reign head coach Vlatko Andonovski is excited about what he believes Leon will be able to bring to the front line of his squad that currently sits in second place on the NWSL table. “We’re thrilled to add Adriana to the team,” Andonovski said. “She’s a strong player with a lot of experience in this league and with her national team. She’ll add another piece to our attack and make us a better team heading down the stretch. I can’t wait for her to join us.”

Leon will not count as against Seattle’s roster limit.

In Group 1 action, Wales defeated Russia by a score of 3-0 to move to the top of their group after Tuesday’s match. With this result, Wales is guaranteed at least second place, which is a position they’ve never before been in. They will take on England next on August 31 at home.

In Group 2, Scotland came from 2-0 behind Poland to win 3-2 after some late game heroics. Three goals were scored in 11 minutes thanks to Kim Little, Jane Ross, and Lisa Evans who put in the last minute winner. Utah Royals defender won her 100th cap for Scotland.

WATCH | @LisaEvans_17 completes the comeback on 90 minutes to seal a 3-2 win for Scotland. #SWNT #OurGirlsOurGame
pic.twitter.com/kmw0yOBWd8

The group stage continues at the end of August starting on August 30. Full results from today’s matches below.

AC Milan acquired ACF Brescia, will compete in Serie A femminile next season

Yesterday, AC Milan announced that they had acquired women’s club ACF Brescia who will serve as their women’s club in the next Serie A Femminile season.  Last season, Brecia finished out the year level on points with Juventus, but ended up finishing the league as runner up after falling to Juventus in the playoff. The club will appear in next season’s UEFA Champions League.