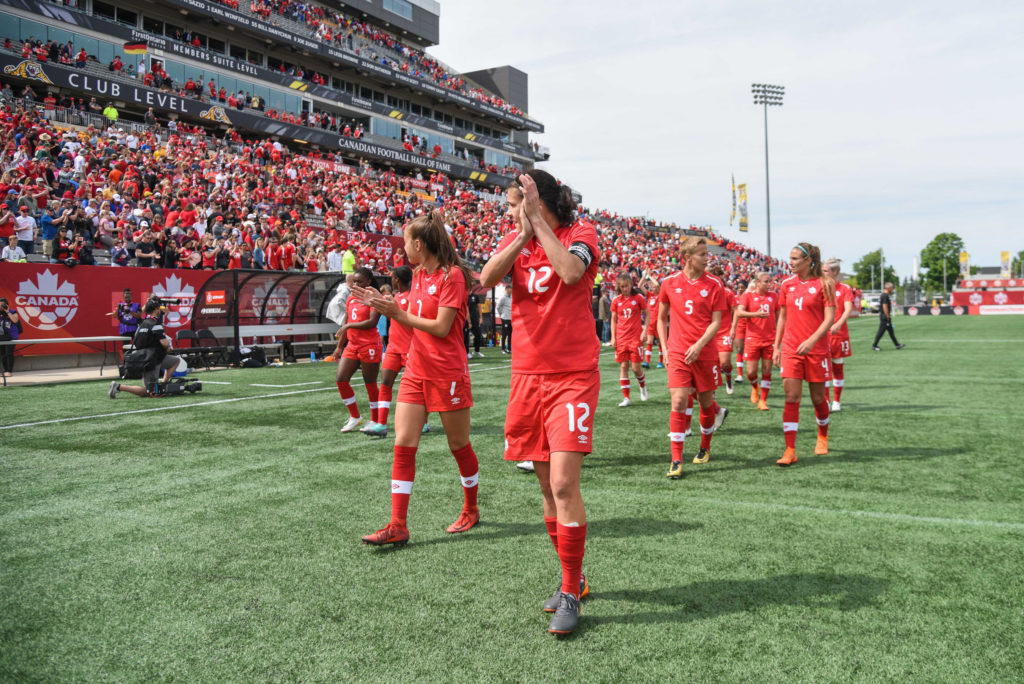 HAMILTON, Ontario – Germany came from behind to earn a 3-2 victory over Canada on Sunday in front of 22,826 fans at Tim Hortons Field, spoiling the home debut of Canada coach Kenneth Heiner-Moller.

“I’m very proud of the team that stepped onto the pitch for Canada.” Heiner-Moller told reporters postgame. “We’ve definitely worked hard the last four days, with full sessions, to try to create a new structure.”

“The middle third of this match is one of the best thirds while I’ve been the coach that we’ve played. Congratulations to Germany, I think we definitely took some good steps in this match playing a different style of play.”

Heiner-Moller had been John Herdman’s assistant since 2016. He took over the head-coaching role in January upon John Herdman’s surprising switch to Canada’s men’s national team coach, after six years in charge of the women’s side. Sunday was Heiner-Moller’s sixth match in charge, but his first on Canadian soil.

While Heiner-Møller was relatively pleased with his fourth-ranked team’s showing against world No. 3 Germany, his captain, Christine Sinclair, was clearly frustrated with Canada’s momentary lapse which allowed Sara Dabritz to tie the match 2-2, just after Fleming had scored.

“Obviously, very disappointed that we lost,” Sinclair said. “Very disappointed with the way that we started the game. To go up 2-1 and then to have them score in 15 seconds, it’s kind of deflating. I think this is one of those games — we’ll be able to look back. We put forth a positive performance that we can build on in World Cup qualifying.”

Svenja Huth scored 51 seconds into the match to give Germany the lead. Sinclair wouldn’t equalize until the 59th minute, scoring her 173 international goal to put her 11 goals behind world all-time international scorer Abby Wambach. Fleming gave Canada a 2-1 lead 10 minutes later, but Dabritz struck immediately, and Turid Knaak struck for the winner in the 84th minute.

Experimenting with a new formation, Heiner-Moller started with a 3-5-2 formation. Germany seized on Canada’s unfamiliarity with three-back. Germany’s Svenja Huth nicked the ball off Kadeisha Buchanan, broke out down the flank, and fired the ball past goalkeeper Stephanie Labbe.

“This team has worked for the last four or five years to become the most adaptable team in the world.” Heiner-Moller said of his formation. “This takes it even a step further. We can make in-game changes, but also keep between-game changes. We got a lot of work for our fullbacks in the normal structure. If you go into a tournament, you need to have them resting at periods. It’s also about how can we put pressure on the opposition. I think we have so much quality up front, so we can hurt opponents in different ways. For me with this team, it’s always about exploring how we can improve, instead of doing, what we’ve always done.”

Canada and Germany put on a second half show with plenty of creativity and goals. The structure that both teams want heading into qualifiers is still a work in progress. That’s of course to be expected as both sides learn to adapt with new managers in charge. Germany is playing under interim boss Horst Hrubesch after the dismissal of Steffi Jones.

Would Danish-born Heiner-Moller have been happy with a tie?

“I think if we take away all their three goals, we’d be very happy,” he said, to a roar of laughter. “I think as a coach, sometimes you need to look through the result, and look at the performance. I’m very happy about the performance. We had some little bumps on the way, but after 30 seconds, we put on a totally different structure. If you talk about our resiliency, I think this team showed it. We need to finish the job, it’s 80 percent great start, and then the last 20 (percent), we’ll work on it.”