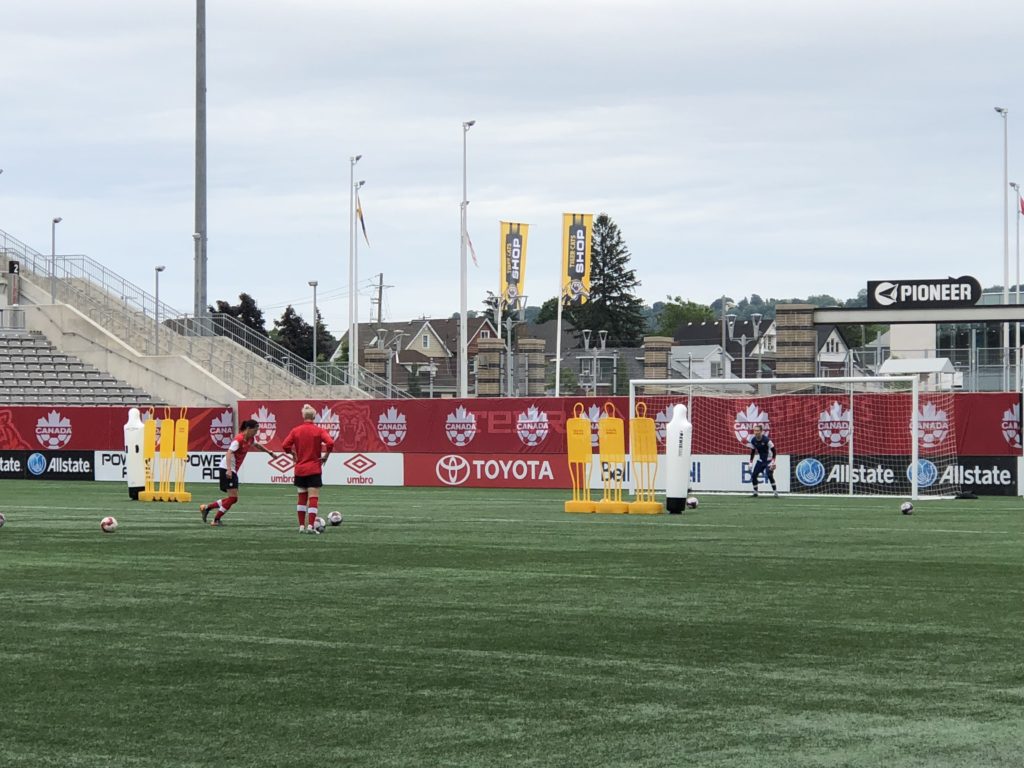 HAMILTON, Ontario – Canada Soccer is back in action, at home for the first time this year, as they prepare to take on Germany on Sunday afternoon at Tim Hortons Field. There will be a noticeable difference on the Canadian sideline as Kenneth Heiner-Møller will manage his first home match since replacing John Herdman on January 8, 2018.

Anytime there is a coaching change, it can take time for players to adjust to new tactics, philosophy, formation, and an overall sense that a team is going in a new direction. Heiner-Møller has more familiarity, because he was previously an assistant coach with Canada. That’s allowed for an easier transition from Herdman to Heiner-Møller.

“He’s been in the group two years now.” Diana Matheson said following training on Saturday. “I think he’s already had an impact on the team that Canadians would have seen in the way we played in the last two years. I think it’ll be just more of that. He’s all about possession, and taking us even further in that regard.”

A lot of what Herdman implemented with Canada is still there. You’ll see the same names, and of course more of the next up and coming generation. Herdman put the building blocks in place, and now, Heiner-Møller is adding his style which will no doubt compliment and work with what Canada has developed under Herdman’s learnings.

“Yeah, I think he is a little bit quieter,” Rebecca Quinn said of her new coach. “I think that’s his persona. I don’t think that takes away in any sense. He understands opportunities where he needs to bring that big personality, and big presence. He knows when to push us in a louder volume. At times it’s nice to have that level-headed sound mentality that he brings to our team.”

The 47-year-old, Heiner-Møller has brought more flexibility in terms of freedom on the pitch. It’s not so much, go out there, have fun, and play without structure, but more so room for creativity, and the chance to try a new approach, while still having the focus, skill, and determination to not step outside the box too far.

“I think it’s just his understanding of the game, it’s for sure at the level that John was.” Quinn said as she described Heiner-Møller. “I think he’s just building on what John put into our system. He’s pushing to that next level of soccer knowledge that we all know. He’s pushing us towards playing our best style soccer, and getting that creativity out of us as well. He’s letting us take the reins off a little bit, and pushing us for that creativity, which I think is huge for our team.”

Matheson could not contain her excitement as the nearby native of Oakville, Ontario native will have a large contingent of family, friends, and cousins scattered around, what is expected to be a sold out crowd of 22,000 spectators.

“I’m looking forward to the game.” Matheson said, as she snacked on healthy, post-training gummy bears. “Whenever you play one of the top teams in the world, it’s a great test for us. When we get to go at home, in front of a sold out crowd, it’s even more special. Plus it’s in the GTA (Greater Toronto Area), so I’m obviously excited.”

Third ranked Germany are in a bit of a flux as they look to form a new identity post Silvia Neid, and most recently, Steffi Jones. Horst Hrubesch will manage Germany until the end of 2019 World Cup qualifying. Former Germany international, and Switzerland Coach, Martina Voss-Tecklenburg will take over at the end of October.

While Germany might be sputtering at the moment, since 2011 they hold a 5-1-0 record against Canada. They most recently defeated Canada 2-1 on April 29 in Erfurt, Germany. Sky Blue FC forward Adriana Leon knows that Germany aren’t to be taken lightly despite a youth-laden roster with a caretaker manager at the helm.

“We know they’re bringing in a lot of new younger players,” Leon said. “But with Germany it doesn’t really matter. We know they’re going to be a strong team, doesn’t matter the age or experience.”

“Don’t lose your grip on the dreams of the past, you must fight just to keep them alive.” ? #CANvGER #Matchdayminus1 #CanadaRed ?? pic.twitter.com/EzmGRg7sSh

It’s an important friendly for Leon, who has dramatically seen her playing time cut short this season with Sky Blue FC. Getting back on the pitch in-game action with Canada allows her a chance to earn some minutes, while taking a pause on a quiet NWSL season.

Canada and Germany both have new coaches that are trying to put their own stamp on the team. Kenneth Heiner-Møller has much more room with Canada, than Horst Hrubesch does with Germany. It’s going to be a test for both sides as they look to find some momentum with 2019 World Cup Qualifying continuing for both teams in October.