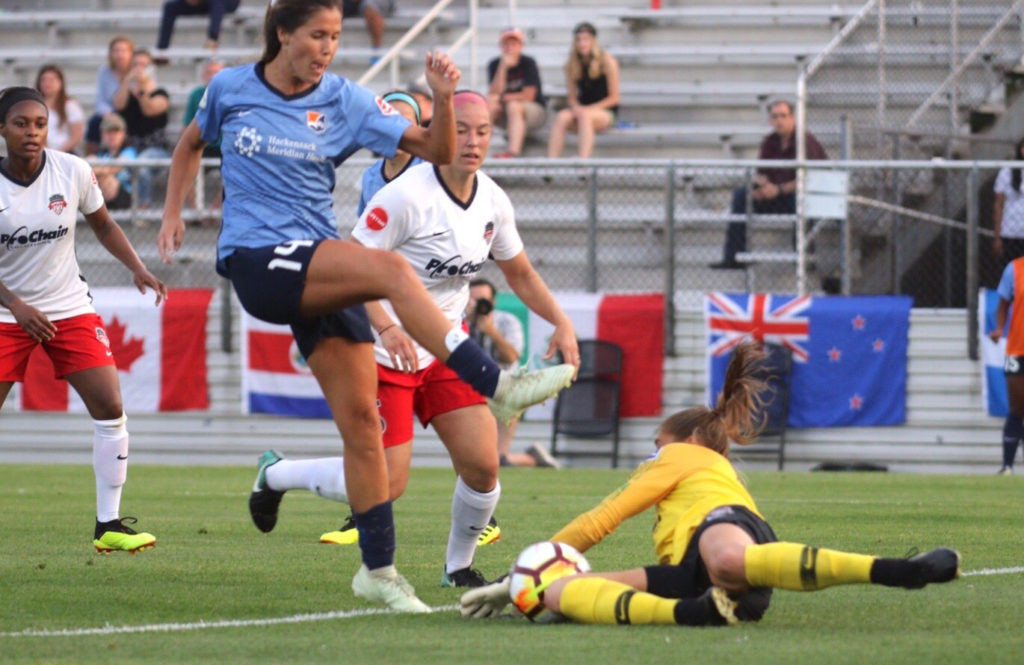 Kailen Sheridan saved Andi Sullivan’s 79th minute penalty to preserve a 0-0 draw, but the result leaves Sky Blue within one match of tying the league record for most matches without a victory to open an NWSL season. The penalty was the product of a Madison Tiernan foul against Estefania Banini. Sky Blue players huddled in frustration, and then Sheridan made Sullivan wait a few extra moments. The penalty went to the keeper’s left and Sheridan dove to knock it away for a corner kick. Sheridan’s teammates then formed another huddle around her, this one a celebratory one.

Penalty aside, Sky Blue were on the front foot much of the evening. Shea Groom had numerous forays deep into the Spirit penalty area but was unable to break through. At times Groom was hesitant to shoot including a sequence at the end of the first half when she elected to play the ball higher and centrally. The play ended with Spirit keeper Aubrey Bledsoe making her best save of the game against Katie Johnson.

Banini earns the @WashSpirit the PK, but Sheridan steps up for the save on Sullivan. Still all even in Jersey with less than 10 to go.#NJvWAS | #NWSL pic.twitter.com/knnIgc6AGF

The match was the only fixture of the week while the rest of the teams observed the FIFA window. As a result both were without several key players. Sky Blue gave No. 5 overall pick Imani Dorsey a start on her NWSL debut and also featured Michaela Abam who had been used sparingly to this point.

Sky Blue (0-8-2, 2 pts) snapped their club record six-match losing streak but became the first team in NWSL to have two different streaks of 10 games without a win. They are in Orlando on Saturday, June 16 and need a win to avoid matching the 2013 Reign (0-9-2) for the longest stretch without a win to open a season. The Spirit (2-7-3, 9 pts) reach the midway point in their season in 8th place. They are six points and four places out of a playoff spot. They host the Reign on June 16 at the Maryland SoccerPlex.