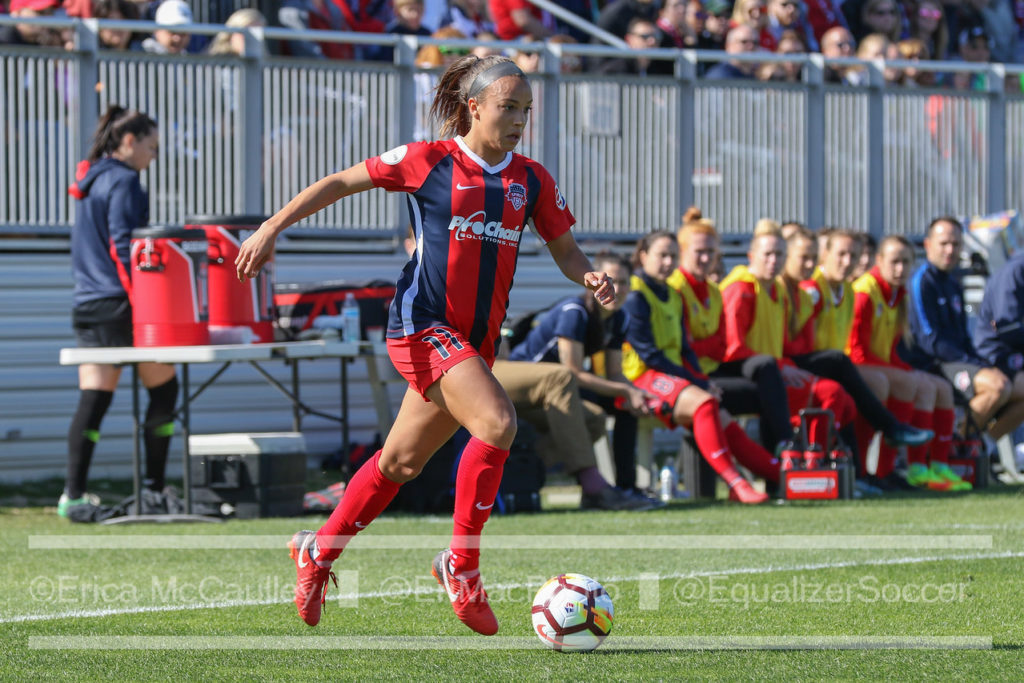 Mallory Pugh will miss 8-10 weeks with a PCL sprain. (photo copyright EriMac Photography for The Equalizer)

U.S. Soccer announced on Friday that forward Mallory Pugh would be out the next 8-10 weeks after suffering a posterior cruciate ligament (PCL) sprain.

Pugh sustained the knee injury in the second half of the Washington Spirit’s May 27 road match against the Houston Dash. She has been unavailable for the Spirit since, and she was left off of the U.S. women’s national team (USWNT) roster for their June camp and friendlies, currently ongoing.

“This isn’t the greatest time to get an injury like this, but with the support of medical staffs from U.S. Soccer and the Spirit, as well as from my teammates and the fans, I’ll be back on the field as soon as possible,” Pugh said in U.S. Soccer’s official statement. “Now my job is to rehab, and I’m going to be really focused on that process.”

The timing of Pugh’s recovery means that, if all goes to plan, she could return to the field for the Spirit in August, shortly before the conclusion of the current NWSL season.

That would not only be beneficial for the Spirit, currently sitting in eighth place in the league, but also for the USWNT, who has their World Cup qualifying tournament, the Concacaf Women’s Championship, kicking off at the start of October. Pugh has scored five goals in six appearances for the USWNT in 2018, just one goal shy of team leader Alex Morgan.

Camila has been removed from the 45-day disabled list and will be available for the Orlando Pride on June 16. (photo courtesy Orlando Pride)

In other NWSL injury news, the Orlando Pride announced on Friday that Brazilian-international defender Camila has been removed from the 45-day disabled list and added to their active roster. Camila, who suffered an ACL tear and MCL sprain in her right last September, will be available for selection for their June 16 match against Sky Blue FC.

With Camila on the disabled list, the Pride were already at max capacity in regards to international spots. However, the Pride also announced that defender Monica has obtained her green card, making her a domestic player and freeing up the club’s sixth and final international spot for Camila.

Welcome to the club, @CaseyStoney! #MUFC

Manchester United announced on Friday that Casey Stoney has been named the first ever head coach of their women’s team ahead of their inaugural 2018/2019 FA Women’s Championship season.

“I am delighted to have joined Manchester United,” Casey said in the team’s official statement. “This is the biggest club in the world. The fact that we are going to have a women’s team and I’m going to be able to introduce that from scratch, to build a team, build a philosophy, with the biggest club in the world, means that, for me, there is no more exciting opportunity.”

Stoney, 36, announced her retirement from playing earlier this year and, after obtaining her coaching license, briefly served as an assistant coach for England’s national team. The former captain and defender made 130 appearances for the Lionesses and won 12 major trophies over the course of her professional career.

“My ultimate aim is to grow this team so that every little girl growing up dreams of playing for Manchester United when she’s older because they’re the most successful team in women’s football,” she added.

Finland 0-2 Austria: Finland sealed their own fate, scoring the game-winning own goal in just the sixth minute. Midfielder Katharina Schiechti added a second goal for Austria in the 72nd minute to secure the win for the visitors.

Russia 1-3 England: The Houston Dash’s Rachel Daly got the start in England’s 3-1 win over Russia, but at left back for Phil Neville’s Lioness squad. That prevented her from getting on on the scoring action, but Nikita Parris opened up scoring for England in the 22nd minute and was followed by a first-half brace by Jill Scott to round out to hand England the convincing win. Scott’s double sandwiched the lone Russian goal of the match, scored in the 31st minute by Elena Danilova.

Ukraine 1-5 Denmark: Former Portland Thorn Nadia Nadim and Sanne Troelsgaard both finished the day with braces in Denmark’s 5-1 win over the Ukraine. Nadim opened up scoring in the sixth minute, but it would be Pernille Harder’s goal in the 32nd minute that would be the game-winning tally after Denmark allowed a Ukrainian goal to get one back in stoppage time.

Ireland 0-2 Norway: Lisa-Marie Utland scored a double to hand the visiting Norwegian national team the win over the Republic of Ireland on Friday. The North Carolina Courage’s Denise O’Sullivan played the full 90 minutes for Ireland.

Italy 3-0 Portugal: Italy’s Cristiana Girelli scored the go-ahead goal in the fourth minute of the contest, while defender Cecilia Salvai (13’) and Barbara Bonansea (90’+1) also getting in on the scoring action for the hosts.