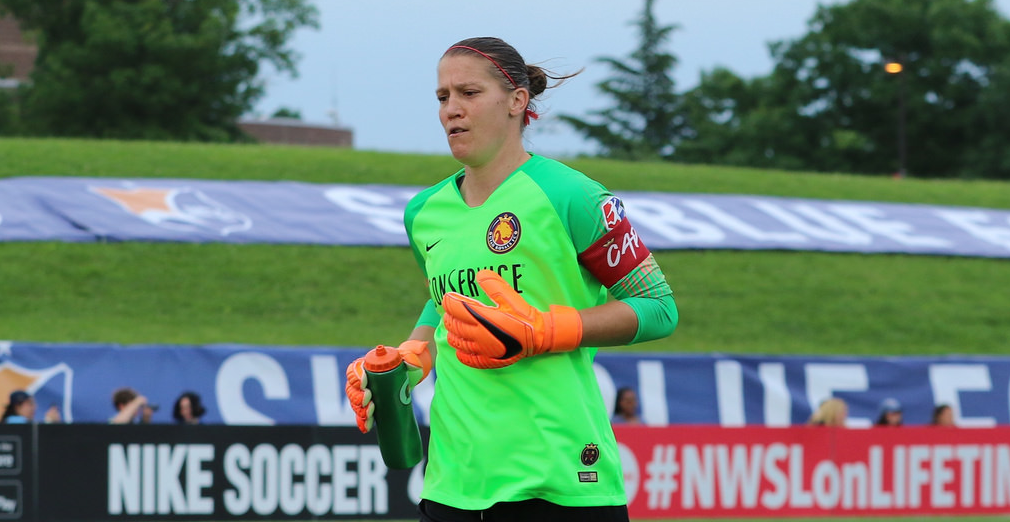 It was last Friday and the Utah Royals, on the franchise’s first trip to New Jersey, were preparing to face Sky Blue FC the following evening. The team was training at Rutgers, but no team—including Sky Blue—trains on the pitch at Yurcak Field. That one is reserved for game days. But Royals coach Laura Harvey wanted her Icelandic midfielder Gunny Jonsdottir to know what she was in for on game day.

“It’s just a huge field,” Harvey said. “I brought Gunny out here to look and the field and said, ‘you haven’t played on anything as big as this yet.’ We spoke prior to the game that on this field when the game gets stretched I don’t think you can have the same midfield for 90 minutes.”

No one can measure how much Harvey’s sneak peek helped Jonsdottir in the match on Saturday, but she did play the full 90 minutes, worked as hard as anyone on the field, and was instrumental in both Royals goals.

“When you come here you know you’ve got to work hard with and without the ball,” Harvey said.

PODCAST: Richard and Claire on Jaelene Hinkle plus Week 10 in NWSL and the USWNT roster

The 2-1 win on the massive pitch at Yurcak Field—Jonsdottir sent in the ball for an assist to Diana Matheson, and she beat her defender to get off a cross that led to the own goal that won the match—brought the Royals over .500 for the season. A glut of draws means that despite having won more than they have lost, the Royals are only in sixth place out of nine. Then again they are only one point out of a playoff spot and two out of third.

“I think every game is different and obviously we’re still trying to find the best spots for some people,” Taylor Lytle said after making her first start of the season in her first appearance at Yurcak as a visiting player. “This year the league is a little different because the rosters are so huge that I think every team might be struggling with the exact same thing.”

NWSL also experienced roster makeovers all over the league, but in Utah it was something of a hybrid. The franchise was officially formed as a new side, but less than a week later all contracts, draft choices, international slots, and other player rights from the folded FC Kansas City were transferred to Utah. That meant Becky Sauerbrunn, Amy Rodriguez, and Desiree Scott among others that formed the core of FCKC went to Utah. From there Harvey put her imprint on the group by adding players like Jonsdottir and Elise Thorsnes on the discovery market and Kelley O’Hara via trade.

“Honestly, it feels like a new team,” Lytle, who was part of the O’Hara trade, said. “There are so many different faces that came in, especially internationals. Obviously there was a bond there, you could tell, but the Kansas City girls were really good at opening up to everyone and we really meshed well in preseason.

If it took the Royals some time to get going it was less because they were a new team and more because Rodriguez opened the season still in the final stages of ACL rehab. Throw in her 2016 pregnancy and A-Rod essentially missed two and a half years. Secondary scoring has been tough to come by as Saturday’s win was only the third time the Royals have scored more than once against four times being blanked.

But it looks like the midfield that will need to pick up its game if the Royals are going to climb to the other side of the playoff line. Jonsdottir and Scott have done their parts to keep opponents at bay, but the attacking element of the midfield has lacked. Saturday’s game-winner came against the run of play near the end of an evening during which Sky Blue’s midfield whipped the Royals’ through most of the second half.

“We lost our way a little bit in the second half so we had to go long a lot which gave them a but of momentum,” Harvey said. “I honestly felt like this was a game that I was concerned about. I think Sky Blue have been improving every week and obviously both teams (were) missing a few players.”

The few players missing were mostly the result of the United States calling in players for camp on Friday rather than allowing them to play out the NWSL weekend. For the Royals that meant no Rodriguez up top, no Sauerbrunn anchoring the defense, and no Abby Smith in goal.

“I thought the girls that came in for them worked really, really hard,” the coach said. Harvey also acknowledged that the Royals might have gotten away with some free points.

The Royals season is not quote halfway over, but with the FIFA break that saw only about a handful of players on the return flight to Salt Lake City, it feels as much like the midway point as any other.

“We just need to be better on the ball,” Harvey said repeating a theme that is already old news for the Royals. “I think when people put us under pressure we start to get worried and scared and we start to go long and we’re better than that.”

Specific to not having Sauerbrunn, Harvey added: “Becky adds a natural calm to our team and we just couldn’t bring that back in tonight. Because you know I’m a lunatic on the side and I can often roil people up too.

“We want to be better. We want to keep pushing. We know that we’re tough to beat, we reduce people to chances. People get close to our 18-yard box but they don’t get super close to scoring. We were disappointed on the (Sky Blue) goal tonight, I thought we could have defended that better. But we just have to be better on the ball and I think that’s going to be a consistent theme all year.”

Nicole Barnhart is the NWSL’s all-time leader among goalkeepers in games played, minutes, wins, shutouts, and even losses. The wins and shutouts are on account of the games and minutes but it is all because Barnhart is one of the best American keepers on the last decade. But this season has been different. Offseason ankle surgery left her less than fully fit for opening day. And the Royals grabbed Abby Smith in the Boston Breakers dispersal draft. Those two factors have relegated Barnhart to a position she has never faced at the club level—backup.

“It’s definitely tough,” Barnhart said following her first match of the season. “Coming back from injury took a lot longer than I ever thought it would which made getting in a little harder. But I’m just going to go out and training hard every day and whatever happens, happens.”

Barnhart got the game because Smith was called in by the USWNT, and her first significant action was diving in vain after Shea Groom’s 9th minute equalizer. That was the only thing Sky Blue got by her though, and the late goal handed “Barnie” her 45th career regular season win.

Said Harvey: “She’s such a professional. I know it’s been tough for her being on the sidelines and watching Abby. But she’s been a super pro and pushed Abby to her limits. Obviously for me it’s a luxury for me to have someone like that come up and step in. And she didn’t miss a beat—didn’t miss a beat.”

-Great number in Seattle on Saturday. I just hope it wasn’t driven by a desire to see Alex Morgan since that USWNT schedule has been known in league circles since before opening day.

-Can someone tell me how the Houston Dash are now in the bottom third in average attendance? If it stays, that might be the biggest failing of the season on or off the field.

-This tweet struck me as a pretty good summation of the disturbing interview that Jaelene Hinkle gave to The 700 Club last week:

-Two weeks ago a question on the podcast asked how contracts were handled for pregnant players. The answer from NWSL is that they are treated the same as injured players. That means they are still paid and cannot be waived, but there is no time added to their contracts.

-Midge Purce was sent home from national team camp with a sprained ankle. No immediate word on whether she will be ready to play when the Thorns season resumes June 16.

-Rose Lavelle joined national team camp which not only means she will miss the Spirit match Friday, but it also has lots of fans holding their breath and hoping her bad hamstring makes it through camp none the worse for wear.

-The bright side of Lavelle leaving is that the Spirit have signed Maddie Huster as a National Team Replacement Player. Huster, a Spirit draft pick this season, is the younger sister of Tori Huster, the longest tenured player on the club and only one remaining from the founding season of 2013.

-Which Courage result was more impressive? The 4-1 dismantling of the Thorns or the 1-1 draw in Houston with a shell starting XI? You can make an argument for either. In the long run it’s probably what they did to the Thorns with a full compliment of players, but don’t think for a second that the draw in Houston to keep the unbeaten run going didn’t fire up some of those away from the team to keep it going next week.

-Speaking of 9-0-3, that is the third 12-game unbeaten streak since NWSL launched in 2013, and it matches the 2016 Thorns who went 7-0-5. The record is held by the 2014 Reign who went 13-0-3 for a 16-game run. All three streaks began at the start of a new season but they are the three longest regardless of when they started and including streaks spanning multiple seasons. The Courage did lose pace with the ’14 Reign who were 10-0-2 through a dozen games.

-Sky Blue is on the other end and at 0-8-1 are only two matches from tying the record for worst start in NWSL history. The 2013 Reign started 0-9-2. Sky Blue play on Friday and coach Denise Reddy was asked if she liked playing through the FIFA window or preferred a breather. “Just frickin play,” she said. “Go to work.”