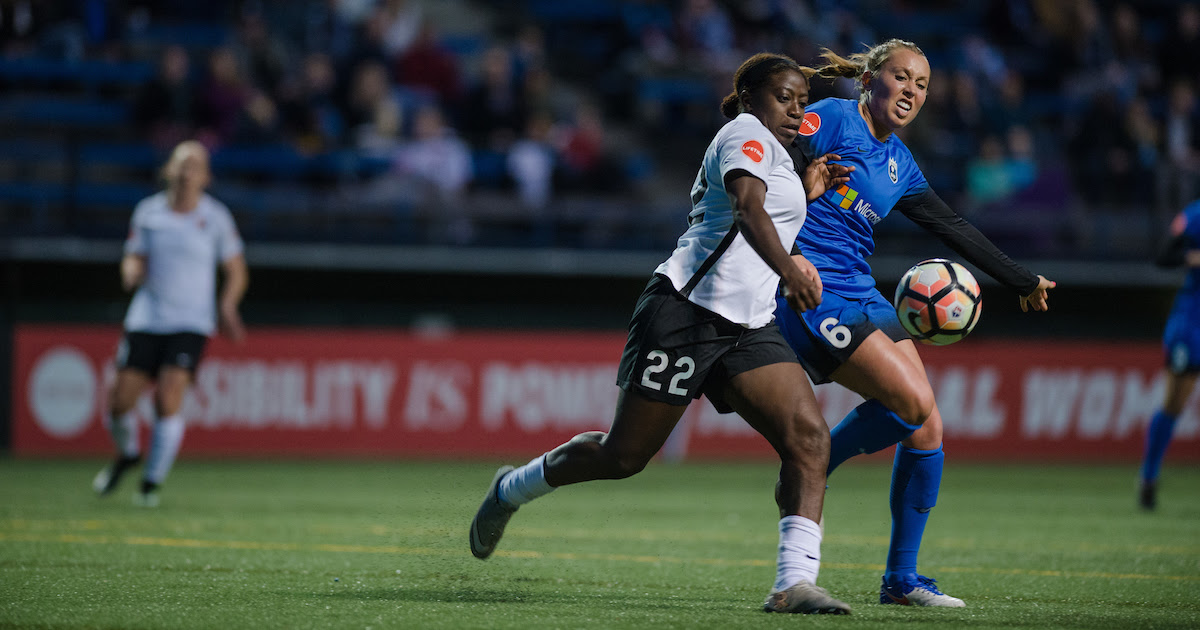 Mandy Freeman inadvertently redirected a Gunny Jonsdottir cross in for an own goal in the 85th minute own goal to give the Utah Royals a 2-1 victory over Sky Blue FC in the club’s first visit to New Jersey. The loss dropped Sky Blue to 0-8-1 and within striking distance of the worst start in NWSL history. In 2013 the Reign began 0-9-1, went to 0-9-2 and then won their first match.

The match was played without several key players who departed a day earlier for United States training camp. Sky Blue were without Carli Lloyd and Savannah McCaskill while the Royals had to make due without Amy Rodriguez, Becky Sauerbrunn, and Abby Smith, the latter absence allowing Nicole Barnhart to get on the pitch for the first time in 2018.

The Royals jumped out early, taking the lead in the 3rd minute. Jonsdottir won the ball in midfield and then played give-and-go with Taylor Lytle to beat Christina Gibbons. Jonsdottir then sent a looping cross to the far post and Diana Matheson slid in and made a solid finish to make it 1-0.

Sky Blue responded to equalize before 10 minutes were up. Katie Johnson ran one down on the left and passed it back through a space in the Royals defense where Shea Groom one-timed it by Nicole Barnhart for her first Sky Blue goal.

The hosts had the run of play through most of the second half but were unable to capitalize with a goal which would have given them their first lead of the season. Instead the surrendered a counterattack that ended with Jonsdottir sending another decisive cross, this one intended for Katie Stengel. Freeman reached out and knocked it down with her leg but the bounce eluded Kailen Sheridan for the winning goal.

In a very wet, much delayed game, the Chicago Red Stars ended their seven-match winless streak with a victory at Washington. What was supposed to be the Lifetime Game of the Week ended up being delayed for over five hours due to lightning strikes in the area. It rained throughout the game, picking up very heavily in the first half and completely saturating the pitch.

Due to injuries and international call ups, both teams made changes, notably in goal, where Emily Boyd made her professional debut and Kelsey Wys got her first start of 2018. Taylor Smith also moved from defender to forward for the Spirit, while Rosie White got her first start for Chicago.

Neither side was able to create much in the way of quality soccer in the first half due to the rain, and in fact the weather conditions probably played a role in the first goal. In the 25th minute, after Joanna Lohman was carded for a foul on Yuki Nagasato, the Japanese international sent the ensuing free kick directly on goal. Wys made the block but was unable to get a grip on the wet ball, and Sam Kerr connected on the rebound.

The Red Stars dominated the first half as much as any team could in conditions so poor that the ball occasionally just stopped rolling, but they went into the locker rooms at the halfway mark only up by one. The field was able to drain during halftime, and as a result, the game opened up in the second half. Washington began to threaten Boyd more, with Ashley Hatch particularly active, and Rose Lavelle played a role in several good chances after she subbed on in the 60th minute.

However, before any of that could occur, the visitors doubled their lead in the 48th minute. Nagasato brought the ball down inside Washington’s box and passed it off to Alyssa Mautz. Rebecca Quinn dropped to close off Mautz’ angle on net, freeing up space for Nagasato at the top of the box. Mautz passed it back and Nagasato one-timed it into the back of the net.

The rain came back as the game wound down, but the damage was already done. Chicago (3-3-6), with Sam Kerr’s first-ever win as a Red Star, moves up to fifth place. They will host Portland on June 16, after the international break. Washington (2-7-2) remains in eighth place and travels to Sky Blue next Friday.