Cindy Parlow Cone is one of two former USWNT players inducted into the National Soccer Hall of Fame. (Photo copyright Meg Linehan for The Equalizer)

Milbrett is one of the U.S.’s most accomplished players in history. She enjoyed a successful 15-year career with the USWNT, making 206 appearances and scoring exactly 100 international goals, one of only six USWNT players to achieve the latter.

She was a member of the 99ers, the storied USWNT team that won the 1999 World Cup, and played in two other World Cups. She also won an Olympic gold medal in 1996, scoring the game-winning goal during the gold medal match against China, and silver in 2000. She was named the U.S. Soccer Female Player of the Year in 2000 and 2001.

The Portland, Oregon native attended college at the University of Portland, where the striker scored 103 goals, tying the then-NCAA career goals record set by Mia Hamm. The accomplishment also made her one of only two players—Hamm being the second—to score 100 goals at both the collegiate and international levels.

She is currently the director of coaching for the Colorado Storm’s U-16 & U-17 Girls ECNL team.

Parlow Cone earned her first cap with the senior USWNT in 1996 when she was only 18 years old. Over her nine-year career with the national team, she made 158 appearances, and, alongside Millbrett, won Olympic gold in 1996 and silver in 2000—plus another gold in 2004—and the 1999 World cup. Two of the 75 international goals she scored were during that World Cup, including the game winner in the semifinal round against Brazil. She remains the youngest player of any gender to win both an Olympic gold medal and a World Cup.

At the collegiate level, Parlow Cone also won championships, two consecutive championships to be exact, with the University of North Carolina. During her four years as a Tar Heel, she scored 68 goals, won the MAC Hermann Trophy two years in a row (1997-1998), and was named the U.S. Soccer Young Female Player of the Year in 1998.

She returned to UNC as an assistant coach and helped lead the school to four more NCAA titles. She then was hired to coach the Portland Thorns during the inaugural 2013 season, and once again coached her team to a championship win.

She is currently serving as the girls director for the North Carolina FC Youth development academy.

Before the International Champions Cup (ICC) debuts its four-team inaugural women’s tournament in July, its organizers are already planning to expand next year’s tournament to 16 teams, as reported by Jonathan Tannenwald of the Philadelphia Inquirer.

Half of the 16 teams would come from the NWSL, while the other half would be comprised of teams worldwide whose male counterparts compete in the men’s ICC.

“We thought this would be a great way to bring the women’s game together here in the U.S. with the women’s game in Europe and beyond,” Charlie Stillitano, who runs the ICC, said. “Our hope is that a few years from now we’ll be looking at the women’s tournament saying it’s the most prestigious club team tournament in the world, and I think we have that opportunity.”

Two of the teams expected to join next year’s tournament are Chelsea, who were originally scheduled to compete in this year’s events before voluntarily withdrawing, and Mexico’s Club América. A team from Australia’s W-League could also be in the mix.

Scheduling the tournament could be an issue though. This year’s tournament runs during FIFA’s July international window, the same time that the USWNT is hosting its second annual Tournament of Nations (ToN). Although the ICC would be a very different tournament than the ToN, the two overlapping would likely mean the eight participating NWSL teams would be competing without some of their best players.

Stephanie Labbe has signed with UWS’s Calgary Foothills WFC for the remainder of the 2018 season. (photo copyright Lewis Gettier)

Canada goalkeeper Steph Labbé has signed with Calgary Foothills Women’s FC of United Women’s Soccer (UWS) for the remainder of their 2018 season.

The move comes less than a month after Labbé announced on her blog that the Premier Development League (PDL) had deemed her ineligible to play on her team’s male counterpart, Calgary Foothills FC, because of her gender. Before the PDL’s ruling, Labbé had been named one of three goalkeepers for the men’s club.

“I am extremely grateful for the Foothills staff for giving me the opportunity to stay sharp as I prepare for the next phase in my professional career,” said Labbé in the league’s official statement. “I have been welcomed by the team and staff of the Calgary Foothills WFC and am excited to bring my experience to this group and continue to grow the game in Canada.”

Regularly training and getting more competitive minutes is important for Labbé, who was recently one of two goalkeepers named to Canada’s squad for an upcoming friendly against Germany. She is also poised to be named to her country’s squad for the 2018 Concacaf Women’s Championship, the federation’s World Cup Qualifying tournament, to be held in October. 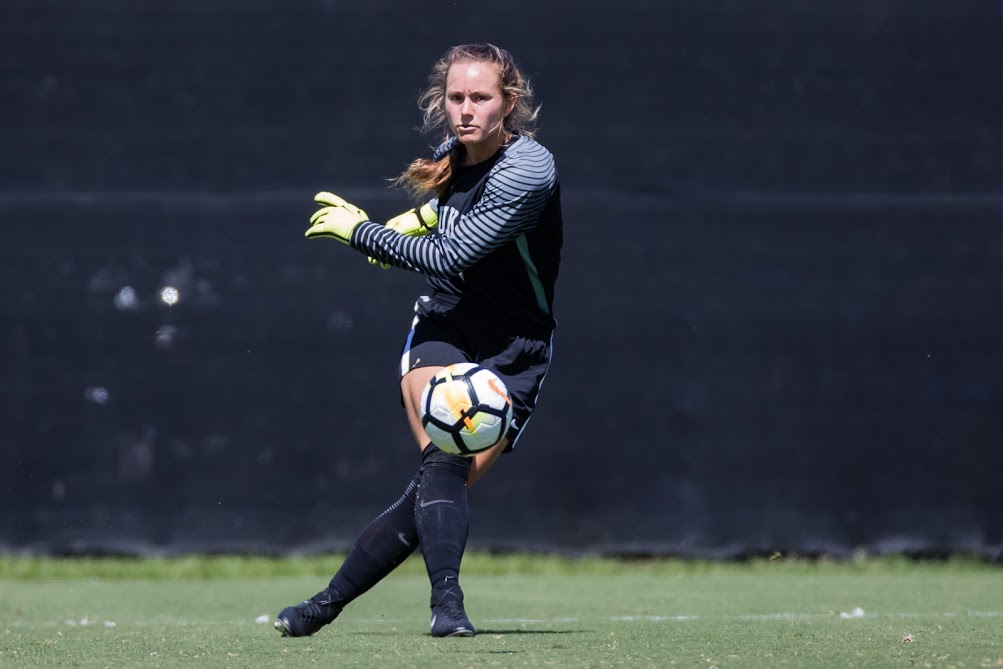 Utah Royals FC announced on Wednesday night that they had signed third-string goalkeeper E.J. Proctor as a goalkeeper replacement ahead of the team’s June 2 road clash against Sky Blue FC.

The signing is the result of Abby Smith, who has played every minute in goal for the Royals so far this season, being called into camp with the U.S. women’s national team (USWNT) for a pair of friendlies against China. Smith, along with the other USWNT players, will report to camp on June 1, making her unavailable for NWSL Week 10.

Proctor came to the Royals via the 2018 NWSL College Draft, where she was selected in the fourth round. Before her professional career, she was starting goalkeeper for Duke, seeing 71 starts in 84 appearances, tallying 201 saves for a 0.65 goals against average, and recording 35 shutouts in goal for the Blue Devils. Fourteen of those shutouts came in her senior season, where she helped lead Duke to the College Cup. 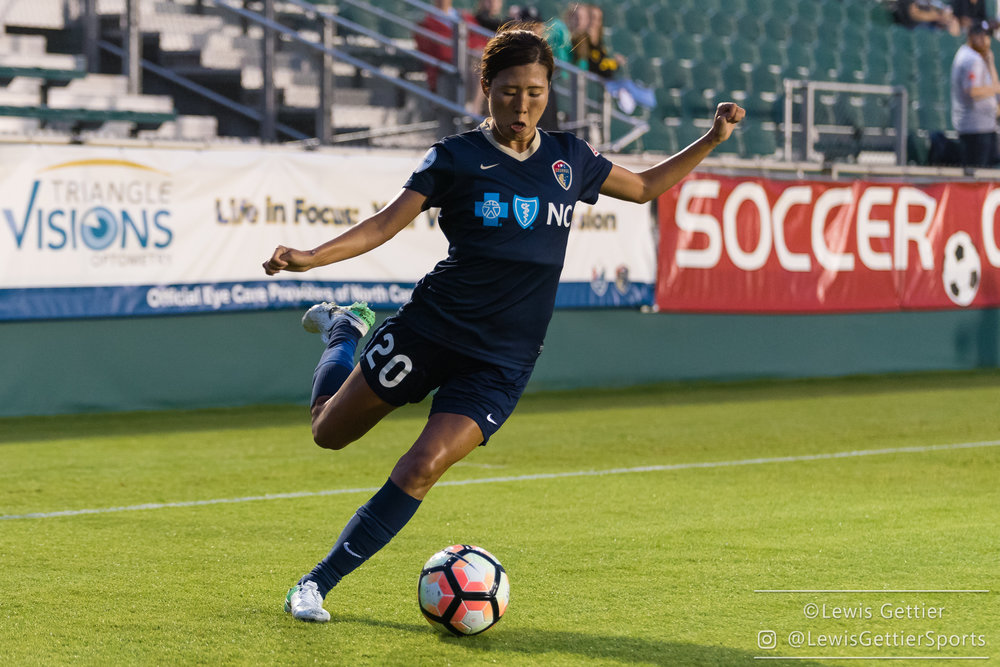 Yuri Kawamura was activated by the North Carolina Courage ahead of this weekend’s match. (photo by Lewis Gettier)

The North Carolina Courage announced on Thursday that they had made five roster moves ahead of their Week 10 road match against the Houston Dash.

Defender Yuri Kawamura was removed from the 45-day disabled list and added to the active roster. Kawamura suffered a right ACL and meniscus tear during the team’s May 27, 2017 match in Chicago that required surgery, ending her season early. Prior to her injury, the Japanese international made seven starts in eight appearances for the Courage.

The Courage have also signed defenders Morgan Reid and Ryan Williams, midfielder Sarah Teegarden, and forward Frannie Crouse as four National Team replacement players. Crouse, signed to the Courage’s official 23-player roster after being selected as the No. 10 overall pick in this year’s college draft, was apparently waived by the club on Monday before being re-signed on Thursday as a National Team replacement player.

The signings are the result of Abby Dahlkemper, Crystal Dunn, Merritt Mathias, Sam Mewis, and McCall Zerboni being named to the USWNT roster for its upcoming friendlies against China, and Denise O’Sullivan also being away on international duty with Ireland.

Lauletta: Everyone on the Courage can pass, the trouble in Portland, and addressing the elephant in the room
NWSL Week 10 preview part 2: Goodbye national teamers, hello depth