A family wedding had me on the Equalizer injury report as OUT (excused absence) for the weekend, and catching up on all of the games in time to produce a column was always going to be a challenge. Fortunately for me, but for almost no one else, we learned last week that players called in to the United States national team training camp next month will report June 1. There are NWSL games June 2 and 3. And just like that, a column was born.

Let’s get the emotional part out of the way first. Like all other NWSL fans, I was disgusted at learning about this. Here we have a pro women’s soccer league featuring some of the best players in the world and there will be one entire weekend without many of them. Worse still, losing the USWNT players for the weekend appears to be entirely preventable.

No. It is entirely preventable. The question to ponder is whether or not doing this serves the best interests of all the groups it affects.

The national teams are at the top of the U.S. food chain and for good reason. The idea is to win the World Cup, something the senior women’s team has done three times including the most recent renewal three years ago. If U.S. Soccer made NWSL a reality with its pockets, the national team created what demand there is for a professional league.

Jill Ellis coaches the national team and her job is wide ranging, but at its core she is charged with winning trophies. There are two that matter—the World Cup and the Olympics. Should Ellis care about the future of NWSL? Sure she should, and I would be surprised if she didn’t. But in trying to win the World Cup next summer, should every decision Ellis makes be with the best interest of the professional league in mind? I would argue no.

At the same time, calling players in for June 1 cuts into training by a matter of days to prepare for two friendlies against China. Of course every training session—even ones ahead of relatively straightforward exhibitions—is a small part of the work that everyone hopes comes to fruition beginning a year from June in France. I never played any sport at a level worth discussing, so take my opinion as you will, but I don’t buy that these extra days next week will have more than a negligible influence on the World Cup team.

Two years ago, debate raged when Ellis opened a camp prior to the FIFA window, seemingly giving her players extra days together to be at their cohesive best for that summer’s Olympic games. When the tournament arrived the “more time, more rhyme” point of view took a major hit when the U.S. played average to poor soccer and wound up being sent home before the semifinals for the first time ever.

Circling back to how the priorities of the national team mesh with the professional league, I cannot come up with a justification for pulling players from their club teams on Friday rather than allowing them to play in a league that needs every break it can get.

The club owners are clearly middle management in this debate. They can push as hard as they want for their players to be around for all 24 games, but they’re not paying the national team players. And that makes it quite difficult to create leverage. Additionally some clubs elected to schedule matches during FIFA windows, thus voluntarily creating scenarios where their best players would be unavailable. That decision—and there is a ton of merit to it in certain markets—also cannibalizes leverage when negotiating with U.S. Soccer about when national team players will shuttle in and out of their NWSL teams during a given year.

If there is one area where clubs can be better that is within their control, it is with communication. A well-placed source has told me that the rough schedule of when USWNT camps would convene was discussed with the owners and known openly at least since March. No one is expecting any teams to make this part of a marketing campaign, but some sort of documentation would at least let customers make informed decisions about which games to attend, travel to, unload extra tickets, etc.

What about the fans?

If owners are middle management then the fans are the rank and file workers forced to execute orders from on high. This is the only women’s professional soccer league we have and for better or for worse, it is here to be supported. But fans are correct to be angry, and they should be letting their teams know about it.

Attending any given match comes with all sorts of uncertainty. A given player could be injured, suspended, resting, traded, or on personal leave, and often these factors are not known until the hours before kickoff. But say you scanned the Spirit schedule and saw the juicy Lifetime matchup against the Red Stars on June 2…and you bought good tickets well in advance? All of a sudden reality has hit that the following players won’t be there: Mallory Pugh, Andi Sullivan, Rose Lavelle, Alyssa Naeher, Julie Ertz, and Casey Short.

If you are a distant fan deciding how much of your time, energy, and bank account will be targeted to NWSL, do you go back? If you randomly land on Lifetime and pick up some of the game only to find precious few players of note, do you keep the game on? Do you look for further opportunity to find the league? Everyone is already on notice for August 5 when the league will play four games only three days after Tournament of Nations (a tournament which also includes players from Australia, Brazil, and Japan.)

Within soccer this is not an issue isolated to NWSL. It is, however, unique in that the governing body has such tight financial and managing oversight of the league. Taking it outside of soccer, the NBA faced a recent spate of coaches resting star players en masse, sometimes for highly promoted national television games. This season the league tweaked its schedule by elongating the calendar and also by strategically placing off days around national television spots to deter coaches from resting players. One year in, the results are positive, and the complaints are down.

U.S. Soccer’s decision to fund parts of NWSL was the magic potion that finally gave us a league with more than three years of staying power. But at some point that relationship needs to end. It can’t end now, and few are willing to discuss it, but I do hope that every NWSL owners meeting includes at least a few minutes where a U.S. Soccer exit strategy is discussed.

In the ongoing debate around the differences between women’s and men’s soccer, there is one element that cannot be disputed. On the men’s side, the best players get rich playing for the top clubs in the world. The international game is more of a pride play and an addition to club life. For the U.S. women, the national team remains ‘the club.’ It is where the checks and the prestige come from and thus where the loyalty lies. Until that changes, these situations are not going away.

In closing, U.S. Soccer and NWSL are partners in women’s soccer which, at the league level, is far from a sure thing to survive and thrive. It seems to me they can do better, and could have done better handling the upcoming FIFA window.

— Very encouraging to see the Royals conclude their four-game homestand with a slight attendance uptick. All signs continue to be extremely positive from a business perspective. On the flipside, Sky Blue has been skewered by weather in two of three home matches, but if you line up their 15 home matches since the start of 2017 in order of attendance, the three from this season occupy three of the four bottom spots. 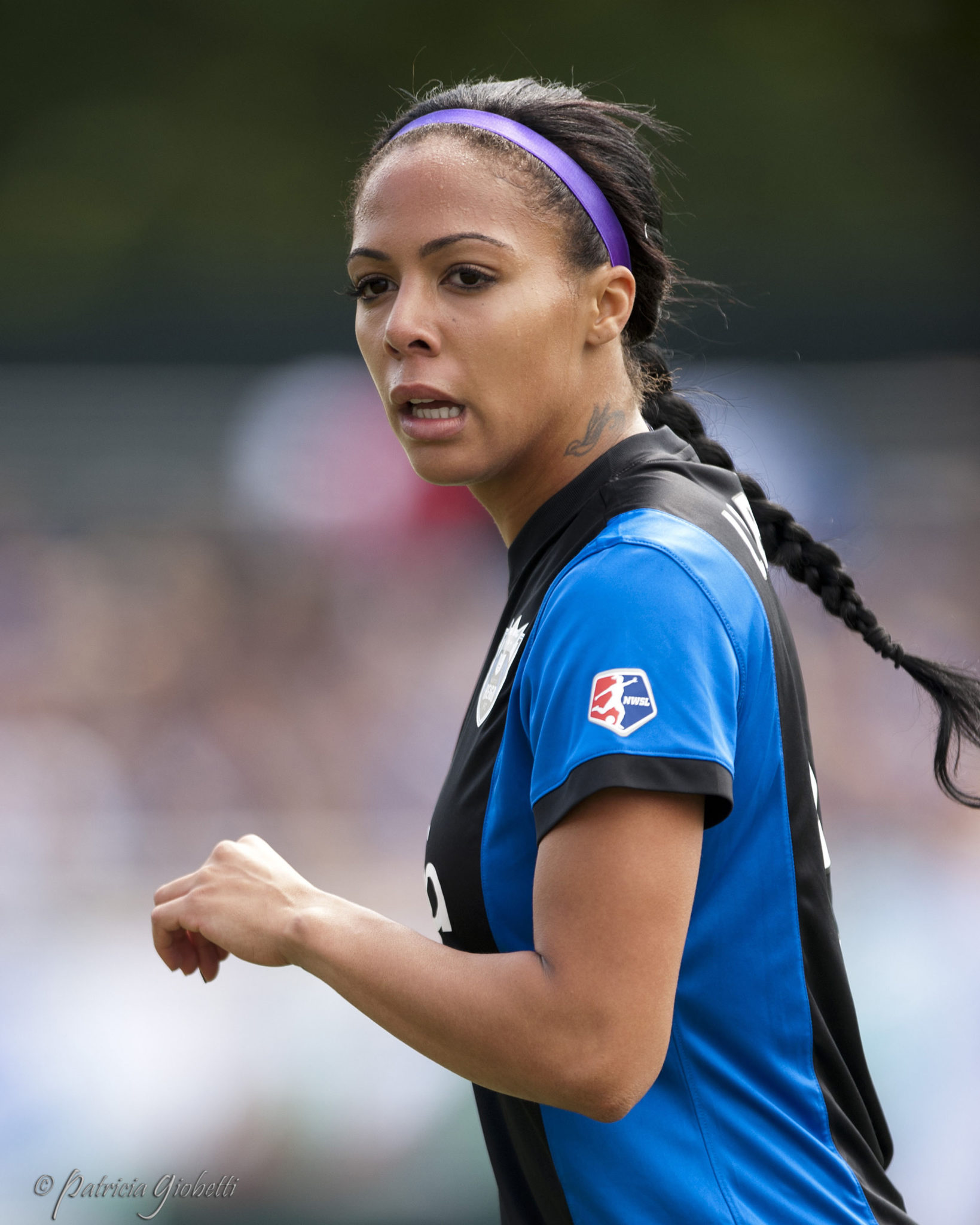 Sydney Leroux was part of the Reign team that started 13-0-3 in 2014.. (Photo Copyright Patricia Giobetti for The Equalizer)

— The Courage’s 7-0-2 start matches the 2014 Reign for the best mark after nine games in NWSL history. That Reign team won their next four on the way to a 13-0-3 start. The only other team to go deeper than nine games into a season without losing was the 2016 Thorns, who were 4-0-5 after nine and 7-0-5 before tasting defeat for the first time.

— Sky Blue meanwhile has equaled the Reign for a more dubious mark — the worst six-game start in league history at 0-5-1. The Reign turned that trick in 2013 when they took it all the way to 0-9-1, then to 0-9-2 before finding the first win in club history. The only other team to open without a win through six games was the 2013 Red Stars at 0-4-2 (they drew the Reign opening the day.)

— The Washington Spirit host Sky Blue on Wednesday and visit Houston on Sunday, and somehow it feels like the two matches could be a partial referendum on the club’s recent youth movement.

— The Spirit are also set to hire Lisa Cole as an assistant coach. It sure sounds like Cole got a raw deal in Houston, and since the Dash aren’t talking, it’s hard to find the other side of that story.

— Ellie Carpenter became the youngest player to score a goal in an NWSL match and she did on the field of the player whose mark she broke–Mallory Pugh.

— Carpenter’s goal stood up in a 1-0 Thorns win, the club’s first shutout of the season.

Spirit vs Thorns: Ending the wrong kind of streaks
NWSL Week 9 Preview: Are streaks made to be broken?