Spirit vs Thorns: Ending the wrong kind of streaks 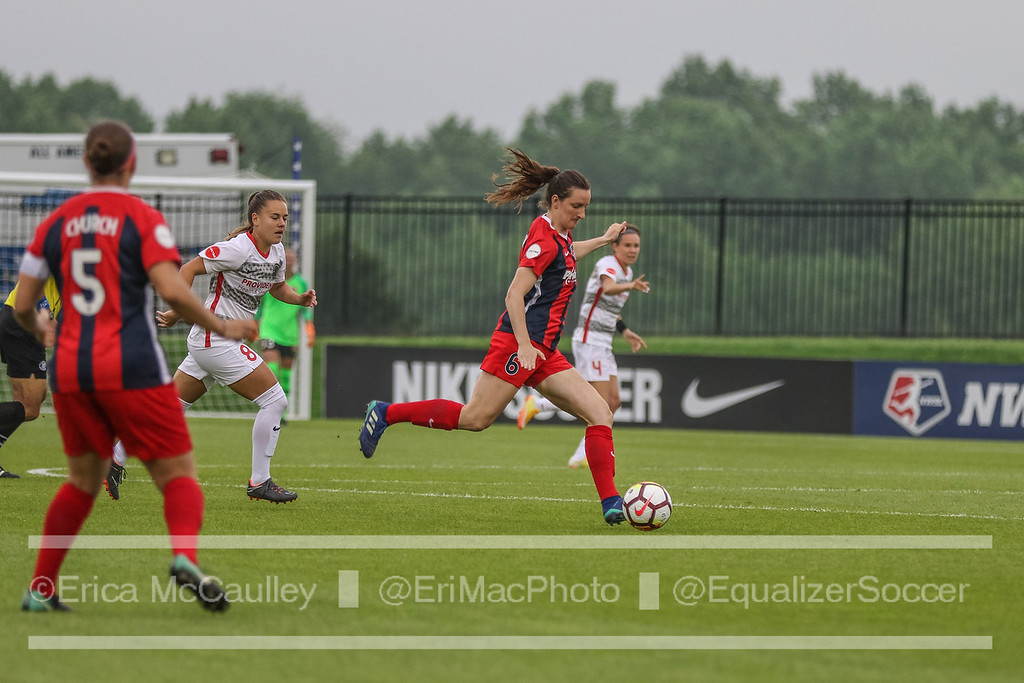 Andi Sullivan said it was a good week for the Spirit, but the result was the same (photo copyright EriMac Photo for The Equalizer)

BOYDS, MD. — While it’s premature to call a game in May a must-win affair, even with this season’s schedule,  there’s no denying that last Saturday’s contest Portland Thorns and Washington Spirit was important for each side. With both teams riding a five-game winless streak, the need for a positive result to get on course was evident. Washington and Portland each had stretches in which they dominated the game.

The Thorns, of course, walked away with the victory, thanks to Ellie Carpenter’s second-half goal. Carpenter’s game-winner, ended a frustrating month or so for Rose City that saw Portland’s efforts thwarted by a flubbed clearance and seemingly good goals that were waived off.

“Yeah, it’s been very frustrating and I think each game we’ve been improving on little things and we’ve had big mistakes that have been leading us to this ties and losses,”  Lindsey Horan said after the match. “Coming in here we kind of just put everything together and said, we need to eliminate all these mistakes and we need a win.”

THE LOWDOWN: The complicated relationship between the NWSL and U.S. Soccer

Head coach Mark Parsons was certainly pleased with the result but to him playing the way his side did means more. Thorns won a match that required weathering moments in the game where the opponent has the better of the ball and doing the gritty work that’s required to come out on top.

“It means a lot but I think it means more to play like that,” Parsons did. “It is what made us last year because there are so many good teams in this league at some point it’s going to be, you’re going to be defending and clearing and putting your body on the line. We did that and we played really good stuff, created some really good chances.”

On the other side of a 1-0 loss for the second week was the Spirit. The latest loss brings the slide to six,  the last three of which have seen Washington fail to crack the score sheet. The midfield for the Spirit has been an area of particular concern for the side despite an impressive collection of talent the team has assembled in that area of the pitch.

On Saturday, Washington outshot the Thorns 14 to 10 in the match, including 8 to 5 in the first stanza and was on the front foot for stretches during the contest. Despite playing better than it had in for the last several weeks, the result was the same.

“I think this week was a good week for us in the fact that we were upset with the start of the season and our results that we were getting and all took a hard in the mirror and came together this week,” Spirit midfield Andi Sullivan, “I thought it was a really good week so I was really happy with how we performed. It’s just unfortunate that you felt like everything was going really well and still ended with a loss.”

After the Portland loss, this week’s matches increase in importance for Washington. The Spirit, who occupy eighth place in the league’s standings, will face the teams that join the club in bottom third of the table. It will be the first meeting of the season with both the Houston Dash and Sky Blue for Washington.

During post game on Saturday, head coach Jim Gabarra put it very bluntly about the need for a win in the squad.

The key to getting those goals, and much-needed points, Gabarra feels is being aggressive and physical moving forward.

Washington missed its chance to get going in the right direction Saturday. The question remains, can they get back in the win column before they head back on the road and the 2018 calendar turns another page?

Momentum is a strange concept, something that’s usually easier felt that described in sports. What is clear is that a player or a team only gets so many chances to grab it. The Thorns appeared to do just that last weekend. Can the Spirit make good on its opportunity Wednesday before 2018 turns into a second straight lost season?