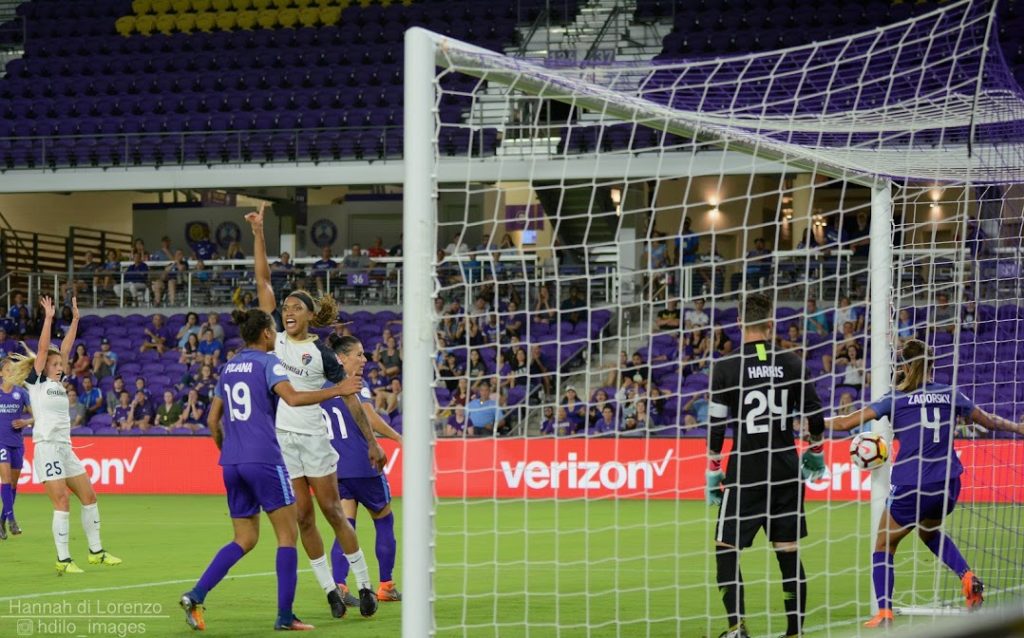 Having built an undefeated run mostly on the heels of their defense, the North Carolina Courage scored three goals after halftime including Jessica McDonald’s 90th minute game winner that sunk the Orlando Pride, 4-3. The win lifted the Courage to 8-0-2 which matches the 2014 Seattle Reign for the best 10-game stretch in NWSL history.

The Courage came racing out of the gate, and as it their wont, could have been ahead by multiple goals before halftime but settled for one. McDonald got that one too on an assist from Denise O’Sullivan who was following up a McCall Zerboni shot that took a deflection.

The start of the second half went the other way with the Pride getting off on the front foot. They capitalized when Marta got into space on the left side and sent a low cross to the near post where Chioma Ubogagu got there just in time to slip it underneath Katelyn Rowland.

Almost as quickly as the match was tied, the Courage struck for two quick ones against the run of play. First the ball squirted loose on a dodgy touch by Alanna Kennedy and Debinha sprinted to beat three Pride players to the ball and finished to make it 2-1. Five minutes later, Sam Mewis hit the post on a cross from Crystal Dunn, but the ball bounced sideways and hit Harris and sneaked in.

The two-goal lead lasted only three minutes before a Christine Nairn corner kick was headed in by Kennedy to make it 3-2. And the Pride drew level in the 83rd when Marta got free down the left similar to the first goal, but this time the cross went to the far post where substitute Rachel Hill was waiting for the finish.

And @ORLPride pulls it back within one, thanks to Kennedy! #ORLvNC | #NWSL pic.twitter.com/yOEYZQGMZS

It all crumbled for the Pride in the 90th minute. First Abby Erceg read an Alex Morgan pass intended for Rachel Hill, stepped up to intercept it, and gave it to Jaelene Hinkle. Hinkle whipped it in to the top of the six where McDonald had slipped behind Shelina Zadorsky and Poliana. McDonald popped it almost straight up in the air, eluding Harris’s effort to thwart her and then bounding in off Zadorsky’s chest.

The Courage moved a full dozen points clear of the Reign at the top of the table. They have the weekend off before a visit to Portland in a week’s time. The Pride (3-3-3, 12 pts) are on their way to Chicago where they will face the Red Stars on Lifetime this Saturday.

The Washington Spirit defeated Sky Blue FC thanks to a second-half goal from the reigning NWSL Rookie of the Year, Ashley Hatch. Hatch’s game winner snapped the Spirit’s six-game winless streak dating back to March 31 while extending Sky Blue’s to seven on the year. Sky Blue is now tied with the 2013 Seattle Reign for the worst seven-game start in NWSL history.

The difference maker in the match occurred in the 64th minute when the Spirit were awarded a free kick within striking distance. Andi Sullivan sent the set piece ball right to Hatch’s head, and the resulting header bounced out of reach of Sky Blue keeper Kailen Sheridan for the game-winning goal. The goal is Hatch’s second on the season, while the assist is the first of Sullivan’s professional career.

The set play pays off for @WashSpirit – Hatch gets the go-ahead goal.#WASvNJ | #NWSL pic.twitter.com/tGDUE6DRYr

Just 10 minutes after Hatch’s goal, Rose Lavelle entered the match, making her Washington Spirit debut after being sidelined for the start of the season with a hamstring injury. The appearance was Lavelle’s first since September 10, 2017, when she played 34 minutes in the Boston Breakers’ home loss to the Portland Thorns.

The match wasn’t all in favor of the Spirit though, as Sky Blue put four shots on goal, one more than the Spirit tallied. Janine Beckie was the most threatening attacking player for Sky Blue during the first half, putting Spirit netminder Aubrey Bledsoe to the test with a number of close calls on goal. However, Bledsoe was equal to the task, and denied Sky Blue of each opportunity to earn her second clean sheet in a Spirit kit.

Sky Blue FC (0-6-1, 1 point) will next return to Yurcak Field on Saturday when they will host the Seattle Reign for the two teams’ third and final meeting of the season. The Washington Spirit (2-5-2, 8 point) will depart the Maryland Soccerplex in favor of BBVA Compass Stadium, where they will take on the Houston Dash on Sunday.

As coaches are wont to do for midweek games, both sides opted for lineup rotation. Houston’s Haley Hanson went to the bench while Linda Motlhalo returned to the XI. Michelle Betos returned to guard the net for Seattle and Elizabeth Addo got her first start, while both Jess Fishlock and Megan Rapinoe were on the bench.

The first half began all Seattle, with Jane Campbell forced to make her first save just two minutes in. It took nearly another two minutes for the Dash to get the ball in their attacking half. Although the Reign lacked a little bit of their usual bite, they still controlled the game well, corralling the occasional Dash counterattack and generally forcing Houston to fall back in their box.

It paid off in the 13th minute. Allie Long sliced up the Houston backline with a pass to Jodie Taylor, who flicked it over to an open Beverly Yanez. The striker calmly finished with a low roller past Jane Campbell.

Yanez calmly finds the corner to give @ReignFC the lead on the road.#HOUvSEA | #NWSL pic.twitter.com/iLA2M4jQLR

After their goal, the Reign appeared to relax and allowed Houston to see a bit more of the ball. However, the Dash couldn’t really get on the same page and find the final pass, often snuffed out by Lauren Barnes. Seattle ended the first half with 69 percent possession and limited the Dash to three shots, none on target.

The tables would turn in the second half. Although Rapinoe came on immediately after the break and breathed some life back into the Reign, it was the Dash subs who made the biggest impact. Lindsey Agnew, Thembi Kgatlana, and Veronica Latsko all helped the Dash take charge in the last 45.

In the 68th minute, after Nichelle Prince was fouled by Kristen McNabb, Rachel Daly sent in a long indirect free kick that found first the head, then the left foot of Kristie Mewis after her initial header was blocked by Long. Mewis’ shot was past Betos before she could react.

Kristie Mewis puts it home for Houston! The Dash have their equalizer in the second half.#HOUvSEA | #NWSL pic.twitter.com/symv8QSjJt

With both sides pressing for a late go-ahead goal, the game seemed destined to end in a one-one draw. Seattle struggled with finishing and really began to look gassed, while the Dash were snappier with their decisions but kept getting denied.

Halfway through the three minutes of stoppage, a cross from Alyssa Kleiner sailed over Campbell and ricocheted off the post. Allysha Chapman cleared the ball ahead to Kyah Simon, who sent it forward to Daly, who found Kgatlana mid-run. The forward streaked up the left flank before veering for the center of the park above the box before passing off to Latsko on the right side. The rookie took a touch to settle and launched a shot, which deflected off Steph Catley to sneak in at the far post and put Houston in the lead.

The 2-1 victory gives Houston their first win at home this season and not only their first ever win over Seattle, but the first points they’ve ever taken from Seattle in their existence. The Dash sit in seventh place and improve to a 2-4-4 record, with both wins courtesy of a late Kgatlana to Latsko game winner. They host Washington next Sunday. Seattle (4-2-2) retains second place and travel to Sky Blue on Saturday.

Continue checking back with The Equalizer as we update you on all of tonight’s NWSL action.