Also in today’s Roundup, Rose Lavelle is off the injury report, Brandi Chastain receives a unique honor, and Crystal Dunn takes home Player of the Week.

England and Olympique Lyon defender Lucy Bronze won the 2018 BBC Women’s Footballer of the Year award, winning out over shortlist nominees Lieke Martens (second place), Sam Kerr (third place), Pernille Harder, and Dzsenifer Marozsan. Bronze has been a regular for England since her 2013 senior debut, becoming the first-choice right back. She scored the game-winning goal during the quarterfinal of the 2015 Women’s World Cup, where England won the bronze, their first-ever medal at a Women’s World Cup. Bronze has numerous Player of the Year awards to her name already, including those selected by the FAWSL, the Professional Footballers’ Association, and the FA, England’s governing association of soccer.

Bronze played for the University of North Carolina Tarheels in 2009, alongside Ashlyn Harris, Whitney Engen, Jess McDonald, and Tobin Heath. The Tarheels defeated Stanford, featuring Kelley O’Hara and Christen Press, for the championship, making Bronze the first British player to win an NCAA Cup. She was subsequently named an All-American.

The defender played for a variety of clubs in England, winning numerous FAWSL titles, an FA Women’s Cup, and a FAWSL Cup. In 2017 she moved to French powerhouse Lyon, where she now plays with Morgan Brian. On Thursday Lyon will take on Wolfsburg in the UEFA Women’s Champions League final. Bronze scored the lone goal that sent Lyon to the final over her former club, Manchester City.

Washington midfielder Rose Lavelle did not appear on today’s NWSL injury report and is expected to be available for tomorrow’s match against Sky Blue. Lavelle has been struggling with a hamstring injury for nearly a year, missing the majority of her rookie season with Boston before being picked up in the dispersal draft by Washington, for whom she has yet to appear.

To give everyone an idea about how long Rose Lavelle has been dealing with injury, she has only played 85 minutes (over three matches) in the last 345 days. https://t.co/yj3nEiu24L

Also notable on the injury report are Ashlyn Harris, questionable with left knee soreness, and Lynn Williams, who is out for the third game in a row with a right hamstring strain. The full injury report can be found below.

World Cup winner and Olympic gold medalist Brandi Chastain received an unusual honor when named to the Bay Area Sports Hall of Fame – a plaque that looks nothing like her. The BASHOF has since announced that the plaque, unveiled at the BASHOF banquet in San Francisco last night, will be redone.

Chastain has numerous ties to the Bay area, having grown up in San Jose and playing her college soccer at first the University of California, Berkeley and then Santa Clara University. Later, she returned to play for the San Jose CyberRays during all three seasons of the WUSA and the WPS’ FC Gold Pride, located in Santa Clara, in 2009. Chastain was named to the US Soccer Hall of Fame in 2017.

Dunn named Player of the Week 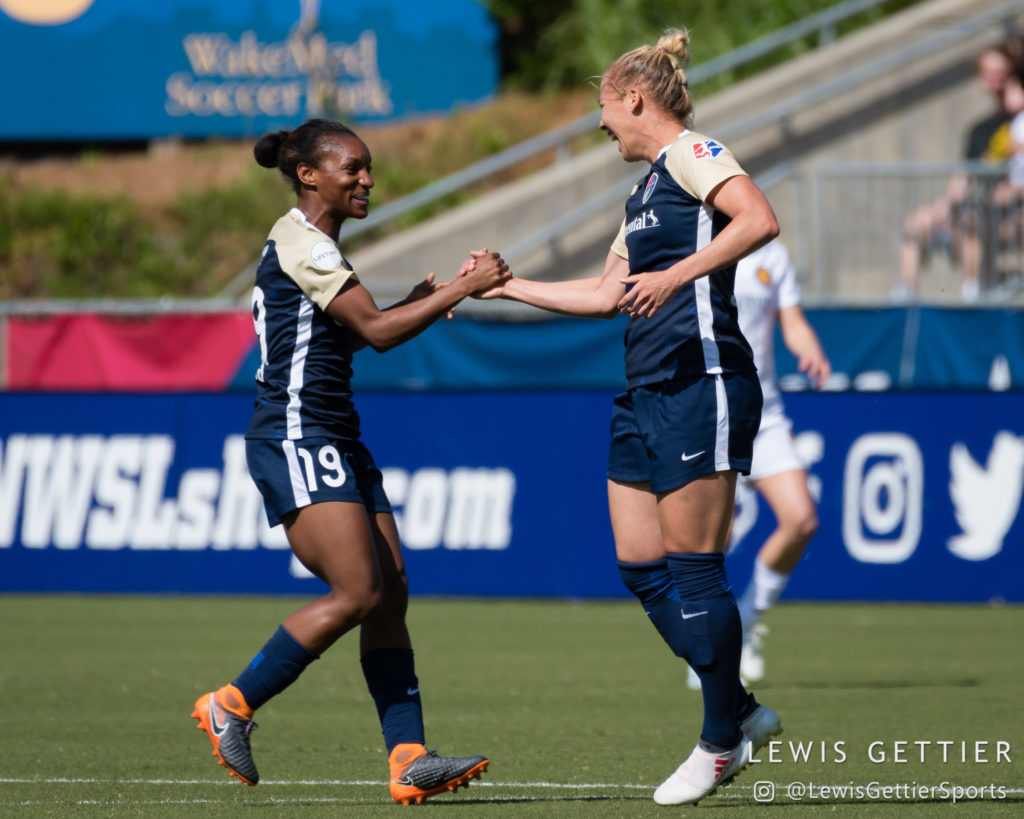 NC Courage defender Merritt Mathias (11) celebrates her goal with NC Courage forward Crystal Dunn (19) during a match between the NC Courage and the Utah Royals FC in Cary, NC in Week 4 of the 2018 NWSL season. Photo by Lewis Gettier.

North Carolina and USWNT striker Crystal Dunn was named the Player of the Week for Week 8 by the NWSL Media Association. This is her seventh Player of the Week selection during her NWSL career, edging out Megan Rapinoe for the all-time leader. Dunn scored the opening goal in North Carolina’s 2-1 win over Sky Blue last Saturday, finishing off a Jess McDonald cross in the 16th minute. Dunn has four goals on the season, tied for second in the league, and has helped the Courage to a record-tying undefeated streak in their first nine games of the season, holding firm to first place.