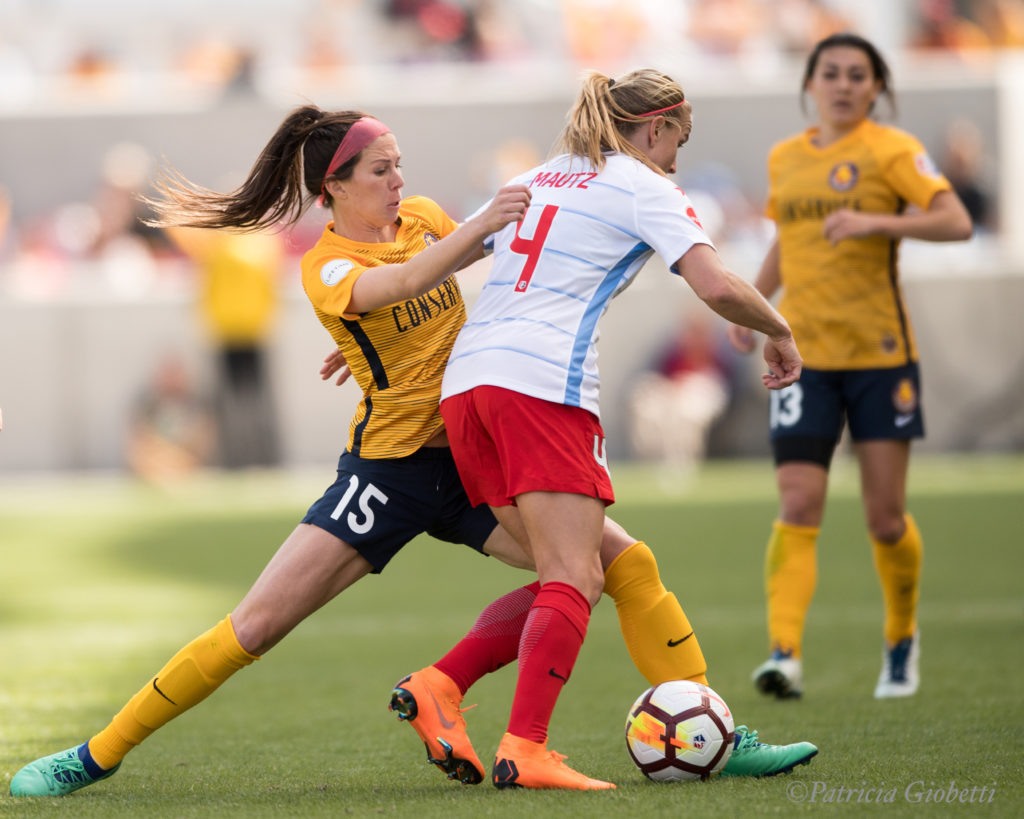 A second-half goal from Erika Tymrak was enough to clinch the Utah Royals FC’s second win of the season, a 1-0 defeat of the Houston Dash at Rio Tinto Stadium.

Tymrak’s goal was the highest point for the Royals, who dominated the entirety of the match. Not only did the home side enjoy the majority of possession (64%), but they also outshot the Dash 18-7, putting five shots on frame. On the other side of the ball, the Utah defense prevented the Dash from putting any of their seven shots on target, earning their fourth shutout of the season.

“I think each game we get better and better, and I hope from here we can go up. But I think it’s great soccer we played, and I think we can just build off of this,” goal-scorer Tymrak, in her first start for the Royals in place of the injured Kelley O’Hara, said in her televised post-game comments.

The match was a physical one, with three players—Brooke Elby (9′), Rachel Daly (12′), and Diana Matheson (55′)—all being shown yellow cards for bad challenges during the game. The Royals’ best chance of the first half also came off of a penalty kick awarded in the 37th minute following Amy Rodriguez being tripped up inside of the box. Matheson stepped up to take the penalty, but Dash goalkeeper Jane Campbell guessed correctly and dove to her right, making the save.

The lone goal of the match came in the 51st minute when Gunnhildur Jonsdottir made a run down the far side of the field before playing a cross in front of goal. It appeared as though Amy Rodriguez, standing in front of goal, was her intended target, but she dummied the ball for Tymrak, whose shot toward the bottom corner beat Campbell at the near post. The goal is Tymrak’s first of the season.

The Royals (2-1-5, 11 points) now embark on one of the toughest road tests of the season, as they travel to Providence Park to take on the Portland Thorns FC on Friday, May 25. The Dash (1-4-4, 7 points) will return to the field earlier, playing on Wednesday, May 23 at BBVA Compass Stadium when they host the Seattle Reign.

Saturday night’s match up between the Washington Spirit (1-4-2, 5 points) and the Portland Thorns (2-3-3, 9 points) featured two teams both yearning for a win, but it was the Thorns who came out victorious with a 1-0 triumph after 90 minutes of play. Ellie Carpenter scored the lone goal of the game in the 69th minute and not helped the Thorns to three points, but also became the youngest goalscorer in NWSL history.

The first chance of the match came early for the Spirit who won a corner kick after two minutes of possession. Whitney Church took the kick and found Mallory Pugh’s head. Pugh was unable to keep the ball on target and her header went high over the bar. A few minutes later, it was the Thorns shot at their first real look on net. Christine Sinclair slides the ball out of the air from outside the 18 yard box, but Spirit keeper Aubrey Bledsoe was able to take care of it easily. Just inside 10 minutes, it was the Spirit again with a solid attempt in front of goal. Estefania Banini found Caprice Dydasco streaking down the left side inside the box. Dydasco’s cross found Ashley Hatch who was in on goal. Hatch was able to meet the ball in the air with her head, but her effort went high. In the 17th minute of play, Midge Purce took the best opportunity of the night thus far. She capitalized on a second ball that the Spirit back line cleared out to the top of the box, with one touch to settle, she took her second touch as a shot on goal that went just high over the bar. Just a few minutes later, Tobin Heath had her first chance of the night in the 20th minute, but again, Bledsoe was there to make an easy save. Back and forth chances continued through the remainder of the first half with both sides getting looks on goal, though none quite too dangerous. The Spirit had the better of the chances as they out shot Portland 8-5 and had five corner kick opportunities through 45 minutes.

The first chance of the second half came five minutes in when Sinclair jumped on a ball inside the six yard box. Both Bledsoe and Church had to defend to knock that ball out wide for a corner kick as Sinclair tried to put it on net. A few minutes later, Banini was served a great square ball from Pugh on top of the 18, but her shot went directly to Eckerstrom who barely needed to move to make the save. With hopes to re-ignite the Spirit attack, Francisca Ordega, who leads the Spirit with three goals on the season, subbed on to replace Ashley Hatch in the 58th minute. For the Thorns, Australian international Ellie Carpenter replaced Midge Purce in the 64th minute.  Only five minutes after she subbed on, it was Carpenter who gave the Thorns a 1-0 lead after finishing a ball on the ground at the back post from Tobin Heath. With the goal, Carpenter became the youngest player to score in the NWSL at 18 years of age. Carpenter’s goal was all the Thorns needed to take three points back to Portland despite some late pressure by the Spirit to equalize.

The North Carolina Courage levelled the 2014 Seattle Reign’s record of 23 points from the opening nine games of an NWSL season after a comfortable 2–1 win over Sky Blue FC in New Jersey. Paul Riley’s side were fairly comfortable throughout as goals from Crystal Dunn and Sam Mewis handed the Courage their seventh win of the season. Carli Lloyd scored an absolute beauty in injury time of the second half, this after missing a penalty earlier in the second half.

The home side started the game well and had the best chance of the opening 15 minutes when Shea Groom forced Katelyn Rowland into a fine save following a drive from the corner of the box. But the Courage, who have kept five clean sheets in their unbeaten run, took the lead on 16 minutes when Crystal Dunn was able to slide the ball home from close range following a pinpoint cross from the right from striker partner, Jess McDonald.

The Courage took advantage of the half following their opener and doubled their lead just over ten minutes later, thanks to Sam Mewis’ first goal of the season. Dunn managed to find a bit of space in the box, and her ball across the six-yard line caused confusion in the Sky Blue defense, and Mewis was on hand at the back post to poke the ball into the net.

Sam Mewis adds a second for @TheNCCourage, poking this goal home at the post.#NJvNC | #NWSL pic.twitter.com/GXzObWojw5

North Carolina could and should have added a third just before half-time when Debinha got her lines wrong after she shot wide from close range, this following a save from keeper Kailen Sheridan after she parried a Mewis piledriver from 25 yards.

As the fog drifted in over the field in the second half, Sky Blue gave themselves a chance of clawing their way back into the match when Carli Lloyd won her side a penalty after a cleverly worked free-kick on 71 minutes, However, Rowland stood up big to deny Lloyd and then sub Raquel Rodriguez from the rebound to keep the New Jersey side out.

Lloyd made amends in injury time after blasting a free-kick into the top corner from 25 yards, but the goal came too late as the referee blew her whistle and the Courage extended their record to 7-0-2.

Perfect Placement™ by @CarliLloyd to pull one back for @SkyBlueFC in the final moments.#NJvNC | #NWSL pic.twitter.com/1JlNZOqxW3

The Courage travel to Orlando next Wednesday, while Sky Blue (0-5-1) travel to Washington that same day.

In the third consecutive game of the night with wet weather, neither Seattle nor Chicago could find the back of the during a classic goalkeeper’s duel.

Both sides made a few changes to their starting lineups. Seattle’s Lauren Barnes returned to the XI in place of the injured Megan Oyster, while for the Red Stars, Arin Gilliland dropped back into defense again and Alyssa Mautz started up top.

The first half began with Seattle taking the reins. Jodie Taylor beat Chicago’s backline in the 7th minute to get 1v1 with Alyssa Naeher, but she sent her shot straight to the keeper, who made a save with her feet, allowing her defenders to clean up the rebound. Seattle continued to run the show for much of the half, but they lacked the final pass or shot, broken up by Chicago over and over.

However, the Red Stars came very close to taking the lead as the first half drew to a close. Reign keeper Lydia Williams came up huge with a double save on a Chicago corner kick. Gilliland sent in a header at close range that Williams got one hand on before claiming the next shot as well.

The game evened out more in the second half. A tough midfield battle saw a slew of fouls and three yellow cards. The action began to be box to box, with each keeper coming up big for their team on multiple occasions. Megan Rapinoe had one of the best chances of the night when she attempted to replicate her goal from distance in the 68th minute, but Naeher was there to deny her, tipping it over the crossbar.

Unfortunately for both sides, a goal wasn’t meant to be, even though the Red Stars went so far as to send Naeher to take a free kick in Chicago’s attacking half in one of the last plays of the game, and each had to settle for a point apiece.

Seattle (4-1-2) are now unbeaten in four matches and retain second place. They travel to Houston next Wednesday. Chicago (2-2-6) fall to fifth place, winless in six games and currently on a three-game streak of draws. They will host Orlando next Saturday.