The Lowdown: Three positions being exposed on NWSL clubs 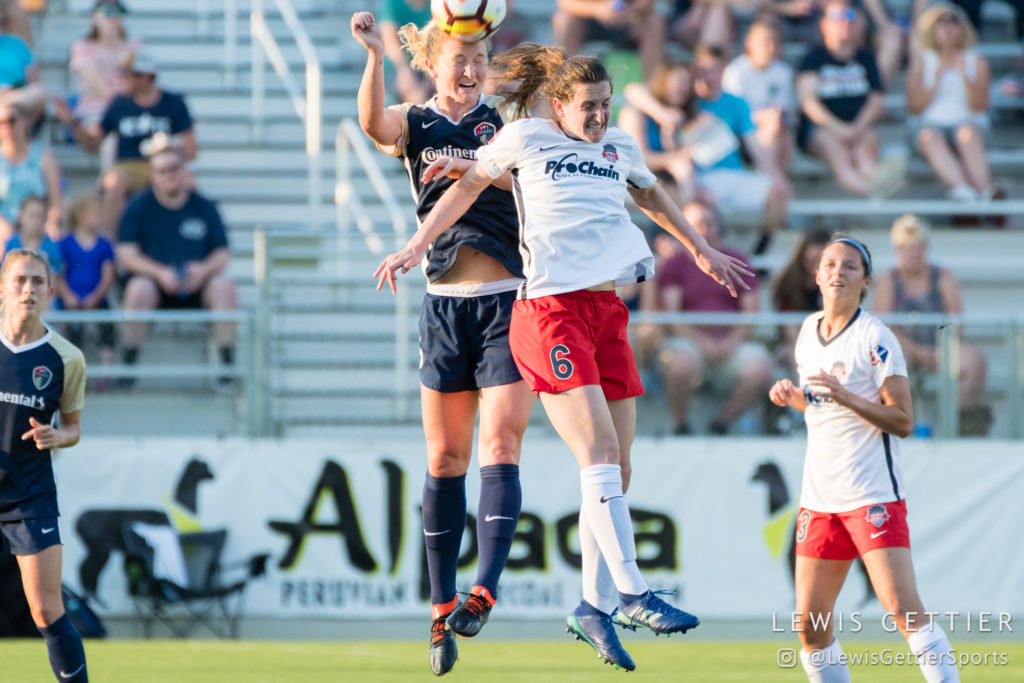 Here are three trouble spots I have noticed around NWSL so far this season:

Christina Gibbons was one of the top rookies in a deep class last season but her indoctrination to Sky Blue has been a bit rough. Last season Gibbons started as the left back in FC Kansas City before being switched into midfield where she blossomed. When Sky Blue acquired her in the Kelley O’Hara trade they had her targeted to replace O’Hara as a fullback. Gibbons is now on the right side.

The transition back to the defensive line has been a struggle. In the 3-2 loss to the Houston Dash, Gibbons was no match for Kealia Ohai on the occasions she got the ball. Dealing with Megan Rapinoe and Steph Catley in Seattle did not go much better.

Far better fullbacks than Christina Gibbons have been left in the dust by Ohai, But the right side of Sky Blue’s back line, where Erica Skroski has also struggled in a return to central defense. Meanwhile, Gibbons could be a midfield upgrade over Sarah Killion, another player who is off to a rough start to the season. Unfortunately, the current roster does not offer much depth at outside back. First round pick Amandine Pierre-Louis is projected there but has yet to play due to injury. Amanda Frisbie is working her way into fitness and could play there or push Rebekah Stott out wide.

Another wild idea is to see what Adriana Leon looks like back there. A dispersal draft pick from the Breakers where she enjoyed her best pro season, Leon has been buried on the bench so far in New Jersey. She’s not really a fullback but is a wide player and could add some bite to the attack from the back line.

How do the Spirit have such a loaded midfield in terms of both talent and personnel while at the same time rarely winning the battle in the middle of the park. Richard Farley and I discussed Andi Sullivan on this week’s podcast and Richard made the valid point that the jump from college to NWSL is widening. But Sullivan has thrived in a USWNT kit which in theory should make that jump a bit less daunting. Sullivan has not been poor by any means, but eight games in there have been precious few signs of her leaving an indelible imprint on any match.

The issue in Washington seems to be that what should be a good mix of youth and experience seems to trend too far in each direction. Veterans like Tori Huster and Joanna Lohman have not been able to contribute enough while Sullivan and Meggie Dougherty Howard have been in developmental quicksand.

The Spirit have only won five times in 31 matches since the 2016-2017 roster blowup. Much went right for the team this past offseason, but watching their midfield, and their inability to muster results leads to some skepticism. In their case the personnel for a quality midfield is there. They just need to figure out the best way to deploy it.

This one only applies in the long term if Adrianna Franch is not able to return and return to form over the next few weeks. Franch played every match for the Thorns from opening day 2017 until a sore knee took her out of the lineup at the end of April. She has since had surgery and is at least a few more weeks out.

Enter Britt Eckerstrom. The first goalkeeper selected in 2016—one spot ahead of Abby Smith—Eckerstrom played three matches for the Flash in 2016 but none in NWSL last season as Franch’s backup. Eckerstrom was a regular in Australia this winter, but her return to NWSL has made for a large dropoff in form from Franch.

If Franch returns and reclaims the spot with anything close to last season’s form then it’s no problem. If she does not the Thorns could struggle to prevent teams from scoring on Eckerstrom. And of course the Thorns’ defensive issues are not entirely on the goalkeeper. If Meghan Klingeberg returns this week and Emily Menges is able to answer the bell again, Mark Parsons may have his preferred back line (Katherine Reynolds and Emily Sonnett being the others) in place for the first time in 2018. Perhaps that will be the key to making Eckerstrom more comfortable.

The Dash hired Eddie Robinson as an assistant coach last week and the move drew harsh criticism on a number of levels. There was the standard complaint that a male with zero experience in the women’s game was given a job at the expense of what would appear to be a cadre of qualified women. But this one got a bit more hairy with the unearthing of Robinson’s social media habits.

We’ll leave the gender issue on the backburner today for two reasons. One is that Dash coach Vera Pauw told reporters in Chicago over the weekend that she was unable to find a qualified female able to take the job (the fact that the club has not commented on or even announced the departure of Robinson’s predecessor Lisa Cole is another story altogether.) Two is that this is an age-old issue that is going to come up again. That is not meant to dismiss it, just to focus on the other angle here.

LISTEN to Episode 9 of the Equalizer Podcast!

That leaves us with Robinson’s social media history which is decidedly conservative and arguably radical. There is nothing wrong with being conservative, but within the bounds of women’s soccer it is roughly the equivalent of walking into a room where everyone is speaking a language that you don’t speak. But Robinson has appeared to have aligned himself with a series of ideals that are uncomfortable in their extremism.

So do Robinson’s political views go too far? How much are we to judge a person by which tweets they like? What about the fact Robinson was less than complimentary via social media after Rachel Daly collapsed of heat exhaustion last May? If we decide these transgressions are too much for employment by the Dash or within NWSL, where is a suitable place for Eddie Robinson to work? Are we just tossing him aside from WoSo and leaving someone else to handle it? Or should extreme views be the pathway for a life of destitute and unemployment?

Professional sports teams are different though. They are public reflections of their cities and should hold themselves to higher standards. Does that mean the Dash should not have hired Eddie Robinson? For a variety of reasons, it probably does.

On Monday morning I asked the Dash if I could speak to Eddie Robinson. I wanted to give him a chance to speak for himself rather than allow me, and so many others, to pontificate on what he does and does not think and where that thinking falls within the realm of the Dash, NWSL, and WoSo at large. After being asked for a timeline, to which I responded, communication with the club stopped. That in itself tells me there is something to hide.

— Last week I said the overall numbers looked good and was taken to task for it by many of you. Keep in mind that having league attendance up can lead to sponsors and other benefits. But yes there are problem areas. The Red Stars are up thanks to a doubleheader with the Fire but their standalone matches are averaging 2,285 which is 28.6% off last season’s average that included no doubleheaders. It has been unseasonably cold in Chicago, but at some point that has to stop mattering. As for the Dash, who drew a BBVA Compass Stadium low 2,665 on Wednesday night, they are perilously close to becoming the poster child for why MLS teams may not want to jump into the NWSL fray.

— Count me as part of a small minority that hopes VAR (Video Assistance Referee) never makes its way to NWSL. Never mind that it impedes the flow of a match and is the start of watching every box challenge knowing the call on the field won’t matter. My bigger reason for not wanting VAR is that it solves little. During a recent MLS match a player was sent off for DOGSO after a video review. Within five minutes two prominent and well respected journalists took to Twitter with differing opinions as to whether it should have been a red card. In other words even the benefit of a replay rarely brings everyone to any sort of consensus.

— Sticking with referees it is rare to see a head coach get a talking to from the center referee during play, but that is exactly what Mark Parsons got during the first half of the Thorns loss to Orlando on Saturday. Meanwhile his postgame remarks about NWSL being a training ground for referees is not entirely inaccurate, but I don’t really see the benefit in verbalizing that.

Parsons: The NWSL is treated as a training ground for referees. These players are elite talent and we want to see the highest quality experienced referees made available so we can have the best product on the field. #BAONPDX

— I think I like Arin Gilliland playing higher for the Red Stars. Credit Rory Dames for developing enough defenders to make it possible, and of course Gilliland needs to score and/or create goals, but I think a Gilliland-Sam Kerr-Sofia Huerta top three could work.

— It got limited attention because Alex Morgan wound up playing three days later, but Katrina Gorry’s challenge during Wednesday’s match was just hideous. If you missed it, Gorry took Morgan out with a tackle from behind while yanking on the back of her jersey. Not good.

— The obnoxious practice of players putting their hands up to call for offside or other fouls is getting out of control. There are some players who literally put their hands up every time.

— It looks like money has finally been refunded to Breakers season ticket holders. Way too late, but glad that saga has come to an end.