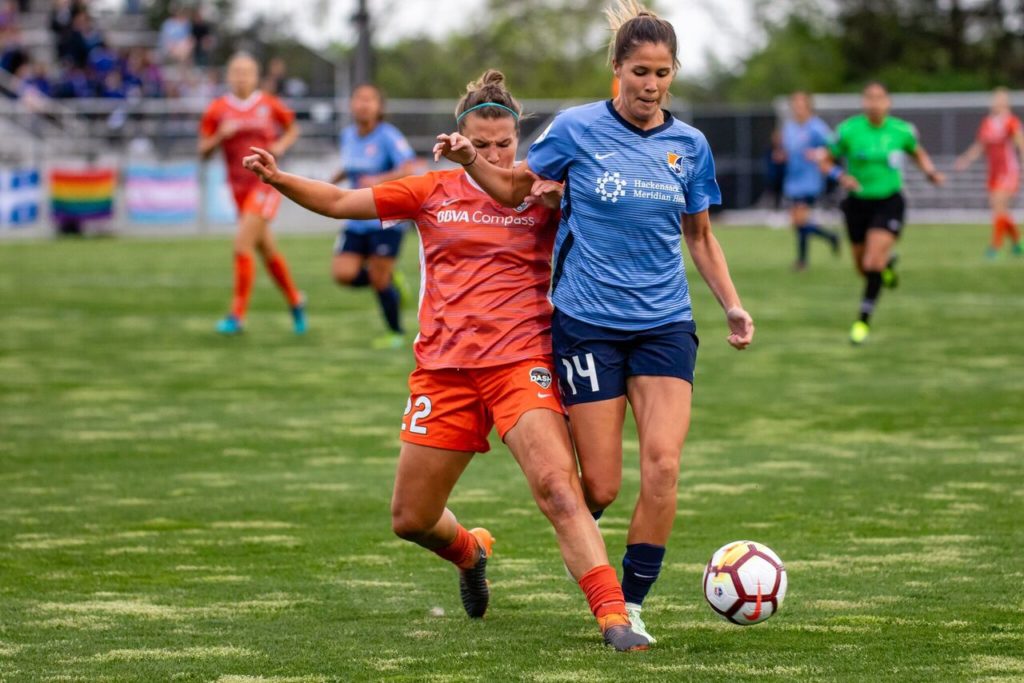 The Houston Dash and Utah Royals collected their first wins of the season over the weekend, leaving Sky Blue — who twice equalized against the Dash only to lose 3-2 on their home field — as the final NWSL team this season without a victory. All three developments were significant.

The Royals prevailed on the heels of their top players who appear to be rounding into good form and health. The Dash appeared to be on the verge of completely imploding before Memorial Day for the second year in a row. And Sky Blue find themselves chasing the table after a particularly frustrating loss in front of a small and ambivalent home crowd.

In Houston, there had been a running joke that, at least before Kealia Ohai returned, that the team’s two best attackers were playing outside back. Saturday night, coach Vera Pauw pulled Rachel Daly and Kristie Mewis into higher positions, even if Mewis as the defensive midfielder next to Haley Hanson wasn’t exactly in an attacking role.

“It was a huge gamble because we also knew that could bring us into problems,” Pauw said, adding that she made the moves because the team needed more forward pressure.

PODCAST: Dan and Richard on Cascadia, Naeher, and the rest of Week 6

The new outside backs were Lindsay Agnew on the right and rookie Kimberly Keever on the left. “Kimberly Keever was not initially drafted for left fullback; [she] was just a rookie and not ready. We have now thrown her into the depth.”

Keever did get beat by Shea Groom, which led to Groom assisting on Sky Blue’s first goal, but for the most part she held her own and the overall result was that the Dash scored three times after having one goal total over their first give games. Daly scored one — not her prettiest or most memorable, but a goal nonetheless — when Kailen Sheridan tipped her cross into the goal. Mewis and Hanson were solid sitting on top of the back line.

“The changes we made moving Kristie to midfield and Rachel up top just gave us some more options in the offensive third,” said defender Amber Brooks, who had a remarkable recovery run to block a Katie Johnson shot early in the second half.

The win came following a week where many were speculating whether the Dash would win at all this season. A week earlier in North Carolina, they were absolutely pulverized by the Courage. The final was 2-0, but Brooks admitted it could have been a whole lot worse. She also said the Dash followed up that drubbing with their best week of the season.

“Honestly it was a great week of practice,” Brooks said. “I’m not sure if it was the two moves and just having that confidence in those types of players of players further up, but we really got after it. It was honestly the best week of practice we’ve had, so it was good leading up to this game.”

Over in Utah, the Royals took a lead for the third consecutive match, and this time were able to double it and earn their first win ever. Diana Matheson was the star of the show with a pair of brilliant defensive tackles that led directly to the two goals.

“Both goals coming off good defending is what I love the most,” Royals coach Laura Harvey said after opening her press conference with something of a sigh of relief. “No one will ever tell me that there is no better goal than doing it off defending so with both of those goals coming off those, super pleasing to me.”

While the Dash were 0-3-2 after five matches, the Royals at 0-1-4 had double the points, and it seemed like they were getting better while the Dash looked to be regressing. The Royals also remain the shiny, new object while the Dash are staring at five seasons out of five without a playoff game. It still meant a lot for the Royals to win.

“I think you can see from the players afterwards that it means a lot to get the first win, and I’m glad we were able to do it at home,” Harvey said.

Pauw admitted that the Dash had a heap of pressure lifted off them by finally winning. I was their first since August 16 in Boston. That was three months before the Royals were founded.

“Let’s be honest, it’s professional sports so you have to win,” Pauw said. “We had two draws and three defeats. We needed a win to go on with this program because otherwise the belief in the program drops of course. The players do believe in it. Every day they feel better. But if you don’t get points, there is a point that you cannot go with it.

Let me emphasize that it is most important for the fans; that the fans feel that we’re fighting for them, that we’re there for them, and that we’re every day working to get better.”

Sky Blue is another team looking at five straight seasons of no playoffs. They did get there in 2013, but that was a long time ago and there has been 100 percent roster and coaching turnover. Scheduling quirks mean the New Jersey side has played only four games — still less than the Dash and Royals before they broke through. But a lack of games does not make it fewer days since the season began, and with their next two matches against the top two teams on the table — away to Seattle and then home to the Courage — it is already time to start counting points.

“We’re eager to play games so I think it’s been kind of tough personally,” Sky Blue forward Katie Johnson said after bagging her first two goals of the season. “We’ve played against some boys’ teams on the off weekends and I think we play out best soccer against boys for whatever reason. We ping the ball really well. If we can bring that more into the game and just relax and know that it’s not just pressure, pressure, pressure, we’ll be a little better.”

WATKINS: A Cascadia Derby worthy of the epic atmosphere at Providence Park

At least there were goals, and both good ones. The better of the two came through through Carli Lloyd, who played a switching ball to Groom allowing her to beat Keever and cross for Johnson. The other goal was a designed play off a short corner.

Sky Blue need more than goals though. They need wins.

Lloyd did say that while the results have not been there, the attention and devotion to coach Denise Reddy’s style of building out of the back through possession-based buildup has been there.

“For the most part we did,” Lloyd said. “When we stick to that everybody’s kind of on the same game plan, everybody knows what everyone is thinking.

— The overall attendance numbers are good which is not surprising when you consider two things. In three games the Royals already have about 60% more fans through the gate than the team they replaced, FC Kansas City, did in 12 games last season. And the Breakers who left the league, ran about 43% off the league average.

— Speaking of the Breakers, it appears the season ticket holder refund fiasco lives on. It has now been longer since NWSL hired an outside firm to handle it than it took for most FC Kansas City deposits to be refunded in full from the day the team folded.

— It came to light last Friday that Abby Dahlkemper had received a public warning from USADA (United States Anti-Doping Agency) for using acne medicine that contained a banned substance. She was not suspended for the violation, but she did elect to sit out the Courage win over the Reign on April 18 in an effort to “respect the process.” By the weekend she had received a Therapeutic Use Exemption (TUE) and was back on the pitch.

— Alyssa Naeher’s remarkable afternoon in goal saw her credited with 12 saves, which is a career high and club record. However it was Naeher’s fourth NWSL match recording double-digit saves, which is the most all-time. Kelsey Wys has three. The league record for saves in a game is 14 by Nicole Barnhart.

— The Red Stars became the last team other than the Royals (the Courage did it as the Flash) to have a keeper make 10 saves in a game. They are also the only team to have never had a hat trick or thee-assist game. Ironically, the first WPS hat trick was scored by Cristiane as a member of the Red Stars.

— This is primarily an NWSL column, but kudos to the 51,211 who showed up in Monterrey for the final match of the Liga MX Femenil season. Also to the 45,423 on hand at Wembley Stadium for the FA Cup final. Those are the two largest crowds ever to watch standalone women’s club soccer.

—  The 2018 NWSL Championship won’t approach those numbers but I don’t see any reason why Providence Park shouldn’t sell out at a capacity of 21,144. Tickets go on sale June 7 (June 5 for Thorns season ticket holders) which is more than three months before the match on September 22. I would still like to see a bit more buzz generated, but let’s give it some time.

— Comparisons to the Thorns and Providence Park are often fruitless, but when the crowd there is literally louder on my stream than it was sitting outside at Yurcak Field, that represents a problem. Bad weather games aside, Saturday may have been the worst atmosphere at Yurcak since a July 4 match in WPS.

— Kealia Ohai showed a few signs of her old, explosive self on Saturday. The Dash probably didn’t give her the ball enough, but it was nice to see her start looking like her old self.

— Midge Purce does not like having the ball on her left foot.

— Jim Gabarra and Mark Parsons became the first two coaches to coach 50 games for two different NWSL franchises. Gabarra was at Sky Blue for three seasons and Parsons with the Spirit for most of three seasons before Parsons jumped ship to the Thorns ahead of the 2016 season. That opened the Spirit job for Gabarra to take. Gabarra also coached 63 regular-season games for the Washington Freedom in WUSA, 44 more for that club in WPS, and 18 more for Sky Blue in WPS.

NWSL Week In Review: What has happened to the goalkeeping?
Tuesday Roundup: New Zealand reaches parity in new CBA