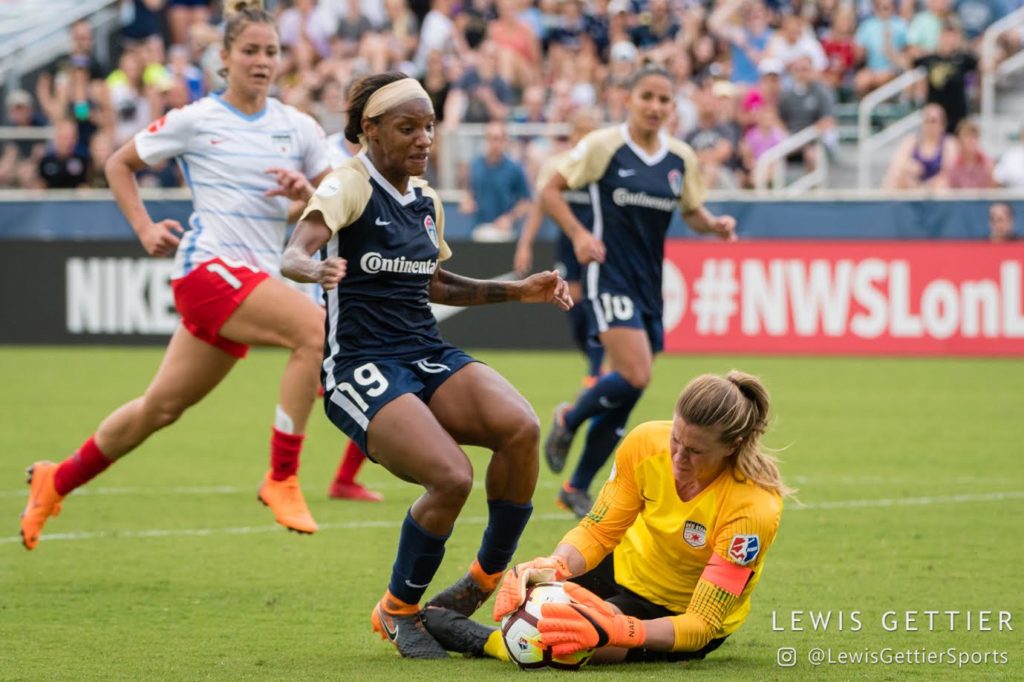 In a match that put up big stats and low scores, the Chicago Red Stars and North Carolina Courage finished out a wild NWSL Week 6 with each taking a point in an oft-lopsided, occasionally jaw-dropping game.

With the Red Stars coming off a midweek match, head coach Rory Dames made wholesale changes to his starting lineup, and with only two true defenders on the field for Chicago to start the game, it was always going to be interesting. North Carolina quickly asserted themselves, all but parking inside Chicago’s defensive half. They earned their first corner in the 8th minute, and Chicago goalkeeper Alyssa Naeher made the first of several big saves of the night in the 17th, getting just fingertips on a shot by Crystal Dunn to preserve the blank scoreboard.

As the Courage won the midfield battle with ease, forcing turnovers and winning nearly every second ball, Naeher was kept extremely busy, helped most notably by Sarah Gorden, who went step for step with Lynn Williams all day. It appeared a goal was inevitable, and indeed it was, just not from the expected source.

In the 37th minute, Alyssa Mautz, playing at right back, served the ball ahead for Sam Kerr, who was hanging off Abby Dahlkemper’s shoulder. Heading away from goal, Kerr launched a low, right-footed shot toward the far post. Courage goalkeeper Sabrina D’Angelo was cheating toward her left and was unable to get to it in time, allowing Kerr to score her first goal in a Red Stars uniform, completely against the momentum of play.

The Courage picked up where they had left off, peppering the Red Stars box with shots, but after a pair of yellow cards, one for each side, they headed into the locker room down by one.

Although the Red Stars began to see a little bit more possession in the second half, much of the last 45 minutes passed similarly to the first. Naeher continued to play the game of her life, with two more big saves against Dunn and another against McCall Zerboni, among others. She ended the match with 12 saves, several of them stunners.

In what was a physical match that probably saw a couple missed calls or cards, including a potential game-changer on Jaelene Hinkle when she shoulder-checked Michelle Vasconcelos just outside the Courage box and a possible penalty for the Courage very late in the game, each side picked up another yellow card around the 72nd minute.

Ten minutes later, Abby Erceg brought down a corner kick just beyond the far post and chipped it back in for a wide open Zerboni, who went for the one-time half volley with her left foot to finally slip one past Naeher.

Not content to leave with a point, Kerr tried her luck again a few minutes later. What looked like almost a sure thing for the open Kerr was blocked in midair by D’Angelo with a kick save, although D’Angelo came up limping. Each side had to settle for a point at the final whistle. The Courage ended up with an astonishing 42 shots in this match – for perspective, they entered the game with 75 through six games, leading the league. Next were the Red Stars with 57 in seven games. They finished the match with 8 shots. The more important number is that out of those 42 shots, only 14 were on target, and only one went in.

The Courage maintain first place and host Washington next Saturday. The Red Stars are in third and play Houston for the third time this season on Saturday.

Watkins: An electric atmosphere in Portland, and a game to match
The Equalizer Podcast, Episode 8: Shots, shots, shots!