Also in today’s roundup, NWSL announces April Team of the Month and Florida State to take on PSG during European excursion.

Candace Chapman, here playing for the Western New York Flash in 2011, was named to Canada Soccer’s Hall of Fame Class of 2018. (photo copyright Patti Giobetti for The Equalizer)

Canada Soccer announced on Thursday that former national team star Candace Chapman had been named to its Hall of Fame Class of 2018. Her induction will be celebrated ahead of a national team match later this year.

Chapman made 114 appearances for Canada from 2002-2012, alternating between the team’s midfield and center back spots. She won gold in the Concacaf championship in 2010 and an Olympic bronze medal in 2012. She played in two World Cups, two Olympic Games, and five Concacaf tournaments with Canada.

“I am incredibly humbled and honoured to be inducted into the Canada Soccer Hall of Fame…as part of the Class of 2018,” Chapman said in Canada’s official announcement. “It is quite remarkable for me to think of the incredible women with whom I now share this honor: they were pioneers of the game and some fantastic teammates and friends of mine who have laid the foundation for the Women’s national team program.”

She played collegiately at Notre Dame, helping the Fighting Irish win their second national championship in 2004. At the club level, Chapman played for the Boston Breakers in Women’s Professional Soccer (WPS) before winning the WPS title two years in a row, first with FC Gold Pride in 2010, followed by the Western New York Flash in 2011. She finished out her professional career in 2013 with the Washington Spirit.

NWSL Team of the Month for April named

It’s the #NWSL Team of the Month for April, brought to you by Cutter. pic.twitter.com/fqDpFEHI55

On Thursday, the NWSL announced the 11 players named to its April Team of the Month, as voted on by members of the NWSL Media Association.

Unsurprisingly, Sofia Huerta, announced yesterday as the April Player of the Month, was one of three midfielders named. She was the lone Chicago Red Star named to the squad, while the North Carolina Courage and Washington Spirit each had four players selected. The Portland Thorns and Utah Royals were the other two teams represented.

Defender Becky Sauerbrunn also graced the Team of the Month for a second consecutive month, increasing her total appearances on the monthly best XI to five since the accolade was established at the start of the 2017 season. Her five Team of the Month honors is a new league high.

Four players—Huerta, goalkeeper Aubrey Bledsoe, and forwards Jessica McDonald and Francisca Ordega—were all making their first appearances on the NWSL Team of the Month. 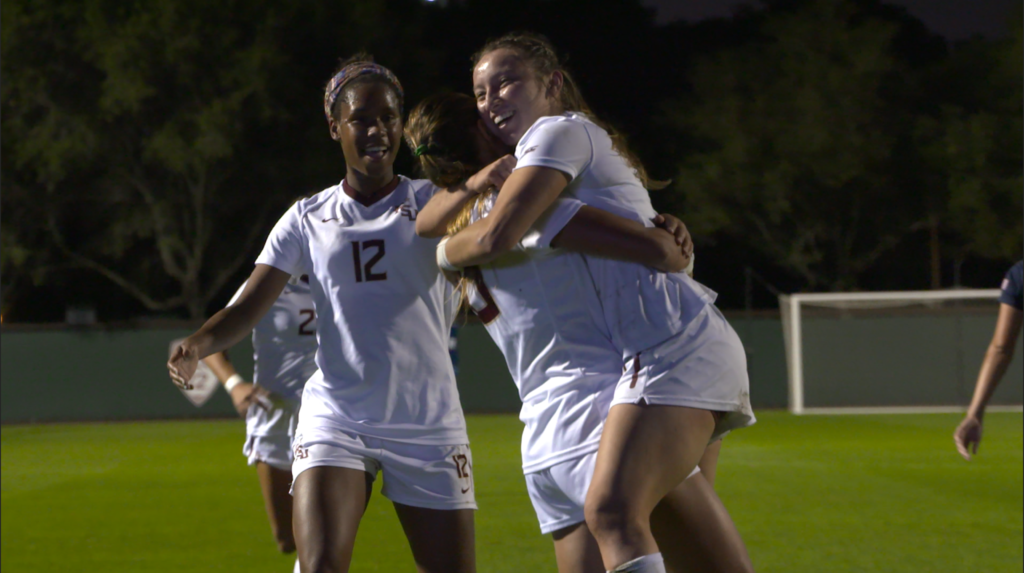 Florida State will be embarking upon an 11-day European Tour during which they’ll take on Paris Saint-Germain. (photo courtesy FSU Athletics)

The Florida State Seminoles are headed to Europe for an 11-day, three-country tour during which they will play three matches against local club teams. The trip culminates with a friendly against Paris Saint-Germain on May 14.

“We are all really excited for the opportunity to take the team to Europe,” FSU head coach Mark Krikorian said in the team’s press release. “Being able to visit three different countries and play three games against clubs in each of those countries will be a tremendous experience for everyone involved.”

The Seminoles, who finished out 2017 in the Top 15, will open up their European play on May 8 against ADO Den Haag in Amsterdam, followed by Ghent in Belgium on May 10. The will then close our their European Tour with the match against Division 1 Feminine powerhouse Paris Saint-Germain on May 14 before flying back stateside on the 15th.