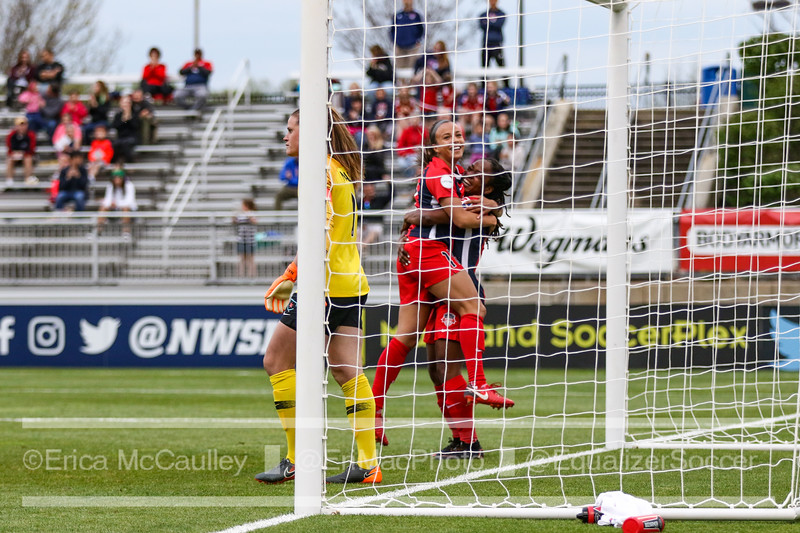 A pair of comeback goals highlighted an exciting, end to end match at Rio Tinto Stadium. Royals head coach Laura Harvey made several changes to her starting lineup, returning Elise Thorsnes and Diana Matheson while moving Kelley O’Hara to a more advanced position. Amy Rodriguez got her first start for the Royals as well. The moves appeared to pay off as Utah came out with their most attacking game yet. Portland responded in kind, and each side had chances, if not incredibly dangerous ones, early on. Royals defender Becky Sauerbrunn put in a tremendous effort in the first half to keep it scoreless.

It didn’t take long for that to change in the second half. In the 53rd minute, defender Kelli Hubly collected a long ball, but a poor touch allowed Rodriguez to pick her pocket and break free. She had plenty of space in which to work, especially after goalkeeper Britt Eckerstrom collided with Hubly, making it easy for Rodriguez to send it past the Meghan Klingenberg. This was Rodriguez’ first goal since scoring in and subsequently tearing her ACL in the 2017 season opener in Kansas City, her first game back after missing 2016 to have her second child. This was also the Royals’ first-ever goal in their home stadium.

Not to be outdone, Tobin Heath subbed in just minutes later, and in the 67th minute, Christine Sinclair stole the ball from Desiree Scott in the Thorns’ attacking half, passing it forward to Heath. She split the defenders and chipped an oncoming Abby Smith to tie up the game. This was Heath’s second appearance after last year’s injury.

Meghan Klingenberg denied Elise Thorsnes what would have been a sure second goal for the Royals just before Heath tied it up, but in doing so she appeared to get injured and had to be subbed off. The end to end match began to take its toll on both teams, and although they continued to try to find a way to break down the other side, the pace of the game was noticeably slower in the last 15 minutes and they had to settle for a draw, the third 1-1 draw of the day.

Portland (2-1-2) stays in third place and will host rival Seattle next weekend. Utah (0-1-4) is in seventh place and hosts the Washington Spirit next Saturday.

For the second time this year, Marta saved a point at home for the Pride. (photo by Mark Thor, courtesy of Orlando Pride)

Allie Long started off the scoring, but – who else – Marta rescued a point for the Pride at home. With Marta, Monica, and Alanna Kennedy slotting straight into the starting lineup, Orlando started off the first half on the first foot. Although Kennedy appeared just a touch out of step with her teammates, the Pride midfield was much improved, with more possession and less turnovers. The Reign, who left Lydia Williams on the bench but started Steph Catley, as well as Nahomi Kawasumi and Rumi Utsugi, struggled with the Pride pressure, and it looked like only a matter of time before the Pride got a solid shot on goal to get past Michelle Betos.

Enter Long. In the 33rd minute, Kawasumi sent in a free kick that Ashlyn Harris punched up but not out. Several Pride players were unable to properly clear, and a recycled ball was headed back into the box by Megan Oyster. Long controlled the ball, stepped away from her defender, and shot across her body to put it out of reach of Harris. Against the momentum of the game, the Reign were leading the game.

With the goal, Seattle began to play with more confidence, often aiming for Jodie Taylor. A combination of hard work from Harris and Shelina Zadorsky denied Taylor the opportunity to double Seattle’s lead despite several good chances, and they started off the second half up by one. Australian midfielder Emily Van Egmond made her Pride debut in the 46th minute. The Pride tried to get back into the game, and in the 61st minute, they did. Marta stepped up to take a free kick with her left foot and sent it directly to the near upper 90 past a diving Betos, equalizing the game.

Marta's having a DAY at the office, with this beauty of a free kick. All tied up in Orlando.#ORLvSEA | #NWSL | @go90sports pic.twitter.com/mtghl4hcK2

With the tying goal, the game really began to open up. Pride head coach Tom Sermanni made a tactical change into a three-back defensive formation, subbing on forward Rachel Hill for defender Toni Pressley, while the Reign were more content to settle for point on the road, as evidenced by Betos’ yellow card for time wasting in the 89th minute. The match was physical without being overly aggressive, and Kennedy and Jess Fishlock were a particular match up to watch as the former Melbourne City teammates battled it out in center of the park. Unfortunately, Fishlock got the worst of it when she had to be subbed off in the 57th minute after getting tangled with Kennedy and landing awkwardly.

The match ended in a 1-1 draw with neither side able to find the go-ahead goal. Orlando (1-2-2) are in sixth place and will travel to Chicago next Wednesday for a midweek game before having a bye over the weekend. Seattle (2-2-1) are in fourth place and travel to Portland next Saturday for the first Cascadia rivalry of the season.

The Red Stars unveiled Sam Kerr, got Julie Ertz on the pitch for the first time this season, and generally controlled the tempo of the match, but in the end had to settle for a 1-1 draw away to the Washington Spirit. The hosts went ahead early through Francisca Ordega before Alyssa Mautz equalized in the 20th minute. That would be all the scoring on the evening although it took one world-class save from Aubrey Bledsoe to make that so.

The Spirit began the match on the front foot and went ahead in the 4th minute. Winning the ball off a throw-in they cycled it back to their centerbacks and Estelle Johnson launched a direct ball over the midfield where Mallory Pugh ran it down into the right corner. Pugh’s cross slipped through the box and beyond Ashley Hatch and Ordega swooped in at the far post to knock it in despite the best efforts of Katie Naughton.

The Red Stars equalized in the 20th after Kerr drew several defenders to her left and the play moved to the right. That’s where Taylor Comeau hit a long-distance shot that Bledsoe came out—with Kerr in her grill—to parry away. But it went straight to Mautz who delivered the finish.

Bledsoe would be instrumental in keeping the match 1-1. Danielle Colaprico hit a 41st minute corner kick to the far post and Sam Johnson got a head on it and put it back to the near post where it seemed no one was stationed. Bledsoe was able to get enough momentum to fully stretch out and get a hand to it while at the same time getting a bloody lip colliding with teammate Caprice Dydasco.

The second half saw the return of Julie Ertz who played the final 17 minutes plus stoppage time in her first action since the SheBelieves Cup, but no goals were to be found. It was the second straight draw for both teams.

The Red Stars (2-1-3, 9 pts) are now unbeaten in four and have a Wednesday home match against the Pride and a Sunday trip to North Carolina next week. The Spirit (1-2-2, 5 pts) are in Utah next Saturday. 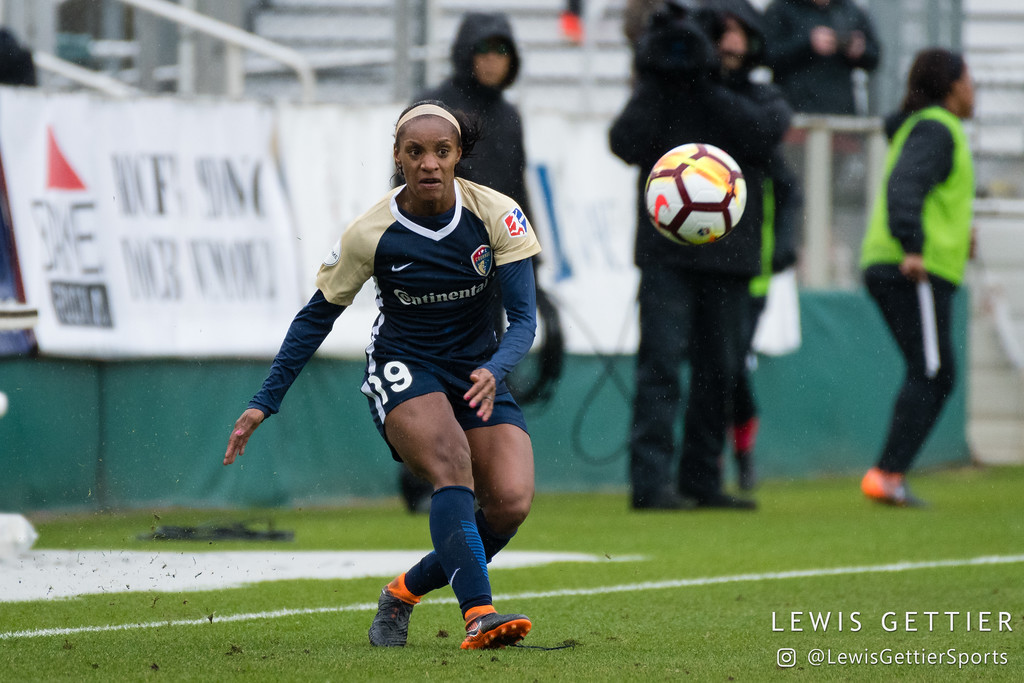 Dunn’s goal in the third minute was the game winner in the Courage’s 2-0 road win on Saturday. (photo copyright Lewis Gettier)

The North Carolina Courage remain undefeated after a 2-0 win on the road against the Houston Dash. The Courage opened each half with early goals to secure the win, while Sabrina D’Angelo was credited with three saves to secure a league-high fourth shutout on the year.

Both teams had their internationals back, including Debinha’s return for the Courage—which came in the second half when she subbed into the match alongside Sam Mewis—and Kyah Simon starting in her Dash debut. Kealia Ohai, who returned to the field post ACL-tear for Houston near the hour mark of last weekend’s 1-0 loss in Orlando, also made her first start of the year for the Dash.

Even with Ohai and Simon in the Dash lineup, the attacking momentum almost entirely belonged to the Courage, who fired off 27 shots (compared to the Dash’s 8), 10 of which were taken in the opening 20 minutes.

One of the most potent shots came in the third minute, when North Carolina took an early lead by way of Crystal Dunn. The goal-scoring play originated with a Jessica McDonald long throw in, which went bouncing in the box after Lynn Williams was unable to get a touch on it. Dunn beat her mark to get to the loose ball and half volleyed it past Jane Campbell to score the game’s opening goal.

As was the case in the first half, the Courage scored in the opening minutes of the second half off a set piece, this time courtesy of Kristen Hamilton off an Abby Dahlkemper corner. Dahlkemper’s original ball in was ineffective, but after a few seconds, was found at the feet of Hamilton, who blasted a hard shot from distance that sailed just out of reach of the diving Campbell to double the Courage’s lead.

Although Campbell finished the day with five saves, it was the three saves by Sabrina D’Angelo that helped earn three more points for the Courage, further securing their place at the top of the NWSL table. The Dash, in comparison, have yet to find their first win of the season and remain next to last in league standings.

The Houston Dash (0-3-2, 2 points) will next take the field on Saturday, May 5 when they hit the road to take on Sky Blue. The North Carolina Courage (5-0-1, 16 points) return home to Cary, where they will face the Chicago Red Stars on Sunday, May 6.

Three tweaks to get Washington into the NWSL postseason
Lauletta: Kerr’s debut, Sullivan’s progress, and the Ertz/Colaprico dilemma