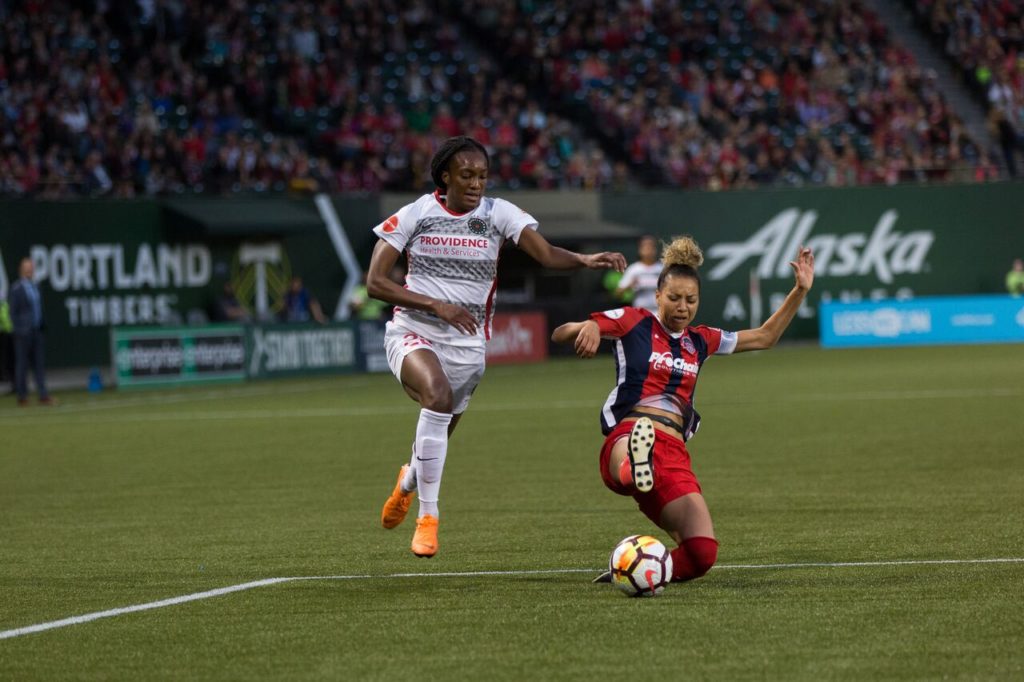 With two penalty kicks, at least one bloody nose, a couple of yellow cards, and the return of a fan favorite, Friday night’s match of Portland versus Washington had a little bit of everything – except a winner.

Britt Eckerstrom played her first NWSL game since 2016 and her first ever for the Thorns, replacing Adrianna French in goal as Franch is out with an injury. Meghan Klingenberg was also a late scratch despite not appearing on the injury report.

Washington got off to a strong start, dominating the midfield and forcing the Thorns into mistakes under pressure. A bizarre sequence about 25 minutes in nearly led to an opening goal for the Spirit as the ball ping-ponged around the box and appeared to at least touch the line, if not completely cross it, but no goal was given.

The actual opening goal, ten minutes later, was just as messy. Tori Huster sent in a corner kick that went straight to Ifeoma Onumonu at the near post. The forward tried to clear the ball but ended up sending it up and over her head closer toward her own goal. As players jostled for position, it appeared Lindsey Horan may have knocked Francisca Ordega into Eckerstrom, who bobbled and dropped the ball as a result. On the ground, Ordega managed to poke it past both Horan and Christine Sinclair for a goal.

The game’s first yellow card was issued just minutes later to Emily Sonnett for a tough tackle, the first of only two for the night despite an increasingly messy game that saw four players receive treatment, although no one had to leave the game.

Portland tied it up in first half stoppage time. Onumonu was tripped up inside the box by Caprice Dydasco, and a penalty was awarded. Sinclair stepped up to the spot and sent Aubrey Bledsoe the wrong way, scoring her 35th NWSL goal, which ties her for third all-time in the league.

.@sincy12 converts from the spot to send @ThornsFC into the break all evened up with the @WashSpirit.#PORvWAS | #NWSL | @go90Sports pic.twitter.com/WZlx6UGsdj

The tide began to turn in the second half. Ana-Maria Crnogorcevic subbed in for Tyler Lussi, adding pace and a nose for goal to the Thorns’ attack. Several times she appeared to be close to her first NWSL goal but couldn’t quite find the mark. With renewed pressure from Portland, the Spirit began to look gassed and turn over the ball.

Probably the biggest story of the night occurred in the 60th minute, when Tobin Heath subbed on for Onumonu. This is Heath’s first game since the NWSL Championship last year after missing nearly all the 2017 season.

Just minutes later, Sinclair collided painfully with her own keeper and stayed down for a long moment before jogging off on her own after play stopped. Although she was moving gingerly at first, she reentered the game and played to the end.

The Thorns moved closer and closer to a go-ahead goal as the minutes ticked away, seeing more of the ball and keeping play in their attacking half for long stretches, forcing the Spirit into last-ditch defending.

They didn’t get a better chance than the one in the 86th minute when Bledsoe and Sonnett collided in the box. Bledsoe did not get the ball, but although she was not carded, a penalty was awarded. Horan stepped up, and after a stop-restart stutter step, sent in a low ball that Bledsoe saved. The ensuing rebound went off the crossbar, and the game stayed knotted at 1-1.

.@AubreyBledsoe comes up big with the stop on Horan's PK. Is there a stoppage time winner in this one?#PORvWAS | #NWSL | @go90Sports pic.twitter.com/eSz5rgBDbL

Which is where it ended despite four minutes of stoppage time. Portland improves to 2-1-1, moving into second place for the time being. They travel to Utah a week from tomorrow. Washington holds steady in fifth place at 1-2-1, and they will host Chicago next Saturday.