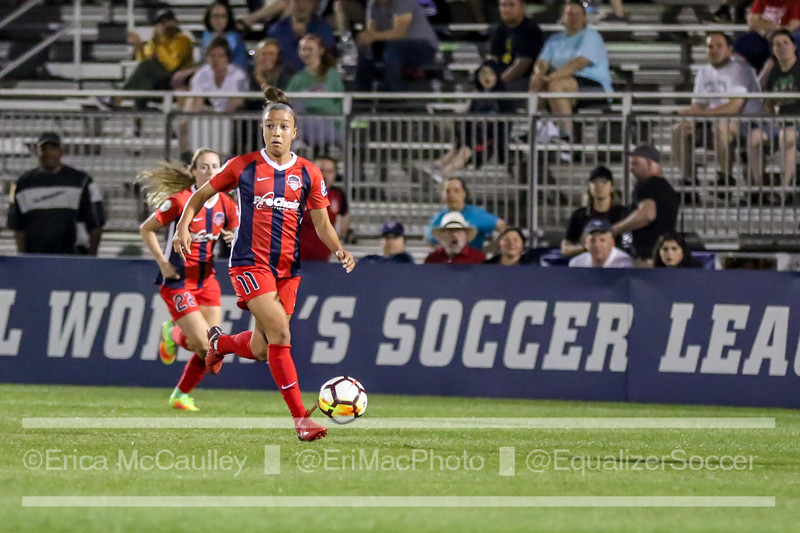 A month ago, the North Carolina Courage dominated the Washington Spirit 3-0 in each teams’ last tune-up before the regular season. Last Saturday was, of course, a different affair, despite the end result being the same. In the most recent meeting, the Spirit got off to a quick start and forced the Courage to concede its first goal of the year. Washington’s success was short-lived, however, as North Carolina would score two goals to close the first half and take a lead they never relinquished.

Washington’s quick strike was the product of a tactical change made by head coach Jim Gabarra. Mallory Pugh, who in both matches prior to Saturday’s contest occupied a position on the forward line, dropped back to play in midfield. After the game, both Crystal Dunn — who registered a goal and an assist in the game — and head coach Paul Riley admitted the changes threw them off a bit.

“I think that was the reason for the first goal for me,” Riley said postgame about the home side’s tactical adjustments. “They caught us a little bit unaware. Jimmy did it in the final as well with the back three and it kinda threw us off in the final … We saw Mal get into that space on the weak side and that was big. Those were issues we addressed at halftime and I think we did a better job second half of getting hold of Mal and getting hold of [Andi] Sullivan.”

Few players have been as dangerous and deadly in space as Pugh so far this season. Overloading the one side of a defense with Francisca Ordega and Pugh certainly presents a challenge for any defense. Washington’s offense has been its most potent this season with Pugh on the ball facing up her opponents.

“Putting Mal in midfield was simply to get her on the ball more and exploit the spaces and the opportunities to create chances against Carolina’s shape and their system,” Gabarra said about the switch.  “I thought it worked very well.”

Despite the loss, Pugh staying in this position could pay dividends for the Spirit in the long term. It’s easy to imagine the options and wrinkles the team will be able to use to go through opponents. Deploying Pugh there, however, may make it difficult for the midfield-heavy team to deploy its best personnel. This difficulty will increase when Rose Lavelle is ready to go. (Lavelle will miss Friday’s match against Portland despite the Spirit being “optimistic” that she would be available.)

While the move worked initially, the game quickly became a frantic, end-to-end affair, a less than ideal type of match for a team like Washington, which tends to get caught out of shape defensively and leave too many gaps. These spaces were easily exploited by a team with the pace of the Courage.

No matter what alignment the Spirit proceed with in midfield, the team can only go so far without resolving the issues on the backline that predate much of the staff and personnel’s arrival. Three weeks in, the Spirit seems no closer to resolving this conundrum. That remains the big issue.

As for Pugh, the 19-year-old is showing versatility, another wrinkle in her maturing game.