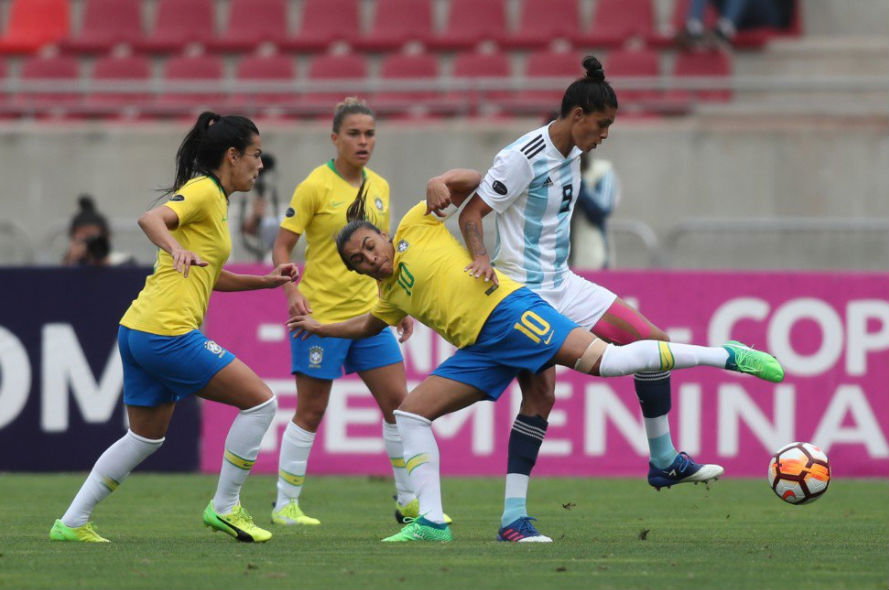 Brazil officially clinched a spot in the 2019 World Cup in France with their 3-0 shutout of Argentina on Thursday in the Copa America Feminina.

The entire first half remain deadlocked, but Cristiane’s goal in the 47th minute opened up scoring for the reigning Copa America champions, who would go on to put away a total of three unanswered goals to finish out the match.

Cristiane got on the board in the opening minutes of the second half when Marta danced around a number of defenders just outside the near side of the box before sending in a long cross that bounced past the keeper to allow Cristiane, running into the box, to one-time it into the back of the net.

Sky Blue FC midfielder Thaisa contributed a goal in the 52nd minute, when another Marta cross bounced around inside the area before Thaisa buried her shot from about 10 yards out. The North Carolina Courage’s Debinha put away the final Brazilian goal in the 78th minute to round out scoring on the day.

The match can be viewed in its entirety here.

In her Göteborg FC debut, USWNT forward Christen Press scored in the 76th minute to put her side up, 1-0, over FC Rosengärd. Press received the ball near midfield and made a run towards goal, beating her defender before laying off a shot past Rosengärd keeper Zećira Mušović.

Press made headlines during the 2018 NWSL offseason when she was part of a blockbuster trade that sent her to the Houston Dash, and again when she subsequently refused to report to the club. On March 26 Press announced that she had signed a short-term deal to return to Sweden, signing with Göteborg FC.

Unfortunately for Press and her new club, Fiona Brown equalized for FC Rosengärd in the final minute of regulation to relevel the score just before the final whistle.

Week 4 of the 2018 NWSL continues on Friday night as the Portland Thorns FC host the Washington Spirit. Jamie Goldberg of The Oregonian previously reported that midfielder Tobin Heath, sidelined for the start of the 2018 season as she continued recovering from offseason ankle surgery, is set to make her season debut with the reigning NWSL Champions in the match. Heath was available off the bench last weekend for the Thorns home opener against the Orlando Pride but never entered the match.

The full report is below.

The home of the Chicago Red Stars will be renamed SeatGeek Stadium as of 2019. (photo by John D Halloran)

The Chicago Red Stars announced on Thursday that they had entered into a multi-year partnership with Wintrust Bank that makes Wintrust the official bank of the club, their reserves, and their academy team.

As part of the sponsorship, the Red Stars will have their own branded debit card, which will become available this summer.

Also announced on Thursday was the new title sponsor for Bridgeview Stadium, home of the Red Stars and MLS side Chicago Fire. Although many fans still refer to the Red Stars home stadium as Toyota Park, the stadium naming deal with Toyota actually expired in 2016.

That all changes at the start of the 2019 season, when the Bridgeview stadium will officially be renamed SeatGeek Stadium. SeatGeek is an online event ticket marketplace that is a competitor for the likes of StubHub.

The joint statement released by SeatGeek and the Village of Bridgeview also referenced some plans for new development around the stadium, including a hotel and retail center.