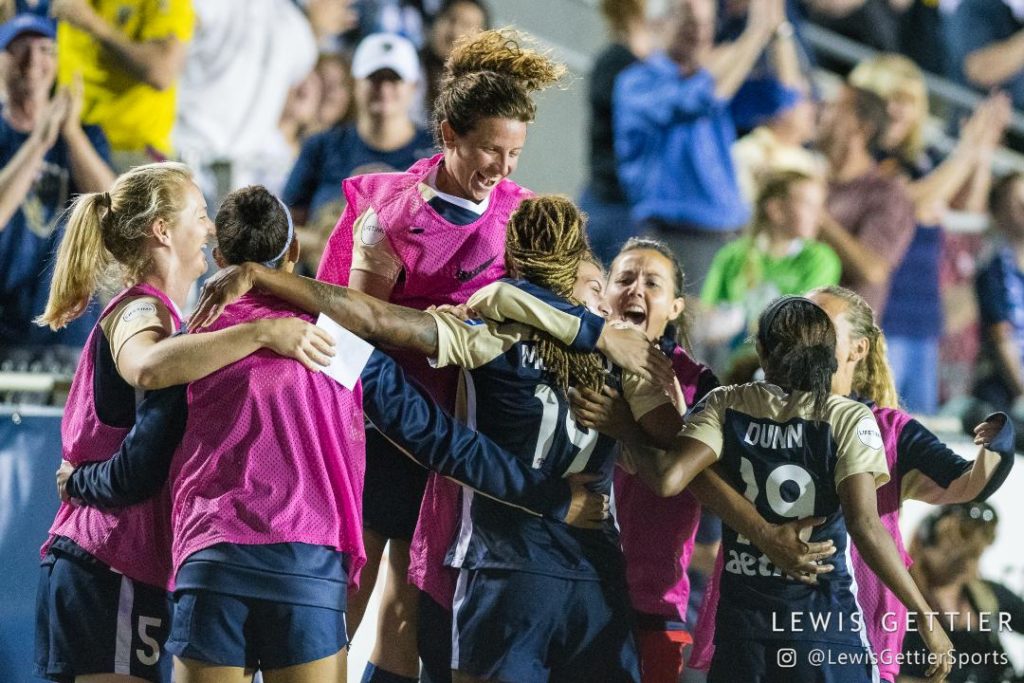 In a battle of the only two NWSL sides yet to drop a point, the North Carolina Courage downed Seattle Reign FC, 1-0 on a 70th minute goal from Jessica McDonald. The win gave the Courage their second successive 4-0-0 start while the Reign lost for the first time after opening the season with a pair of victories.

McDonald’s goal came via a quick counter attack after Reign substitute Jasmyne Spencer got in around Kaleigh Kurtz and sent a cross that Courage keeper Sabrina D’Angelo did not handle. The ball skipped to the far post but no Reign players were available to take possession and Jaelene Hinkle began the counter. Hinkle found Kristen Hamilton who took a touch and then delivered a long, looping ball over the top that put McDonald in alone on Reign keeper Michelle Betos. McDonald took one touch, bodied off defender Lauren Barnes, and beat Betos to the keeper’s left.

McDonald had earlier been put through on a dreadful giveaway by Jess Fishlock but Betos came up with a huge kick save that knocked the ball off the post. Lynn Williams also had two near misses after being played in. She shot wide in the opening minutes of the second half and nearly doubled the lead on a through-ball from Samantha Mewis only to hit the post.

For the first time since moving to North Carolina, the Courage played without Abby Dahlkemper. The No. 4 pick in 2015 had never missed a start but was not in the starting lineup or on the Courage bench for this one. Her consecutive minutes streak ended at an NWSL record 5,850. The Courage did welcome back Mewis who played the final 17 minutes in her first action for any team since injuring her knee playing for the United States against Canada in November.

The Courage (4-0-0, 12 pts) continue to lead the table and will be right back at Sahlen’s this Saturday when they host the Utah Royals on Lifetime. The Reign (2-1-0, 6 points) dropped their first points for new coach Vlatko Andonovski. They are idle this weekend and next visit the Orlando Pride on April 28.

Sofia Huerta put this game away with the final goal against Houston. (photo copyright Lewis Gettier)

Chicago started this game on the front foot and never really relinquished control. With three games in eight days, Rory Dames practiced a little bit of squad rotation, returning Arin Gilliland up top while starting Sarah Gorden and resting Yuki Nagasato. Vera Pauw’s Dash, rested after both an international break and a bye week, stuck with the same defense that began the season but saw the debut of Thembi Kgatlana up top.

The game started off in the worst possible way in the 7th minute when Dash defender Kristie Mewis, facing her own goal as the backline scrambled to stop a Chicago counterattack, got on the end of a cross from Gorden and sent it into her own net.

Just three minutes later, Dash goalkeeper Jane Campbell failed to properly clear a ball and Chicago regained possession at the top of the box. Gorden received the ball on the left flank with plenty of space and passed off to Sofia Huerta, who took a shot. The ball deflected off a Dash player and caught Campbell leaning the wrong way. She was able to keep it out with her foot, but Lauren Kaskie got to the rebound and sent it into the back of the net before Campbell could recover. This was Kaskie’s first NWSL goal.

Chicago continued to dominate possession and play for the rest of the half, content to take their time and pass around the field as they built up attacks. They found success on the wings, particularly against Dash right back Rachel Daly. However, to start the second half, Lindsey Agnew subbed in for Kimberly Keever, moving to outside back while Daly pushed up the pitch. The effect was immediate as the Dash saw more of the ball and began to look like they could play their way back into the game. The Dash’s best chance came after Nichelle Prince subbed on and was played in behind Chicago’s backline, but Katie Naughton made a great recovery to deny Prince a clear look on goal.

In the 73rd minute, Campbell came up big with a huge save on a rocket from distance from Huerta, but she wasn’t to be denied for long. Just two minutes later, Danielle Colaprico dropped a ball into the box on a dime, and Huerta headed it into goal between two Dash defenders.

Houston tried to press for a consolation goal in the dying minutes, but the offside flag foiled their plans more often than not. They ended the match without registering a shot on goal. Both teams play again this weekend, with Chicago hosting Sky Blue on Saturday while the Dash travel to Orlando for Sunday’s match.

Abby Dahlkemper’s consecutive minutes streak ends at 5,850
Lauletta: Missing Rapinoe, dominating between the 18s, and the end of the streak