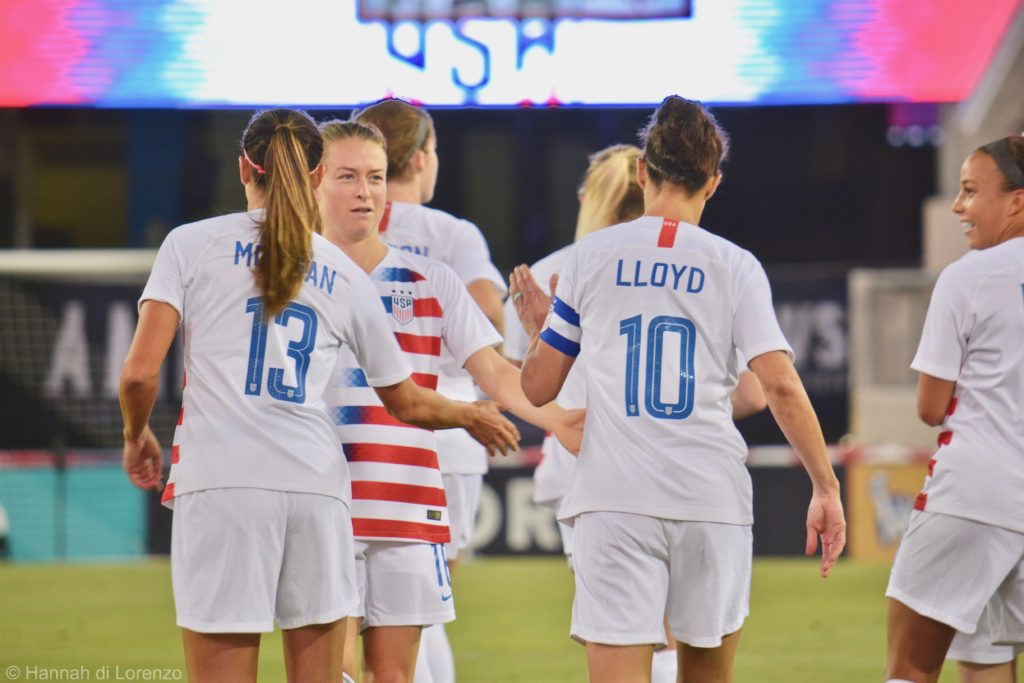 The United States women’s national team had an eventful match against Mexico on Sunday, defeating their Concacaf foes, 6-2, off of a brace from Alex Morgan and singles from Mallory Pugh, Lindsey Horan, Carli Lloyd, and Megan Rapinoe. Rapinoe also had four assists on the day, while Lloyd’s goal was the 100th of her international career.

Haley Hanson, Hailie Mace, and Tegan McGrady also made their senior national team debuts, while Jane Campbell earned her first start with the senior national team, starting in place of No. 1 goalkeeper Alyssa Naeher who did not dress for the match. Lloyd and Becky Sauerbrunn also returned to the starting XI, with the latter’s pairing with Tierna Davidson ending Abby Dahlkemper’s 15-game starting streak at center back for the USWNT.

On the other side of the field, Houston Dash backup goalkeeper Bianca Henninger, who got the start in the opening match in the series, returned to the bench in favor of Cecilia Santiago in goal, while Katie Johnson, who scored Mexico’s only goal in the U.S.’s 4-1 win Thursday night, was not present for the match, as she was attending her brother’s wedding.

As she did Thursday night, Mallory Pugh opened up scoring for the U.S., this time three minutes earlier than her previous goal. And, just like on Thursday night, Megan Rapinoe recorded the assist on Pugh’s goal, this time sending a perfectly-weighted through ball to the teen striker, who then cut around Santiago, who dove to the pitch in a final attempt to stop Pugh’s run. She was unsuccessful though, and Pugh easily slotted the ball home for the opening goal in just the third minute of competition.

Less than 15 minutes later, Mexico scored the first of two goals off of set-piece plays. Monica Ocampo struck first for the visitors off a corner kick that was poorly defended by the U.S., including Jane Campbell, who standing in the back of her own goal for some reason. That allowed Ocampo’s ball in to bounce untouched into the net to level the score.

Kiana Palacios followed Ocampo’s 17th minute goal with one of her own in the 24th minute, temporarily putting Mexico in the lead. Palacios’ goal was also scored off a corner kick taken by Ocampo as Palacios out-jumped the U.S. defense and flicked the ball in for her first international goal. However, Lindsey Horan pulled the USWNT back level a minute later, emphatically heading in a corner sent in by Rapinoe.

Lloyd then joined in on the scoring action, netting her 100th international career on what was a messy scramble inside the box by the U.S. The play gained momentum when Rapinoe sent in a cross that was too high for its intended target of Morgan. Horan got on the end of the cross though and sent it back in front of goal, but Santiago got a glove on it to deflect it. That allowed Morgan to get a foot on it, but she sent the ball high and short of the goal. Lloyd came crashing into the box and managed to head the loose ball into the back of the net to put the U.S. back in the lead and to become just the sixth player to score 100 goals for the USWNT.

The legend of @CarliLloyd grows. pic.twitter.com/fNFsArnRBy

Of concern for U.S. and NWSL fans are the early exits of Morgan Brian and Lindsey Horan, both of whom were subbed out during the first half due to injury. Brian was visibly shaken up after a hard challenge in the game’s opening minutes. In the minutes leading up to her goal, Horan was sitting and rubbing her calf after suffering an apparent non-contact injury while fighting for possession. Shortly after Lloyd’s goal, Horan pulled up on a run and then took a seat on the pitch, immediately removing her shin guards and again rubbing the same calf. She was subbed off in favor of Hanson, a move that the team said was simply precautionary.

Morgan would get her second goal in the second half, but not before Rapinoe got one of her own in the 64th minute. With Morgan making a dangerous run on goal, Santiago came off her line and slid to knock the ball away. However, she knocked the ball right to Rapinoe’s feet, and Rapinoe chipped the Mexico keeper to score on a wide open net.

Rapinoe tallied her fourth assist of the day—one shy of Tiffeny Milbrett’s single-game record of five—in the 69th minute when she sent in a U.S. corner that bounced inside the box and was bodied in by Morgan. The goal marked the second straight for Morgan, who also scored one in the team’s series-opening 4-1 win over Mexico on Thursday night.

With the win, the U.S. sweeps the two-game series against Mexico. Most of the players will return to their NWSL clubs, save Morgan Brian, who will return to Olympique Lyonnais, and the three collegiate players. The USWNT won’t take the field again until June, when they host China for another two-game series.