USWNT v Mexico: What to watch for

Will the USWNT and Mexico play open? Or will they be holding cards for a possible showdown in October? (photo copyright Patti Giobetti for The Equalizer)

The USWNT takes on Mexico later today in Jacksonville, Florida, the first of a pair of friendlies between the two nations. They wrap up the series in Houston on Sunday, but could meet again later this year at Concacaf World Cup qualifying. The US has historically been dominant in this series, but Mexico is capable of stymieing the Americans – their only win over the US came in the last World Cup qualifying tournament, forcing the US into a playoff versus Italy to secure their ticket to the 2011 Women’s World Cup. Here are a few things to keep an eye for these matches.

Who is in goal?

Head coach Jill Ellis made it clear before the SheBelieves Cup that Alyssa Naeher will be getting the lion’s share of games, trying to give the new #1 as much experience as possible before next year’s World Cup. However, neither Naeher nor longtime backup Ashlyn Harris is the USWNT keeper in the best form at the moment.

That honor belongs to Jane Campbell. She had a particularly solid match last weekend against the Utah Royals, making five saves, including this 1v1 kick save against Gunny Jonsdottir that won the NWSL’s Save of the Week.

In contrast, Harris was nutmegged by Mallory Pugh, and Naeher doesn’t appear to have completely shaken off her inconsistent form that lingered through much of 2017, gifting a goal to Christine Sinclair.

Campbell got her first cap a year ago, a 17-minute cameo against Russia in Houston, and then came on for the second half of a friendly against South Korea last fall. She’s earned a game of her own, perhaps again in Houston where she plays with the Dash, but the likelihood is that Naeher will get both matches once more.

The shallow depth of the fullback pool 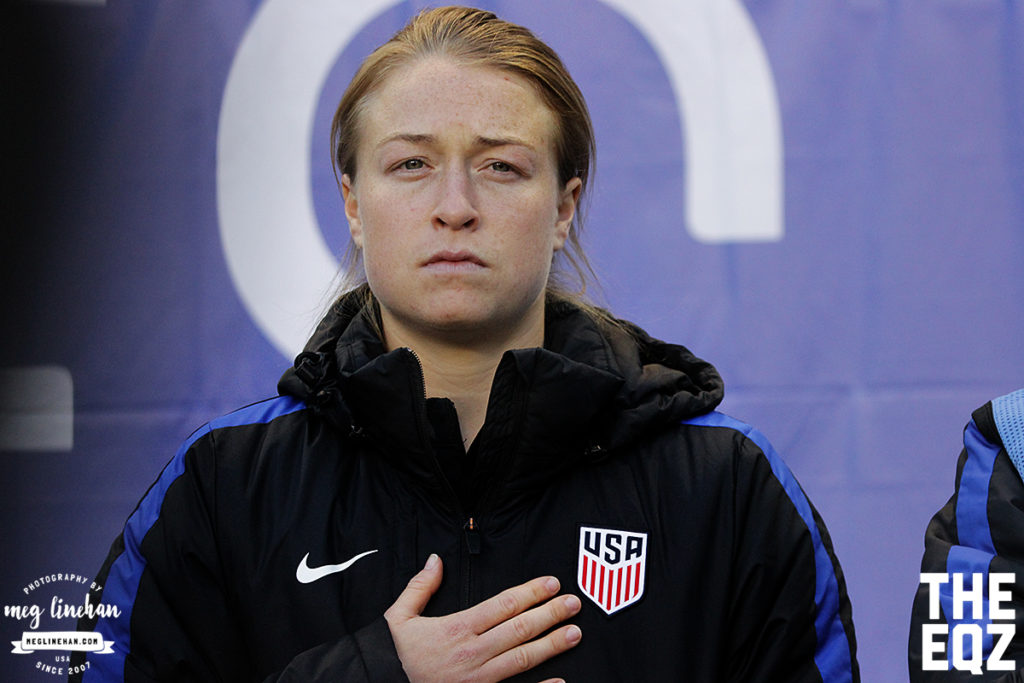 What do Sofia Huerta, Crystal Dunn, and Emily Sonnett have in common? They’re not fullbacks, not by trade, at least. But for Ellis’s purposes, they are now. Dunn at least came up through the ranks as an outside back before making the fruitful switch to forward. Huerta (who formerly played for Mexico before making a one-time switch to the US last year) is a forward or winger who converted to an outside back for the express purpose of trying to make it onto the USWNT. Sonnett is a centerback pressed into service on the flank.

That’s … pretty much it for the healthy fullback pool at this point. Tegan McGrady, a rising senior who plays left back for NCAA champion Stanford, was called in once Kelley O’Hara was ruled out with a hamstring injury, as was Haley Hanson, a rookie central midfielder for the Dash. That’s about as shallow a pool as it gets, with Casey Short joining O’Hara on the injury list, Taylor Smith out of favor after a poor showing at the SheBelieves Cup (and, judging by recent club and previous national team performances, probably not ready for this level), and World Cup starters Ali Krieger and Meghan Klingenberg completely out of the picture now.

Outside back has been Ellis’s focus since the World Cup, changing both the playing style and the personnel, and she’s tried more players there than anywhere else. Despite that, her search for her ideal fullback continues, but somehow the pool looks increasingly dire. The flanks are a big question mark for these two games, particularly notable now as the favored 4-3-3 formation relies on the outside backs to provide width and playmaking. Mexico would do well to exploit the USWNT inexperience.

Mexico’s ties to the NWSL

Bianca Henninger could appear for Mexico in her home stadium in Houston. (Photo Copyright Clark Linehan for The Equalizer)

Some may have forgotten that the Mexican Football Federation was a founding partner in the earliest years of the NWSL, underwriting the salaries of Mexican allocated players just as the Canadian and American federations continue to do. They’ve since departed as playing time for Mexican players dwindled and those players sought more minutes in other leagues.

Since then, Mexico has launched its own domestic league last year, Liga MX Femenil. A successful domestic league can be crucial to the success of a national team and in fact was the stated goal in the formation of the league. Rather controversially, the league is only open to those players born in Mexico, thus leaving out many of those who play for the national team at all age levels, and is also a U-23 league (with each team allowed four overage players, two of whom may dress each match). With such an age restriction, it will take some time for the effect of a domestic league to make a noticeable impact on the national team.

That said, Mexico’s roster still has plenty of NWSL and US ties. Two players currently play in the NWSL, Bianca Henninger of the Houston Dash and Katie Johnson of Sky Blue, while a third, Christina Murillo, is currently with the Red Stars Reserves. Kiana Palacios was a 2018 draft pick by Sky Blue, and four players currently play college soccer in the US. The roster is also spotted with former NWSLers, including Bianca Sierra, Mónica Ocampo (the roster’s most capped player), and most notably, Renae Cuéllar, who scored the first goal in NWSL history.

Will Mexico go for it?

In their last match, during the group stage of the 2016 Concacaf Olympic qualifiers, Mexico bunkered down, and the US only won with a late, dubious penalty kick that was initially saved before Carli Lloyd sank her own rebound. I don’t think that’s going to be the case in these matches.

For one, they’re friendlies, not competitive matches, and teams tend to play more of an open game in friendlies where there is nothing but pride to lose. Concacaf has three slots available for World Cup qualifiers, with a fourth team going into a playoff match, and the US and Canada are likely to take two of the spots. The third will almost surely go to either Mexico or Costa Rica, who each picked up a victory in their recent pair of friendlies, and for Mexico to find success in October, they need to go for a win.

While there is a chance the coaches won’t want to reveal their cards too much given what’s at stake in October, it’s much more likely they’re using these games to take another look at who is best suited, and where, for not only qualifiers but the World Cup itself. To that end, new Mexican head coach Roberto Medina has called in a number of players who ply their trade in Europe, including Sierra, Kenti Robles, Greta Espinoza, Stephany Mayor, Cristina Ferral, and Ariana Calderón. Rather like the US, his roster is a good mix of established players and newcomers, although there are no uncapped players on this roster.

Of note here: while we are always careful to condition any talk of the World Cup with “But first we have to qualify!” and as noted above, that’s not always a given, it’s well known that Concacaf is not the most competitive of confederations. In fact, it’s in serious need of more actual competition. So for the sake of Concacaf, my hope is that both teams bring their A game and deliver an entertaining, ambitious match.

You can catch both teams at 7 p.m. EDT tonight on FS1 and Univision Deportes. Sunday’s match will be aired at 1:30 p.m. EDT on Fox.