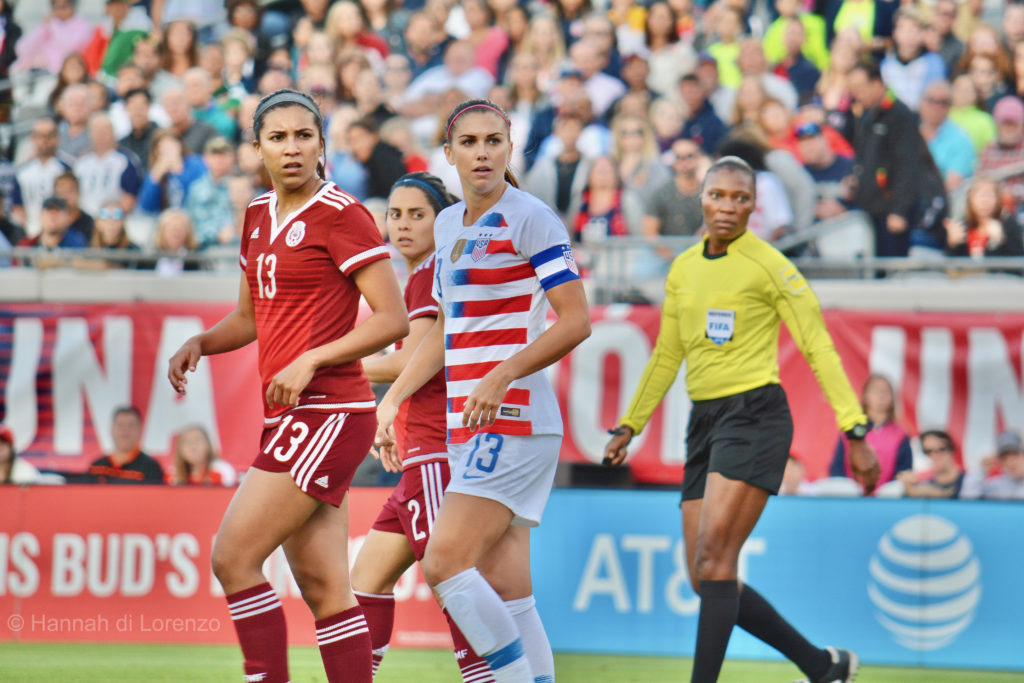 Alex Morgan finished with a brace in the USWNT's 4-1 win over Mexico on Thursday night. (photo by Hannah di Lorenzo for The Equalizer)

The United States women’s national team defeated Mexico, 4-1, in the first of a pair of international friendlies held six months before both teams will compete in the Concacaf Women’s Championship, the teams’ World Cup qualifying tournament. Alex Morgan finished the night with a brace bookended by goals from Mallory Pugh and Carli Lloyd. Katie Johnson put Mexico on the board in the second half to prevent the U.S. No. 1 goalkeeper, Alyssa Naeher, from securing the shutout.

The USWNT get on the board early, the product of a team goal starting with Stanford defender Tierna Davidson, earning her fifth cap with the USWNT. In the game’s sixth minute, Davidson intercepted the ball and found Morgan wide open in space. Morgan took one touch before playing the ball ahead for Megan Rapinoe, a pass that lured Mexico goalkeeper Bianca Henninger off her line. Realizing Henniger had her shot blocked, Rapinoe sent a sliding cross to Pugh, who, despite being sandwiched between two defenders, knocked the ball home to give the U.S. the early advantage.

Despite a number of other close calls for the U.S.—both offensively and defensively—including one especially dangerous chance for Mexico captain Monica Ocampo, the game went into halftime with Pugh the only player on the scoresheet. But that all changed in the second half, when the USWNT came out and unleashed a flurry of goals on Mexico, putting away three goals in three minutes.

The first of three U.S. goals in three minutes came in the 51st minute after Morgan was pulled down inside the area, resulting in a penalty kick for the U.S. Morgan stepped to the spot herself and sent the ball into the bottom far corner for her first ever penalty kick goal in a USA kit.

Morgan struck again in the 53rd minute after using an inside-out run to beat her defender and get on the end of a long ball from Lindsey Horan. Morgan’s ensuing shot kissed off the far post and into the back of the net.

.@alexmorgan13 is a national treasure.

The U.S. were comfortably up, 3-0, but only for a minute, as Carli Lloyd, who had just entered the game, scored with her very first touch of the match off a Horan cross. The goal was the fourth U.S. goal of the match and the 99th goal of Lloyd’s international career.

Lloyd’s goal was not the last of the night, however, as Johnson pulled one back for Mexico in the 64th minute. Bianca Sierra, formerly of the Washington Spirit and Boston Breakers, headed a clearance from Naeher that took a high bounce before being flicked on by Ariana Calderón. Naeher unsuccessfully rushed off her line in attempts of beating Johnson to the ball, only to have Johnson chipped her with a shot that bounced in for the lone Mexico goal.

Both sides had a few more opportunities on goal in the remainder of the match, but neither was able to capitalize, and the game reamined 4-1 in favor of the home team at the final whistle.

With the win, the USWNT improves to 33-1-1 all time over Mexico and remains perfect (4-0-0) on the year. The USWNT and Mexico will close out the two-game series on Sunday, when they take the field at Houston’s BBVA Compass Stadium. That game is scheduled to kick off at 1:30 p.m. ET.

USWNT v Mexico: What to watch for
Lauletta: USWNT front line is clicking, back line is slipping