Also in today’s roundup, Casey Murphy extends her contract in France, and the UEFA Women’s Champions League semifinals are set. 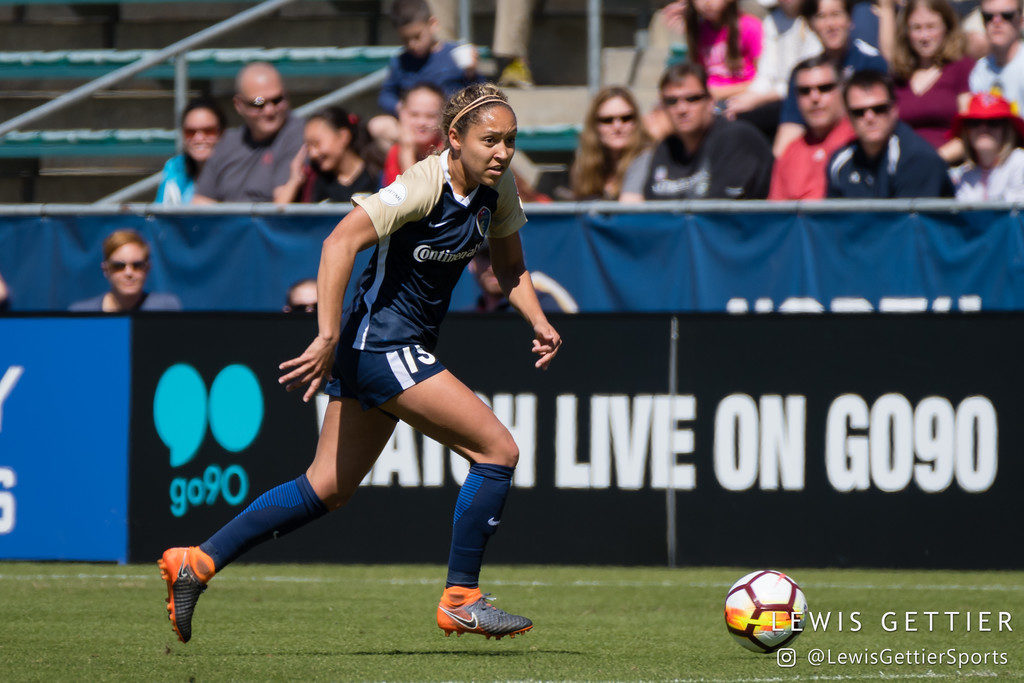 NC Courage defender Jaelene Hinkle (15) during a match between the NC Courage and Sky Blue FC in Cary, NC in Week 2 of the 2018 NWSL season. Photo by Lewis Gettier.

Paul Riley isn’t taking it easy during the NWSL’s international break. Fresh off their back to back wins to open the season, the North Carolina Courage will scrimmage Duke University this Friday in Durham, North Carolina. Duke is one of the few local college soccer teams that the Courage did not face in preseason, as they took on the University of North Carolina, Wake Forest, and NC State.

The scrimmage is part of the 2018 US Soccer Development Academy Spring Showcase, taking place April 6-10 in North Carolina. The showcase will feature teams from the Courage’s development academy, as well as those of fellow NWSL sides Sky Blue, Orlando Pride, Houston Dash, Washington Spirit, Portland Thorns, and Seattle Reign.

Last season Duke make it to the semifinals of the NCAA College Cup, falling to UCLA on penalty kicks after two overtimes. The NWSL is spotted with Duke graduates, including Becca Moros, Christina Gibbons, and Rebecca Quinn. In 2018 Duke tied an NWSL record for the most picks in a single draft with six.

Goalkeeper Casey Murphy announced today that she has extended her contract with Montpellier HSC of France’s Division 1 Feminine. The Rutgers product, a second round draft pick by Sky Blue in January, had originally signed through June and planned to join Sky Blue at that time. Montpellier currently sits in second place in the league. Murphy made her Champions League debut last week as Montpellier went out in the quarterfinals to Chelsea.

Murphy was a standout with the US youth national teams and has spent time in camp with the senior team, although she has not been called back in since heading to France.

I am very happy to announce I will be extending my contract with @mhscofficiel . I can’t wait for more exciting opportunities and experiences with this club. #TeamMHSC ? ? A special thank you to my family and boyfriend for all their support!

UEFA announced the dates and venues for the 2018 Women’s Champions League semifinals today. The first leg will take place on Sunday, April 22, while the second follows a week later on April 29. Chelsea will take on two-time champion Wolfsburg, home of former NWSL player Ella Masar, while Manchester City will face Morgan Brian’s Olympique Lyon. Lyon are the current holders of the title, winning back to back in 2017 and 2016. The only English side to ever win was Arsenal in 2007.

Dates, times, venues confirmed for #UWCL semi-finals: both ties Sunday 22 April & Sunday 29 April – who will make it to Kyiv?
? pic.twitter.com/pKLw1z5bus