It’s the second Soccer Saturday of the 2018 NWSL season, with six teams scheduled to take the field throughout the day. Here’s a quick recap of all of the day’s WoSo action around the league. 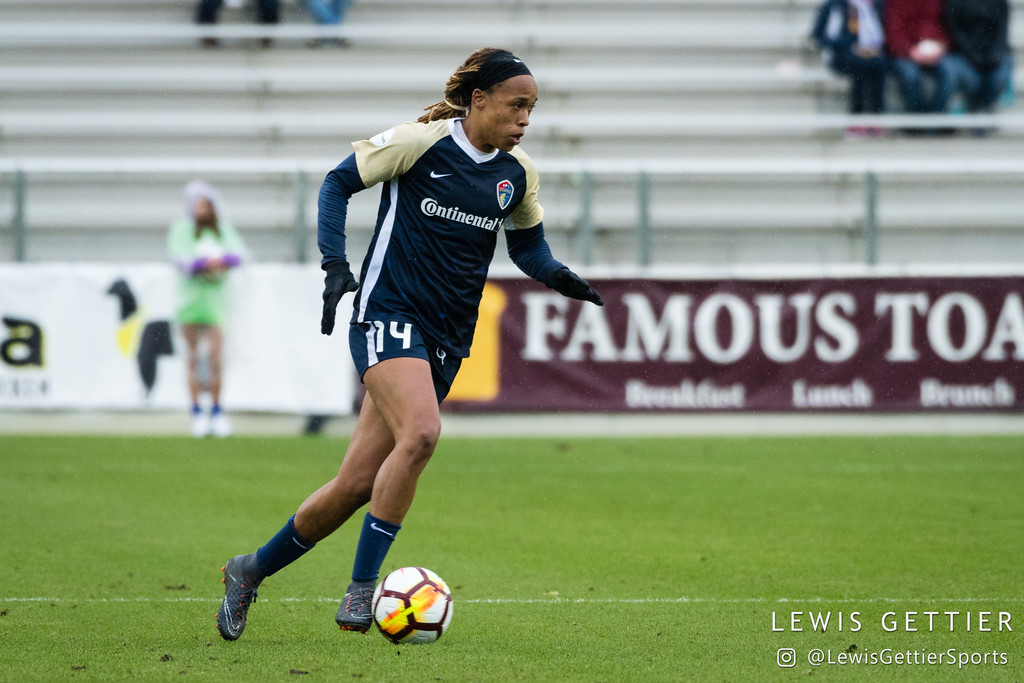 Jessica McDonald scored in the 92nd minute to keep the North Carolina Courage off to a perfect start in 2018. (photo copyright Lewis Gettier)

After 90 minutes of scoreless regulation time, a second-half stoppage-time goal by the North Carolina Courage’s Jessica McDonald earned the home side three points over Sky Blue FC. The goal was a late one coming for the Courage, who outshot Sky Blue 23-3 throughout the contest and had a number of missed opportunities on goal, especially in the second half.

The first such opportunity came in the 49th minute when Lynn Williams slipped behind the defense, chested the ball down, and fired off a shot, sending it high of the mark. Five minutes later Kristen Hamilton put a shot on frame that looked to have beaten goalkeeper Kailen Sheridan, but she put her shot literally on frame, bouncing it off the far post. Both Williams and McDonald had other chances on goal later in the second half, but both players’ headers went just wide.

McDonald was finally able to break the deadlock in the final minutes of the match after Jaelene Hinkle took possession deep inside the Courage’s defensive half and moved it forward. Hinkle split a pair of defenders with a through ball for McDonald. Sheridan came charging off her line in attempts of cutting off McDonald’s view of the goal, but McDonald cut around the diving keeper and easily finished into an empty net.

Both teams will enjoy a week off in observance of the international break before reconvening for Week 3. The Courage will take to the road for their first road match of 2018, taking on the Washington Spirit on Saturday, April 14, followed by Sky Blue’s home opener against the Seattle Reign on Sunday, April 15.

Mallory Pugh broke a scoreless deadlock with a goal in the 80th minute and Ashley Hatch added an insurance strike in the 88th to give the Washington Spirit their first win of the season, 2-0 over the visiting Orlando Pride. The loss snaps the Pride’s regular season unbeaten streak at 10.

The breakthrough came after a brief Pride attack was dismissed by the Sprit and Christine Nairn slid in to play the ball back to her defense. But Hatch found it first and headed it down to Pugh who had an acre of space on the left flank. The 19-year old worked her body to stay in front of Ali Krieger’s recovery run as she cut in side and beat Harris low to her left for the goal.

Pugh was involved in the Spirit’s second goal as well. In the 88th minute, Meggie Dougherty Howard muscled Dani Weatherholt off the ball and played a perfect pass to Pugh who had sneaked in around Shelina Zadorsky and behind Krieger. Pugh delivered a less than inspiring cross but Carson Pickett’s clearing attempt hung up for grabs inside the 18. Hatch beat Nairn to it and slammed home her first goal in a Spirit kit.

Aubrey Bledsoe, acquired from the Pride in the offseason, had her first win and clean sheet for the Spirit, making two strong saves on Sydney Leroux to do so. The match also saw the NWSL debut of No. 3 overall pick Rebecca Quinn who say on top of the Spirit backline for more than a half before giving way to Joanna Lohman. No. 1 pick Rose Lavelle remains injured though, and told Lifetime’s Dalen Cuff at halftime that she hopes to be back “in a few weeks.”

The Spirit (1-1-0, 3 points) are back at the SoccerPlex in two weeks to host the undefeated North Carolina Courage. A day later the Pride are in Portland. NWSL is dark next weekend for the FIFA window.

Two teams that struggled to create offense in Week 1 combined for five goals in Week 2 with the Portland Thorns emerging winners 3-2 over the Chicago Red Stars on opening night at Toyota Park. Christine Sinclair scored twice for the Thorns and Alyssa Mautz did the same for the Red Stars, all after Lindsey Horan opened for Portland.

Horan’s 9th minute goal came off a Meghan Klingenberg corner kick that deflected off Horan and Sofia Huerta before Horan made a quick turn-and-shoot that left Alyssa Naeher helpless.  The Red Stars got even when Summer Green fought her way through Celeste Boureille and Kelli Hubly at the top of the penalty area and laid it off to Huerta. Huerta then found Mautz whose shot took a deflection off Meghan Klingenberg and in.

Near the end of the opening half Samantha Johnson played a soft back pass to Naeher and Sinclair beat the keeper to the ball and had an open net to tap it into. Sinclair made it two from the spot in the 65th minute after Danielle Colaprico inexplicably stuck her hand out and was whistled for handling it in the box. Two minutes later, Mautz pulled the Red Stars back within a goal. Green played a cross from the left that was headed but not cleared by Klingenberg. Mautz wound up with it on the right side and her cross found Mautz for the finish.

The Red Stars nearly had an equalizer twice in stoppage time. Erin Yenney may have had Thorns keeper Adrianna Franch beat but her shot did not have enough pace and Franch was able to scramble across her line and smother it. Less than a minute later Huerta turned from about 25 yards and ripped a shot off the crossbar.

The match was played as the second leg of a doubleheader following a match between the Major League Soccer teams from the same cities. In that one the Fire and Timbers played to a 2-2 draw.