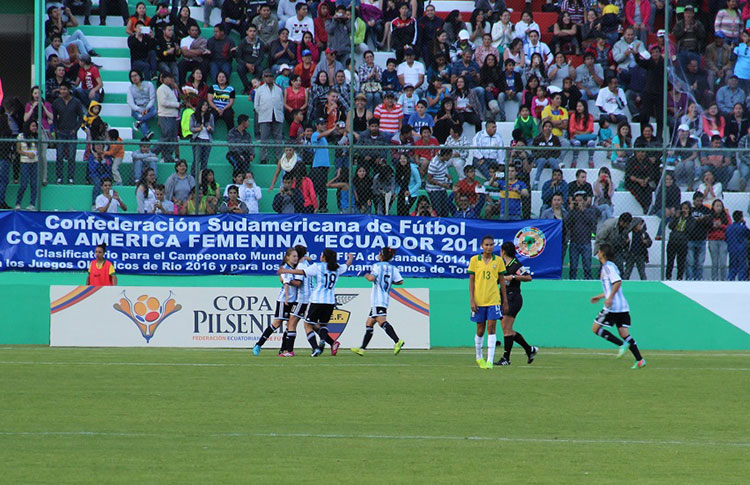 Qualifying in South America had to change locations due to poor field conditions one week before the tournament is set to begin.

Exactly seven days before the start of the Copa America Femenina set to take place in Chile for 2018, it was announced that due to poor conditions of the fields in Ovalle, there needed to be a back up plan as far as scheduling is concerned. This tournament for CONMEBOL is set to serve as qualifying for South American teams to book their tickets not only to the 2019 FIFA Women’s World Cup in France, but also the 2020 Olympic Games in Tokyo.

The official statement said that “the condition of the playing field can compromise the safety of the players and does not minimize risk of injury, also compromising the performance of the game.” The field is not in a condition to host a professional game let alone a qualifying tournament for the two biggest world championship events in women’s soccer.

The location in Ovalle was supposed to host four group stage games. The games have been re-scheduled to be played at at an alternate location, at La Serena Coquimbo.

Heading into week 2 of the NWSL season, Chicago remains riddled with injury and Brazilians among others head out for international duty.

The Chicago Red Stars list of players ruled out from last week grew by one ahead of their game against Portland. Stephanie McCaffrey, who was not on last week’s report but was a late scratch due to illness, was added to the list this week due to the same illness. She joins Casey Short, Vanessa DiBernardo, Julie Ertz, Yuki Nagasato and Rosie White who were all ruled out last week as well.

Alex Morgan is listed as questionable for the Orlando Pride after entering concussion protocol after a collision in last week’s home opener against Utah Royals FC.

The Brazilians headed out for international duty after competing in the first game of the season. Yanara Aedo and Estefania Banini of the Washington Spirit will also be joining their national teams for Chile and Argentina respectively. The Matildas remain on international duty as well.

In other NWSL news, the Reign announced today that they signed forward Jaycie Johnson as a national team replacement player. She was drafted 27th overall in the 2017 NWSL College Draft by the North Carolina Courage, but a knee injury kept her out of the entire 2017 season. The University of Nebraska standout notched 42 goals throughout her collegiate career. She also spent time with the U.S. U-23 WNT in 2015.

China women’s national team head coach Siggi Eyjolfsson announced his 23-player roster ahead of the AFC Women’s Asian Cup set to take place in Jordan next month where China will look to qualify for the 2019 FIFA Women’s World Cup in France.

Eyjolfsson, former player and long-time manager of the Iceland women’s national team joined Chinese club Jiangsu Suning in January 2017 before being appointed by the Chinese Football Association to be the head coach of the national team this past November. He’s positioned to take China into qualifying against a competitive Group A where China will take on host nation, Jordan, Thailand and the Philippines. China has won the Asian Cup eight times before.

Goalkeeper Zhao Lina has returned to the squad despite announcing her retirement from international soccer in January after the Four Nations Tournament.

Veteran midfielder Wang Shuang is expected to lead her team in the tournament that kicks off next week. She has 70 international caps at the age of 23 and has already played in the 2015 FIFA Women’s World Cup, the 2016 Rio Olympics. In 2017, she was named Chinese Women’s Football of the Year.

China will also travel to the U.S. to take on the USWNT in a pair of international friendlies on June 7 and June 12 at Rio Tinto Stadium in Sandy, UT and at FirstEnergy Stadium in Cleveland, OH.

Midfielder Alli Magaletta recently signed her first professional contract with IK Grand Bodø in Norway’s first division. The WVU graduate was a “non-roster invitee” at Sky Blue FC’s preseason camp this past March, but she was cut with the first round of preseason cut downs.

A special good luck to Alli Magaletta, who just signed a professional contract with IK Grand Bodø in Norway! pic.twitter.com/fiTwdo0o5K