The Utah Royals will be without one of their biggest offseason acquisitions, Kelley O’Hara, for Week 2 due to injury. (photo courtesy of Utah Royals FC)

The Utah Royals FC will be without one of their most recognizable players for their Friday night road clash against the Houston Dash. The team announced today that Kelley O’Hara had been ruled out of their Week 2 contest in Houston due to a left hamstring strain.

O’Hara played the full 90 minutes at right back in the Royals’ inaugural match in Orlando last weekend. According to the team’s game notes, she picked up the injury sometime during that match.

The versatile defender has recently also been recovering from a mild knee injury, and she was seen wearing a knee brace during the SheBelieves Cup. She played 327 minutes over the USWNT’s first two cup matches before remaining on the bench for the finale against England.

The team will also be without Elise Thorsnes, who suffered a concussion in last weekend’s match in Orlando. Thorsnes was injured in the 50th minute after colliding with Pride defender Ali Krieger while going up for a 50/50 ball. Although she initially left the field of play to be attended to by trainers, she reentered shortly thereafter before being substituted in the 62nd minute. 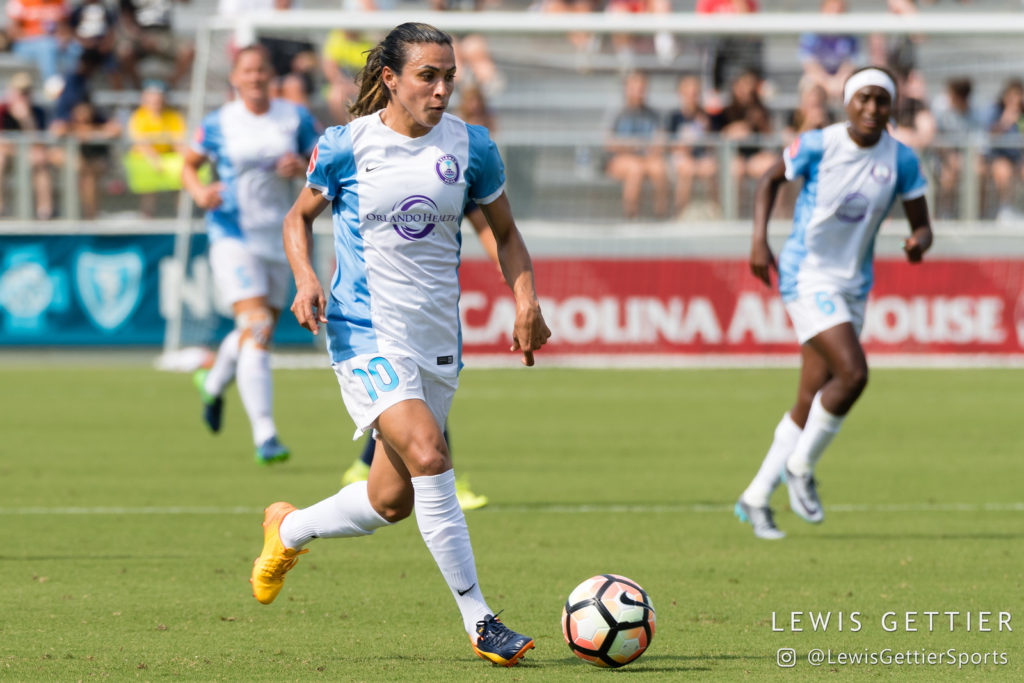 Marta is one of five international players the Pride will be without due to national team duty. (photo copyright Lewis Gettier)

The Orlando Pride and Washington Spirit both announced on Thursday that they had signed national team replacement players ahead of their Week 2 match in D.C. on Saturday.

The Pride have signed three replacement players to help compensate for the five international players—Australia’s Alanna Kennedy and Emily van Egmond and Brazil’s Marta, Monica, and Poliana—currently in camp with their national teams ahead of World Cup qualifiers.

Orlando have added midfielder Abby Elinsky and forwards Nádia Gomes and Christine Creighton. Gomes was taken by the Pride as the No. 23 overall pick in the 2018 NWSL College Draft, while Elinsky was drafted by the Dash before joining Orlando during preseason.

The Spirit added Mallory Eubanks to their roster as a national team replacement player in the wake of Estefania Banini’s call-up to Argentina for the Copa America Feminina. Eubanks was selected by the Spirit as the No. 16 overall draft pick this year before scoring an 87th-minute equalizer in the Spirit’s 1-1 preseason draw with the UNC Tar Heels.

The German squad for their April World Cup qualifying matches has been announced. (MEG LINEHAN/Equalizer Soccer)

Horst Hrubesch has named his Germany squad for an upcoming pair of World Cup qualifying matches. The squad is his first since being named interim head coach in the wake of Steffi Jones’ dismissal following the team’s subpar showing at the 2018 SheBelieves Cup.

Germany takes on the Czech Republic on Saturday, April 7 before facing Slovenia on Tuesday, April 10 as part of the teams’ attempts to qualify for the 2019 World Cup in France. Germany holds a perfect record against both teams (4-0-0 and 3-0-0, respectively).

“We realize that we are in the role of favorites, we have this claim ourselves,” said Hrubesch in the team’s official announcement. “We want to win these games, knowing our quality as a team and our responsibility, but we certainly will not underestimate the opponents.”

Among the 23 players named to the roster are Melanie Leupolz and Kristin Demann, both returning from injury. Turid Knaak also returns to the squad for the first time since the team’s friendly against Canada last year.

Before the match against the Czech Republic, Lena Goeßling will be honored for her 100th cap, which she earned when she subbed into Germany’s SheBelieves Cup finale against France, while Linda Dallmann will receive the national player of the year award.