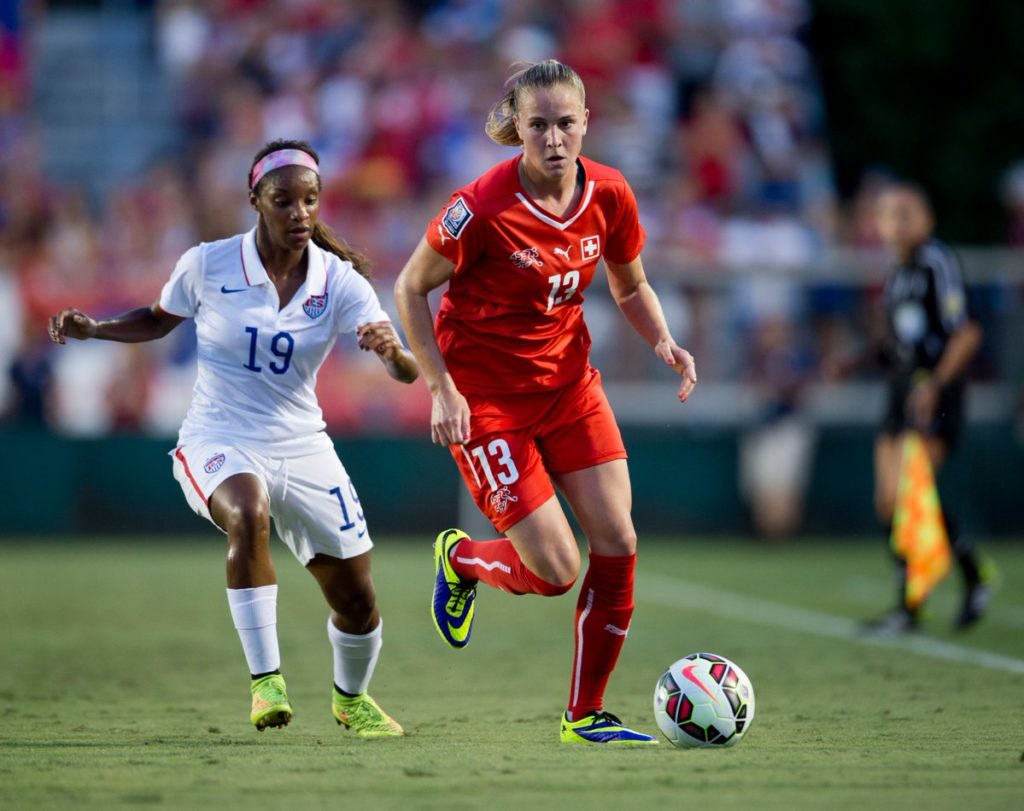 The Portland Thorns have dipped into the international market to sign Swiss striker Ana-Maria Crnogorčević. The 27-year old has spent seven years at Frankfurt where she was part of the UEFA Womens’s Champions League winning squad in 2015.

“With the injury to Caitlin Foord it was imperative we added a quality to our attacking group,” Thorns general manager Gavin Wilkinson said. “Ana is a talented player and a tremendous addition to this team.”

Crnogorčević will be added to the Thorns roster pending completion of her P-1 visa and International Transfer Certificate.  She has appeared in nearly 200 matches across all competitions for Frankfurt and Hamburger SV. She has tallied 41 goals in those games.

Foord was acquired by the Thorns in a three-way trade with the Reign and Sky Blue and signed a contract with the team. But she injured her foot late in the Australian season and is not expected to join the Thorns until midseason. The club also lost Amandine Henry and Nadia Nadim from last year’s championship team. Both elected to move to Europe.

“Wales will be my first competitive match in charge and it will be an incredible honor to walk out at a packed Premier League ground with this group of players,” Neville said in comments published on the FA’s official site. “I have been so impressed with how they have reacted to what I and the coaches have asked of them in everything we do on and off the field.

“In particular the young players have really taken their chance to shine. We are delighted to have Steph and Jordan back, but we also want to keep giving opportunities to the next generation coming through.”

Neville coached England to a 1-1-1 mark at SheBelieves but the April 6 qualifier against Wales at St. Mary’s in Southhampton will be the first match counted toward a major global tournament. Wales lead Group 1 in UEFA qualifying but England control the group, sitting a point back with a match in hand. Group winners qualify for next summer’s World Cup while runners-up have a path through a playoff.

England will later play away to Bosnia & Herzegovina on April 10.

Former Hofstra and Sky Blue player Leah Galton is taking a break from her playing career. The 23-year old Englishwoman made the announcement via Instagram.

“It has been a tough decision, but I have decided to take a break from playing football for now,” her post reads in part. “I am looking forward to spending some much needed time to focus on myself and other interests I have, to feel fulfilled in life and understand the place football has within it.”

It has been a tough decision, but I have decided to take a break from playing football for now. I am looking forward to spending some much needed time to focus on myself and other interests I have, to feel fulfilled in life and understand the place football has within it. I would like to thank FC Bayern Frauen, who have all been nothing but supportive and I’m very grateful for that. I want to wish all of you, club, team and players the best of luck. I’d also like to say Thank you to all the amazing people who have helped and supported me along the way and most importantly thank all of my teammates, who have become more like family. ❤️

Galton was the 13th player selected in the 2016 NWSL draft by Sky Blue and showed much promise as a speedy outside forward. Injuries always seemed to rear their head though and Galton rarely saw regular playing time as a result. She left for Germany following last season, but according to soccerway.com she played only 72 minutes for Bayern Munich.