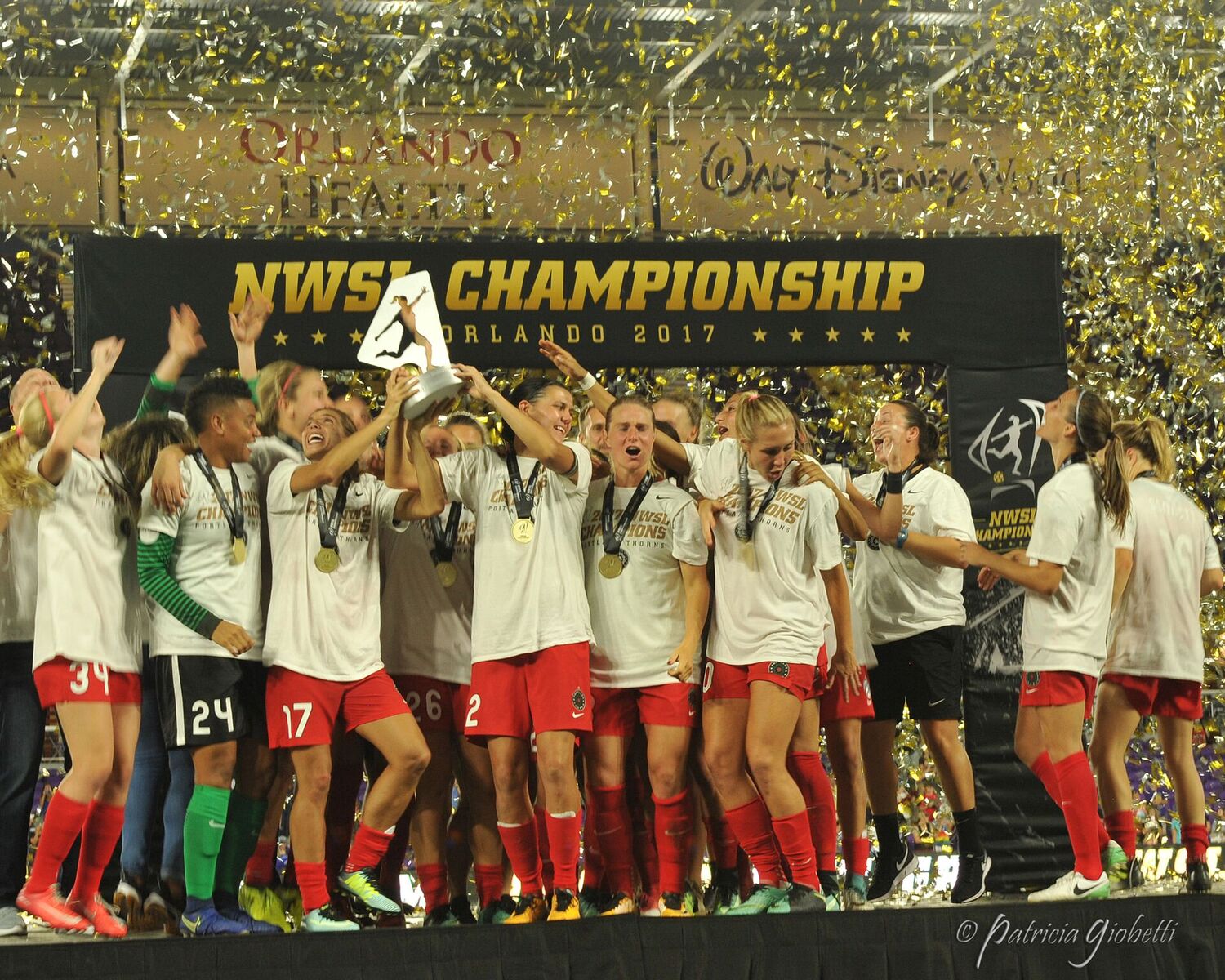 ’17 in Review:  Last year the Portland Thorns entered the 2017 season as the NWSL Shield holders and, as a result, were a favorite to win it all. However, the legitimacy of that seemed in question when midfielder Tobin Heath was sidelined for the vast majority of the season with a lingering back injury. It was uncertain how the team would survive without one of their star players, but a shift in positions for Christine Sinclair helped fill the void left by Heath’s absence. Sinclair’s attacking prowess, combined with another stellar season for Nadia Nadim and the best season in Hayley Raso’s NWSL career, helped Portland stay ahead of their opponents offensively.

On the other side of the field, goalkeeper Adrianna Franch grew over the course of the season into the best goalkeeper in the league, thanks partly to the tutelage of goalkeeper coach Nadine Angerer. Franch’s improved decision making, steady hands, and solid distribution made her a imposing presence in goal for the Thorns. She was helped by one of the best defenses in the league being in front of her, and together the Thorns’ back five led the league in shutouts.

Their biggest shutout of the season came in the biggest game of the year, the NWSL Championship. Although the Thorns finished second in points behind the North Carolina Courage in the regular season, they did what they had been unable to do in 2016 and advanced to the NWSL final, where they defeated the Courage, 1-0, to win their second league title.

What’s New:  Although the Thorns experienced one of the less tumultuous offseasons in the league, it was also not the easiest for Portland fans, as they had to say goodbye to some of the players they had grown to love watching play at Providence Park.

Two of the Thorns’ most commanding players, Amandine Henry and Nadia Nadim, returned to Europe after the final, signing with Olympique Lyonnais and Manchester City Women, respectively. The Thorns will also be without Icelandic midfielder Dagny Brynjarsdottir throughout the 2018 season, as she is expecting her first child.

USWNT midfielder and Portland Thorns original Allie Long was sent to the Seattle Reign in a trade that included the rights to Aussie Caitlin Foord, and former University of Florida standout Savannah Jordan, who joined the Thorns partway through her rookie season after a short stint in Scotland, was traded to Houston.

Kendall Johnson, who saw little playing time last season as she continued recovering from injury, was waived by the Thorns shortly after the NWSL Championship and has spent the 2018 preseason in camp with the Utah Royals.

Despite the losses, Portland fans had reason to celebrate, as the players Parsons brought in to fill in the roster vacancies would be key additions to any roster in the league. As previously mentioned, the Thorns acquired the rights to former Sky Blue FC defender Caitlin Foord in the trade for Long, and after a two-year leave of absence from the NWSL, the versatile Aussie’s return to the league is imminent.

The Thorns also signed another member of the Matildas this offseason, defender Ellie Carpenter. Although Carpenter won’t join the Thorns until after her 18th birthday (April 28), Parsons is high on the teen defender, saying she has the potential to be “world class” and an asset to the Thorns.

However, the player Mark Parsons seemed most keen on joining the Thorns is Brazilian midfielder Andressinha, who was acquired from the Houston Dash in the Jordan trade. Although Andressinha’s arrival to the team has been delayed by national team duty and a knock picked up during it, Parsons is excited about what she’ll bring to the team.

“I’m excited for her to join us because players like her is the reason why I fell in love with this sport and this game. She has a wonderful brain, great technique, and she sees things and feels things that not many players in the world do feel and see,” he said. “I’m excited for our team for her and for my soul that I get to watch this type of player day in and day out.”

Margaret Purce, Ifeoma Onumonu, and Angela Salem also joined the Thorns this year by way of the dispersal draft, and Purce and Onumonu put in solid performances during the Thorns Spring Invitational preseason tournament.

The Thorns also had another solid draft class, taking midfielders Sandra Yu and Gabby Seiler and goalkeeper Annabella Geist with their three picks.

If things click:  Any team coming off an NWSL Championship win will be an early favorite to return to the playoffs, especially with a roster like Portland’s, but so far only one team in the league has ever won back-to-back titles: the now-defunct FC Kansas City.

For Parsons, as much as the championship win was an “amazing victory,” the Thorns not only want to repeat as league champions, they want to be even better than before.

“Last year…we didn’t fulfill everything that we set out to achieve. We didn’t win the NWSL Shield and the Championship,” he said. “We didn’t play our best until the second half of the season. I think we finished, I think it was 11-1-1, the record the last 13 games, including the playoffs. And I might be twisting that, but the record is unbelievable. But it took us half a year to get to that, and that’s leaving us unfulfilled.”

Getting off to a better start won’t be easy for the Thorns though, which Parsons is more than aware. For starters, they’ll be without a number of key players at the start of season due to World Cup qualifiers for Brazil and Australia, and Heath is once again sidelined by injury and may not return until as late as Week 4.

Foord’s arrival in Portland has been delayed as she recovers from surgery to repair a  ruptured Lisfanc ligament and unstable foot joint sustained during the W-League playoffs. Although the Thorns would likely have been without Foord until the conclusion of the Asian Cup, Australia’s World Cup qualifiers, the team may now be without her until mid-season, although Parsons said that’s likely “worst case scenario.”

Whenever Foord does arrive in Portland, Parsons sees her not only filling in the scoring shoes of Nadim, but as being the attacker he feels the Thorns offense was lacking. Parsons has set the goal of being better offensively this year, and Foord is a player he says will help be just that.

“Wherever [Foord] plays—we see her in the front line for us—she can be one of the most dynamic forwards in this league and in a team that has been crying out for a dynamic forward up there to support Tobin and Sinc and Linds and the great work that has been going on so far with Hayley Raso.”

During preseason Purce has also proven to be a player who could help finish out the Portland offense, especially in the beginning weeks while other players are missing.

On the other side of the ball, Parsons said that the goal is to maintain being the best defense in the league. That shouldn’t be a problem, with Franch and defenders Katherine Reynolds, Emily Sonnett, Emily Menges, and Meghan Klingenberg all healthy and returning to the Thorns this year.

If fans were worried by the Thorns seemingly disappointing 0-2-1 record in preseason competition, Parsons is not. Instead, he’s pleased with the performances put in and lessons learned from preseason camp and competition.

“Preseason has always been about growing and preparing for the game ahead at North Carolina and Chicago away and Orlando at home, and preparing and getting organized for that.

“We’ve done some good work so far, and we’re going to continue that.”

“I think the Thorns will be not as good as everybody thinks. Henry, Nadim, [Long], you don’t replace those players with [the players they have]. It depends when they get Tobin back. For the quality of players that Portland has, to play in a 5-3-2 and be as direct as they are, I find disappointing. They roll up their sleeves and they make it a fight and they come in and they battle with you. Credit to Mark for getting that level of player to be willing to play that kind of soccer, but they’re capable of a lot more.”

NWSL preseason roundup: Clubs close out 2018 preseason with highs, lows
2018 NWSL team preview: Courage are an ‘even if’ team — not a ‘what if’ team