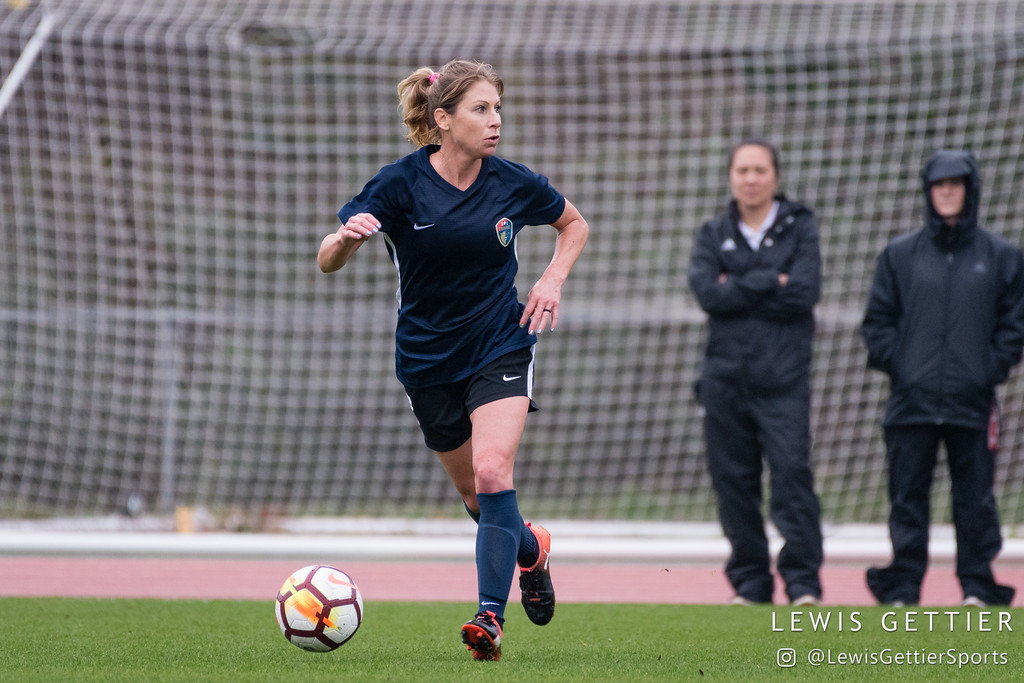 McCall Zerboni and the Courage are an ‘even if” team as opposed to a ‘what if’ team. (Photo copyright Lewis Gettier)

’17 in Review:  The 2017 North Carolina Courage managed to mix continuity with being the new kids on the block. After surprising many by winning the 2016 NWSL Championship as the Western New York Flash, the team was sold to North Carolina and relocated to Cary.

The Courage took no one by surprise in 2017, winning their first four matches and finishing every week — save one — at the top of the NWSL table. The Courage secured the Shield and then edged the Red Stars 1-0 on a late goal in front of a sold-out Sahlen’s Stadium in the semifinal round. Their title run ended a week later, losing the NWSL Championship by the same score to the Portland Thorns.

What’s New:  The Shield and second straight final did not move the Courage to stand pat. The club signed off on a blockbuster trade, moving U.S. national team outside back Taylor Smith and NWSL Rookie of the Year Ashley Hatch to the Washington Spirit for the rights to Crystal Dunn. Dunn promptly worked out a deal to leave Chelsea early and joined the Courage following the SheBelieves Cup.

The Courage also added the versatile Merritt Mathias in a trade with the Reign, plus Allysha Chapman and Julie King from the Boston Breakers dispersal draft. Since those Breakers players will not count against the roster limit this season, the Courage intend to carry 22 players. Yuri Kawamura won’t be new, but she played only eight matches last year before going down with a torn ACL. Darian Jenkins missed the entire season injured and has looked sharp in preseason.

“It’s like having another first-round draft pick,” Riley said of Jenkins, who was the No. 7 overall pick in 2017.

If things click:  The Courage claim to never mention the playoffs or any trophies, and they claim not to have revenge on their minds ahead of their season opener against the Thorns on Lifetime. Instead, said 2016 MVP Lynn Williams: “We have not a ‘what if’ mentality but an ‘even if’ mentality. So even if we go down in a game, we’re still going to figure out how to get the job done. Even if we lose one game, we’ll figure out how to bounce back to the next one.”

Riley used the even-if-what-if terminology last fall and Williams admitted that it is a “Paulism.” It also defines the Courage perfectly. They will need it to open the season as they will need to figure out how to win matches even if Sam Mewis does not get back on the field for a bit. Mewis was injured playing for the USWNT against Canada in November and has been rehabbing in New England. This weekend will be the first time she will miss an NWSL match due to injury.

“My hope is to get her into training sooner rather than later and hopefully a couple of games in we’ll have her ready,” Riley said. “She’s done everything she can trying to prep herself and get ready. I’d rather take the time now and have her miss three or four games.”

King and Kawamura are also not healthy enough to open the season for the Courage. Makenzy Doniak tore her ACL the first week of camp and will miss the entire season.

For the team to reach full potential, Riley will need to figure out how to replace Smith at outside back and how to successfully work Dunn into a lineup that did not have many holes to begin with. It is not without question that both items could be solved by Dunn replacing Smith, as she did to great acclaim in the final SheBelieves Cup match for the USWNT.

“Crystal Dunn is Crystal Dunn,” Riley said. “She can play a lot of different positions and we might need her to play a few different positions before it’s all said and done. She’s electrifying. What she has shown us with her speed and ability on the ball, and just her ability to be dynamic and be a game changer is another piece that we obviously like having.”

For the moment, Mathias looks to be Smith’s replacement at right back which will leave Dunn farther up field trying to gain chemistry with Williams, Jess McDonald, and Denise O’Sullivan, among others. Chapman adds more depth to the fullback position.

The 2017 Courage played through midfield much more often than the 2016 Flash, and with a full season of O’Sullivan — combined with the return of Deninha and the ever-underappreciated McCall Zerboni — they figure to be able to continue that trend. Dunn will also allow Riley to press high as often as he would like.

In goal, Riley will have to make a call between Sabrina D’Angelo, MVP of the 2016 NWSL Championship, and Katelyn Rowland, who supplanted D’Angelo during the 2017 season. He said the margins are paper thin — in a good way — but that he does not want a 50/50 split of games and is not a big believer in just throwing matches at goalkeepers. So whoever emerges as Riley’s first choice this weekend figures to be there for as long as she plays well.

“They’re both really, really good. I’ll be honest with you it’s so hard to pick one right now.”

Riley said both keepers are driven by a desire to play internationally — D’Angelo to strengthen her position with Canada and Rowland to gain a foothold with the U.S.

Even if things don’t go perfectly, the Courage should have enough depth to contend for both trophies again in 2018.

“North Carolina is by far the most dynamic team in the league. They are always playoff contenders. They’re fast, aggressive, and they’re always going to be hard to beat regardless of where you play them.”