With the conclusions of the SheBelieves, Algarve and Cyprus Cups, as well as the closing of the recent FIFA window, international players are steadily returning to their NWSL clubs. As a result, clubs are making changes to their preseason rosters to accommodate those players reporting to camp, and in-market fans are able to see some familiar faces take to the pitch for their local clubs.

That, combined with the return of the NWSL regular season looming two weeks from Saturday, meant that this weekend’s action was cranked up a notch as the majority of clubs took to the field for some preseason competition. Here’s a quick recap of how this weekend’s preseason action has gone down so far. 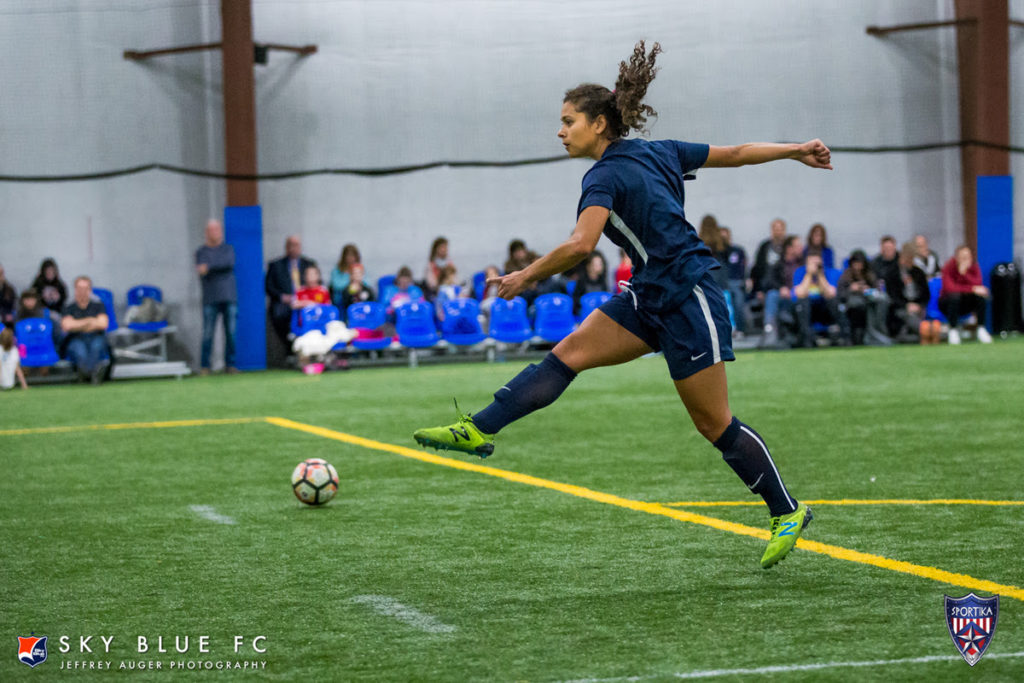 The lone goal was a Raquel Rodriguez penalty in the 29th minute after the Costa Rican midfielder was brought down inside the box. Rodriguez stepped to the spot to take the resulting penalty herself and easily converted it to give the pro side the win.

“West Virginia was a really good team for us to meet. They were well organized, and they are extremely physical,” said Denise Reddy, Sky Blue FC head coach, in the team’s official statement following the match. “Going against a team that switches from high-press to low-press and can play out of the back or go direct gives us a good picture of how an NWSL team will play.”

Sky Blue had a number of other opportunities on goal throughout the match, but a strong showing in goal by WVU goalkeeper Rylee Foster prevented the club from scoring any insurance goals. Caroline Casey played the full 90 minutes in net for Sky Blue, earning the clean sheet for the pros.

Sky Blue closes out its preseason competition at 2 p.m. ET on Sunday, March 18 against St. John’s University at Sportika Sports in Manalapan, N.J. 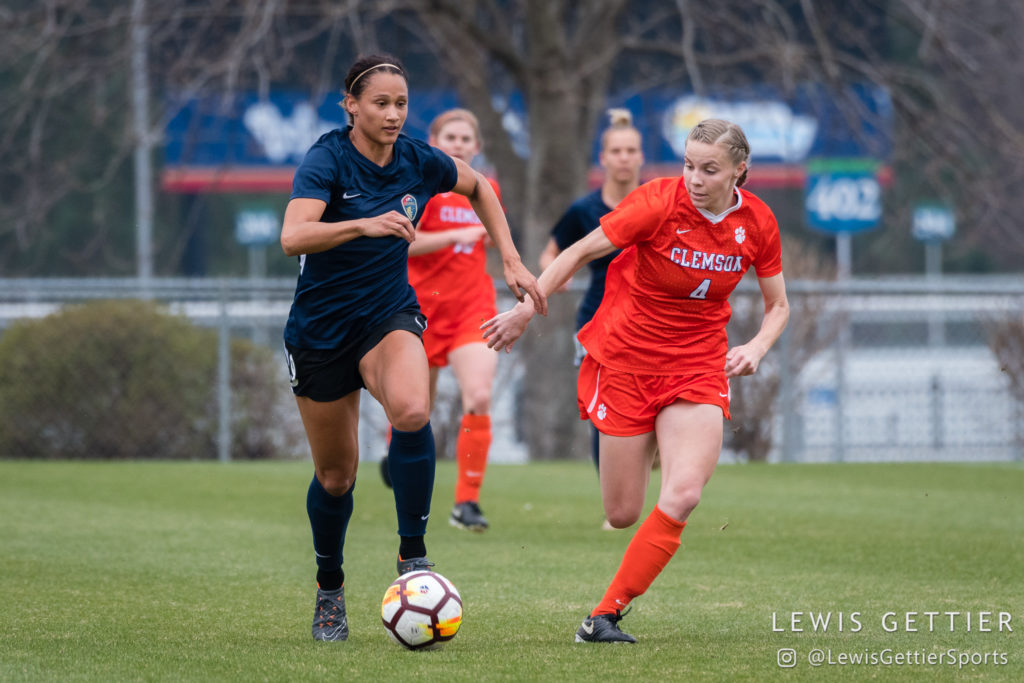 NC Courage forward Lynn Williams (9) and Clemson defender Alex Nillen (4) during a match between the NC Courage and the Clemson University Women’s Soccer team in Cary, NC in the 2018 NWSL preseason. (photo by Lewis Gettier)

The North Carolina Courage took to the field on Saturday, one day earlier than originally scheduled, as they hosted the Clemson Tigers. The Courage took a convincing 3-0 victory off the collegiate side courtesy of a single by Lynn Williams and a second-half double by Jessica McDonald. Crystal Dunn also made her debut with the Courage, playing in the midfield for Paul Riley’s side.

Williams started off scoring on the day for the pros in the first half, easily knocking in a through ball from defender Jaelene Hinkle into the back of the net from about 10 yards out to score the eventual game winner.

McDonald then opened the second half with a goal off a header. Although Darian Jenkins, who had previously scored four goals over three consecutive preseason matches for the Courage, didn’t get on the board herself, she did tally an assist on McDonald’s second goal of the day. In a bit of a one-two play with McDonald, Jenkins sent a low-rolling cross just outside of the goal box, which McDonald buried for the final goal of the match.

The North Carolina Courage continues preseason competition at 3 p.m. ET on Tuesday, March 13 with a match against Wake Forest University, before closing out their preseason calendar at 7 p.m. ET on Saturday, March 17 against the Washington Spirit at City Stadium in Richmond. 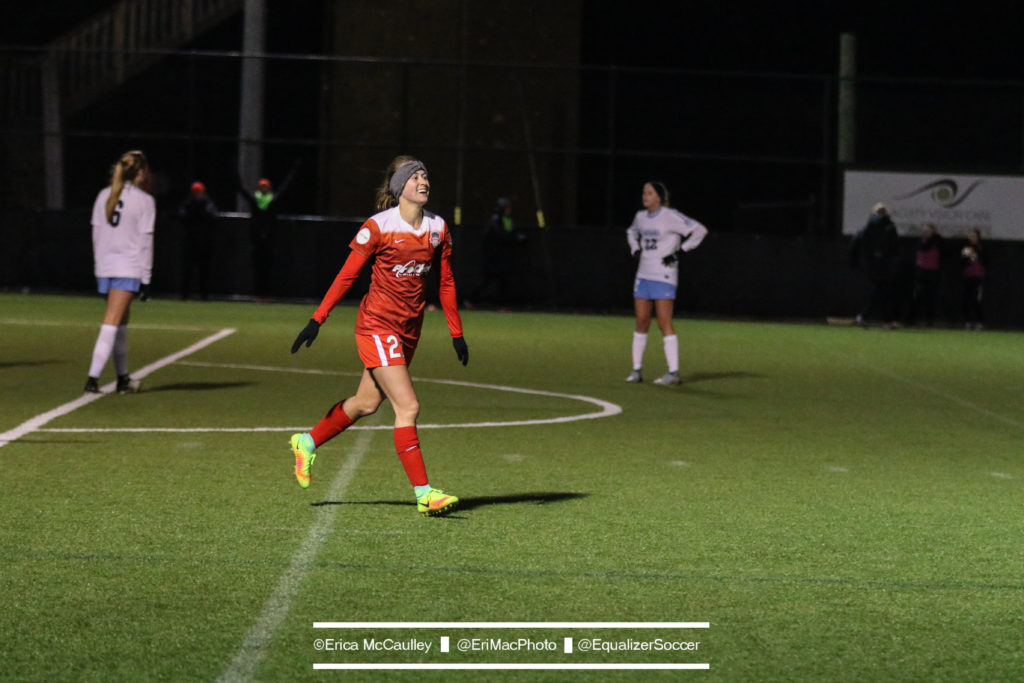 In their first of only two preseason matches, the Washington Spirit drew the University of North Carolina, 1-1, on Saturday night. Tar Heel forward Bridgette Andrzejewski scored for the collegiate side, while Spirit rookie Mallory Eubanks brought the game back level for the pros to prevent the upset.

Neither team was able to break the scoreless deadlock in the first half, but that all changed in the 66th minute when Andrzejewski headed the ball into the top right corner of the goal to put the Tar Heels on the board first.

Although the pros outshot UNC on goal, 11-2, they were unable to finish any of those chances until the final minutes of the match. In the 87th minute, Eubanks, the Mississippi State product taken as the No. 16 overall pick in the 2018 NWSL College Draft, pounced on a loose ball inside of the box and sent it into the back of the net for an unassisted goal.

The Spirit will close out their 2018 preseason competition against fellow NWSL side the North Carolina Courage at 7 p.m. ET on Saturday, March 17. That match will be held at City Stadium in Richmond, Va.

The Houston Dash opened the 2018 Thorns Spring Invitational with a 2-1 win over the U.S. U-23 women’s national team. Veronica Latsko and Amber Brooks scored for the Dash, while Stanford University’s Catarina Macario scored the lone goal for the U-23s.

The Dash put the first shot on target in the third minute of the contest, with Rachel Daly, once again playing at right back, connecting with rookie Kimberly Keever, only for Keever’s header to be stopped by goalkeeper Bella Geist. Geist is the only professional named to the U-23 squad for the preseason tournament after being taken by the Thorns in the third round of the 2018 draft.

Daly was able to tally an assist in the 17th minute, sending a cross inside the box for Latsko, who flicked the ball on from the spot. This time Geist was unable to make the save, and Latsko’s header found the back of the net to put the pros on the board first.

The Dash struck again in the second half when Kristie Mewis sent a free kick into the scrum inside the box, where it connected with Brooks near the spot. Brooks sent her header to the far post, beating the keeper and doubling Houston’s lead.

Macario brought the U-23s back within one in the 73rd minute when, in typical Macario fashion, she sent a free kick in from 20 yards out, over the wall, and into the left upper 90 to beat Bianca Henninger, who entered the game in Jane Campbell’s stead at the half. The U-23s nearly equalized twice following Macario’s goal, but both efforts went wide of the mark and the game remained 2-1 in favor of the Dash at the final whistle.

In the second of two matches in the first day of the third annual Thorns Spring Invitational, the hosts Portland Thorns fell to the Chicago Red Stars, 1-0. After a scoreless first half, Arin Gilliland scored the game winner for the visitors.

Although both teams had most of their internationals back with them, including Chicago’s Sam Kerr and Portland’s Christine Sinclair, Emily Sonnett and Lindsey Horan—as well as the injured Tobin Heath—a 15-minute cameo by Kerr was the only action any of that group saw on the day.

The game was a tale of two halves, with the Thorns maintaining possession and creating a number of opportunities on goal in the opening half, forcing the Red Stars backline and rookie goalkeeper Emily Boyd to make a number of big stops to walk away with the clean sheet.

The game began to open up around the half-hour mark, with momentum eventually swinging in favor of the visitors in the second half. Even so, neither team was able to find the back of the net until the 63rd minute when Gilliland, playing in the attack after an impressive scoring run for the Newcastle Jets in Australia’s W-League, took a shot from about 12 yards out that breezed past Eckerstrom and into the right of the goal to break the deadlock and hand the Red Stars the win.

The Thorns Spring Invitational continues on Wednesday, March 14 with the Red Stars taking on the Houston Dash at 4:3o p.m. ET, followed by the Thorns and U.S. U-23s at 10:30 p.m. ET.

Press willing to stay in NWSL — just not Houston
Monday Roundup: Tiffeny Milbrett up for Hall of Fame again; Mitts, Wagner too